Direct updates from ninth round of the season in Maryland.

Follow the ninth round of the 2021 Lucas Oil Pro Motocross Championship with direct updates from Budds Creek via Racefeed. 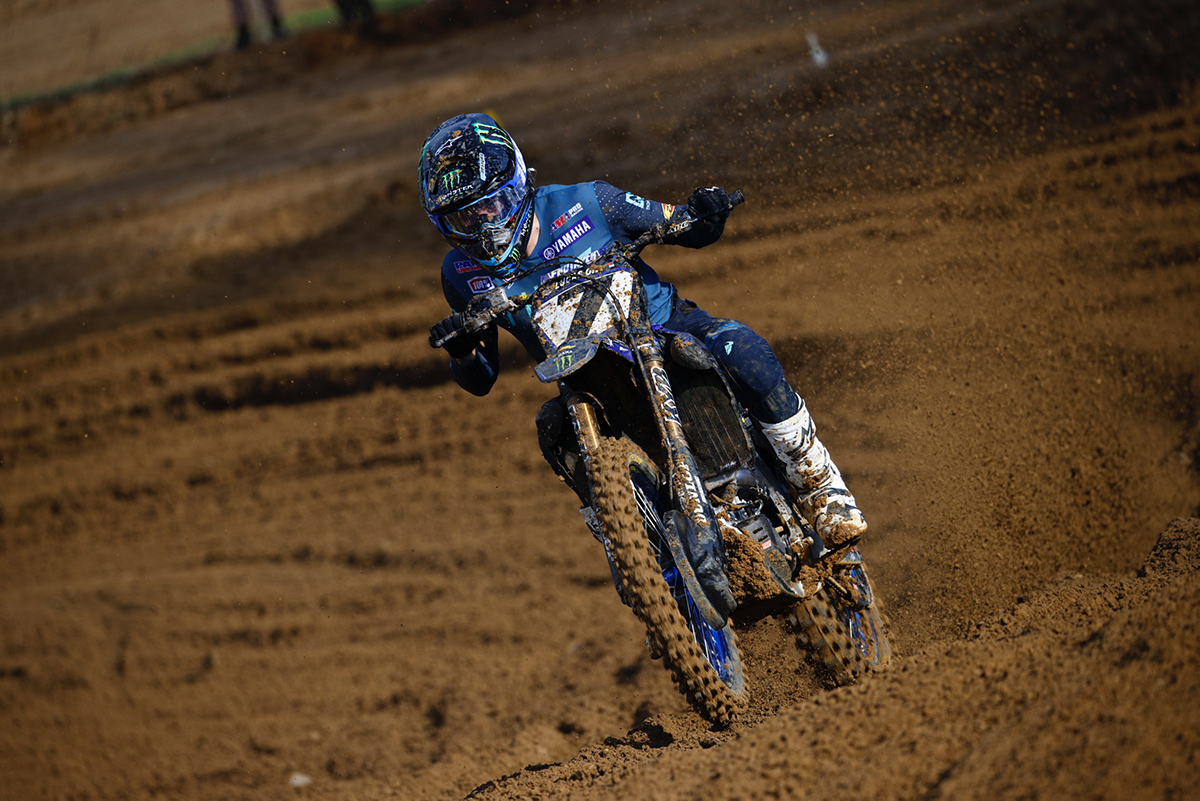 250 moto one:
The first holeshot of the day went to Cooper, from Swoll, Forkner, Garrett Marchbanks (ClubMX Yamaha), and Kitchen. Forkner made a move around Swoll in the opening lap, while Jett Lawrence worked to find his way to the front from seventh place. Cooper at the front was lapping over two seconds faster than the rest of the field, stretching out a three-second gap in the opening two laps. The battle for fourth was on at the start of the second lap, with Hampshire, Martin, Lawrence, and Masterpool all over Marchbanks for the position. Hampshire made the move on the Marchbanks, but by the end of lap three Cooper was over seven seconds ahead, lapping three seconds faster than Forkner in second. On lap six, Lawrence surged, making two passes and getting into fifth within two corners. Hampshire then hit the ground and dropped to eighth. Lawrence then worked his way into third and set out after Forkner who was four seconds ahead. With 10 minutes to go, Lawrence caught the back of Forkner, making the pass a few minutes later. Now just over five seconds back from Cooper, Lawrence was lapping over one second faster a lap than the leader. Cooper responded a lap later, gaining a second in the next lap with five minutes to go. Meanwhile, Martin caught Forkner in third, eventually making the pass with just over a minute to go in the moto. Cooper maintained the gap at the front and managed to take the win by five seconds over Lawrence, with Martin in third. Fourth was Forkner followed by Swoll, Hunter Lawrence, Shimoda, Masterpool, and Hampshire.

450 moto one:
Cooper Webb grabbed the holeshot with Roczen, Tomac, Sexton, and Savatgy in tow. Ferrandis was just behind, working his way into the top five in the first lap. Roczen made the move almost immediately to grab the lead early in the opening lap. After three laps it was Roczen, Webb, Tomac, Sexton, and Ferrandis in the top five, with Savatgy, Schock Plessinger, Jacob Runkles (GasGas), and Max Anstie (Twisted Tea HEP Suzuki) in the top 10. The battle for second heated up on lap four, with Tomac, Sexton, and Ferrandis catching Webb in front of them. Tomac made an impressive move to work his way around, with Sexton following suit shortly after then taking Tomac just a few corners later for second. Ferrandis made the move on Webb as well in the following lap, setting out after the duo in front of him on lap five. At the front, Roczen had just over seven seconds on his teammate in second with 20 minutes to go. Ferrandis caught Tomac with 12 minutes to go, making quick work of him to take third place with a solid move up the inside. Sexton began to close on Roczen, closing the gap to just over two seconds with five minutes to go, while Ferrands sat just four seconds back from him. With a minute to go, Ferrandis caught Sexton and a battle ensued. Lapped traffic stifled Sexton, allowing Ferrandis to take second place with Roczen five seconds ahead. On the final lap, Ferrandis had reeled in Roczen setting up a battle for the last half a lap. Roczen managed to hang on, edging out Ferrandis by under half a second. Sexton was third ahead of Tomac, Webb, Savatgy, Schock, Wilson, Anstie, and Musquin rounding out the top 10.

250 moto two:
Martin took the second holeshot ahead of Jett Lawrence, Masterpool, Forkner, and Hunter Lawrence with Cooper in seventh to start the moto. Martin and Lawrence began to stretch out a gap over Masterpool in third, as Cooper worked his way around Forkner to take fifth place. Masterpool hit the ground as Hunter Lawrence began to put pressure on him, allowing both Lawrence and Cooper around as he dropped to fifth. Martin maintained the gap at the front, keeping four seconds between him and Jett behind him with 17 minutes to go. With 10 minutes to go it was Martin at the front ahead of Jett, Hunter, Cooper, Forkner, Dilan Schwartz (BarX Chaparral Suzuki), Masterpool, Hampshire, Shimoda and Jarrett Frye (Monster Energy Star Racing Yamaha) in the top 10. In the end, Martin took the win and secured the overall ahead of Jett, Hunter, Cooper, and Forkner in the top five. Hampshire worked his way to sixth with Shimoda, Schwartz, Masterpool, and Frye rounding out the top 10.

450 moto two:
Roczen grabbed the holeshot with Webb, Ferrandis, Sexton, and Savatgy in the top five. As Roczen put some time between himself and Webb, Sexton began to pressure Ferrandis for third, eventually making a solid pass on Ferrandis as Tomac began to come into view behind them in fifth. Sexton then charged and found his way around Webb, setting sail after Roczen at the front. Tomac made the move shortly after to pass Webb and find his way into fifth on lap three. Out front, Roczen was three seconds ahead of Sexton with 20 minutes to go. With 16 minutes left, the top four riders had closed up, with lapped traffic coming into play and Tomac running the fastest laps of the race in fourth. Sexton made a mistake, allowing Ferrandis by and coming into the clutches of Tomac immediately. Sexton slowed a bit, allowing Ferrandis to get some time between them. Tomac sent it around the outside of Sexton to make the pass for third and began charging after the lead duo. With eight minutes to go, Ferrandis began to pressure Roczen, showing a wheel and eventually making the pass for the lead. Roczen regained ground on Ferrandis but was unable to make a move, giving Ferrandis the win and the overall, with Tomac coming home third. Fourth went to Sexton ahead of Musquin, Webb, Savatgy, Craig, Dean Wilson (Rockstar Energy Husqvarna) and Anstie rounding out the top five.