The eighth round of the 2021 Lucas Oil Pro Motocross Championship is in the books, with Ken Roczen sweeping the 450MX class and Jett Lawrence grabbing his first overall win since the opening round in 250MX. Both winners were made available to the media for this Debrief interview feature. 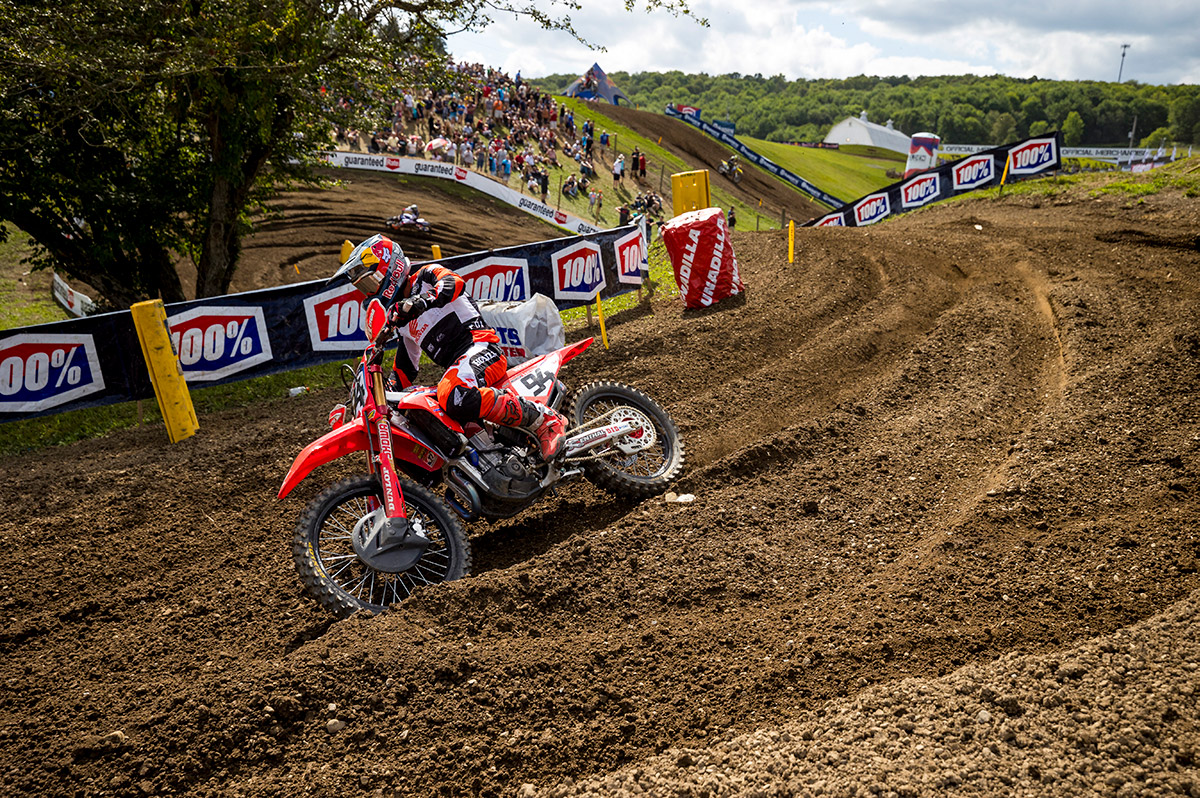 What has happened for you and Unadilla? You went 1-1 the last time there was a race here in 2019, was this track always like this for you or has something changed the last two times?

I honestly don’t know. I like the soil, it’s very similar to Colorado and with these long ruts, I don’t know what it is, if it’s something from where I grew up. You know, my track was clay and it gets really hard packed, but when it rained it was always really good. So that’s what I was around and then it gets rough and we had these long ruts. So for whatever reason it just suits my style a lot. I think I set up my bike [in a way] that works really well there also. I don’t know what it is, I definitely don’t come here thinking ‘oh, I’m going to be three seconds faster than everybody else,’ you know, it’s not like that, but Unadilla has just been good to me.

A couple of weeks ago you indicated you were struggling with a little bit of sickness. Did the two-weekend break help and how are you feeling now?

Yeah, definitely. I haven’t gotten actually ill like that in a while and then I just can’t seem to bounce back from it very quick. So it took me at least another week after Washougal to slowly start to feel somewhat normal. Then on the riding side of things I took a big step back in the beginning. Then I started coming around, I had my first good day of practice this past Tuesday, so it seems like it just kind of came around at the right time.

I feel like it was somewhat the same. I mean sometimes we just have a little bit of wetness in there. Some years we had rain and where the new old section is, we used to turn on the bottom right there and obviously have that long right-hand sweeper, those ruts used to be super long but we definitely had plenty of ruts out there today. I thought it was a very familiar, similar Unadilla.

Budds Creek is next on the list for the series, is it a track you enjoy and how are you feeling headed there?

Yeah, Budds Creek is a bit of a special place. I won the championship there in 2016, which of course is a while ago now. But in general, I do like going there, it’s a very unique track in my eyes. I also went there for the Motocross of Nations, I wasn’t racing but I came with team Germany. So kind of a special place for me to go there, I’ve race good there before and I’m looking forward to it. 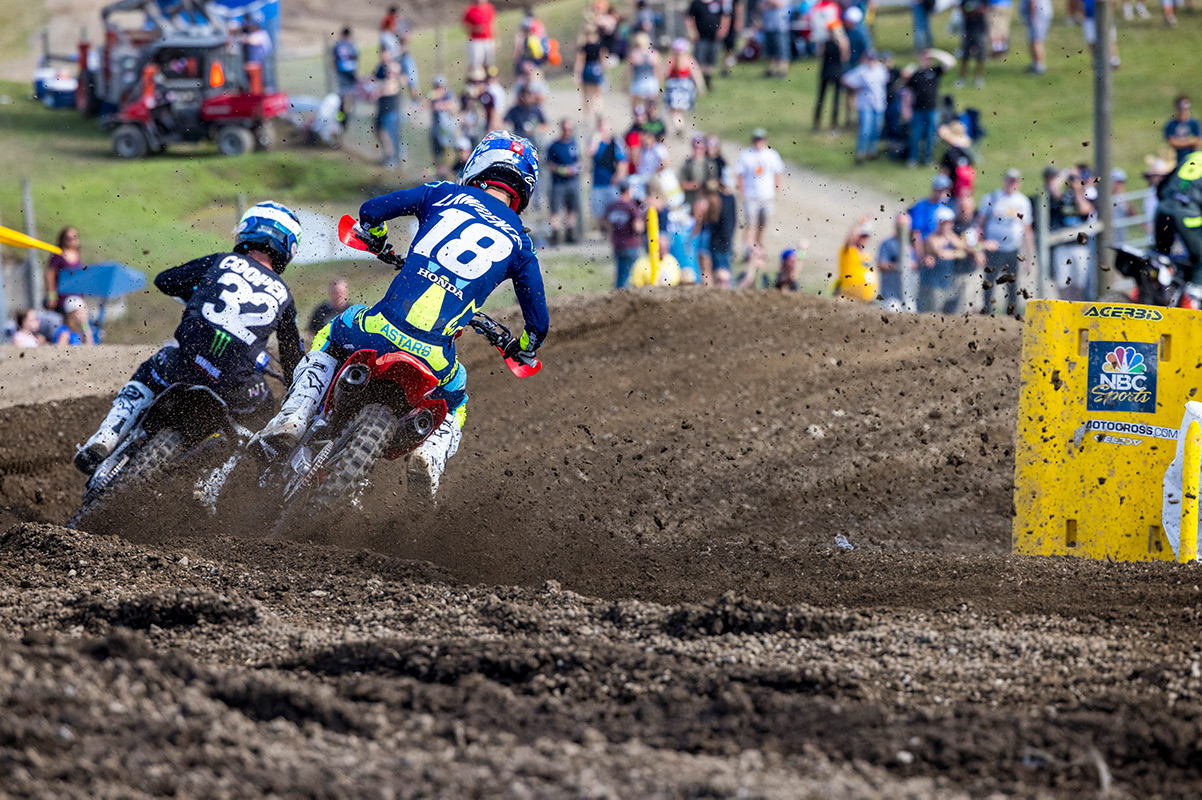 Jett, is this a kind of a race where the result will give you the mental edge to win this championship?

No, not really, I mean it’s obviously nice but I think a champion always thinks about the end goal and I just came in feeling pretty good because I really like this track – it’s more of a European track with all of the ruts and that. But no, I don’t think this has changed much of my mindset. I’m still gonna try my hardest and make sure I have a run for the championship and even if I don’t win it, I’m gonna try and make [Justin] Cooper’s life like hell on the track, but no it doesn’t change much, to be honest.

You obviously got the ball rolling today, staying up front getting the moto win and the overall win, kind of staying out of trouble. Was there anything that you did differently during the break, did you focus on one thing or can you talk about anything you did that may have lead to this?

No, not really. I just stuck to my same program – the program that Johnny [O’Mara] gives us is pretty good, so I kept sticking to that. My starts got better over the break which was good, and yeah like I said this kept me out of trouble, and was actually able to have a good fight with the front runners. It was definitely really nice to get those starts.

Is there anything you actually did for the starts or is it just a matter of don’t over-focus on it and just keep trying and eventually it will work?

I think it was just not believing in myself just knowing what you need to do and like kind of vision it, I think that really helped because the last few rounds I’ve been overthinking it so much and I keep screwing myself because I wanted to get such a good start. I think I just relaxed more and envisioned what I needed to do and it just kinda paid off.

Your first moto wasn’t terrible, but Cooper straight upbeat you in that one, the second one you turned it up to another level and beat Justin by a minute. Was there anything you changed in between or just with the track being that rough you started feeling more comfortable?

Yeah, that first moto Justin rode really well, I had some different lines and he had his lines sorted from the very first lap and he stuck with them every lap. I think he had a better and better flow throughout the race and I had some different lines, trying to see which lines could be faster. Those lines ended up blowing out so I was trying to find some other lines without trying to follow and yeah Justin just got away. Once you get that bit of a gap it’s really hard to try and close that in because we are all so close in speed. In the second one, I had really good lines that I was able to stick to, and because it was a little drier the ruts stayed a lot more. I just felt really good in that second one, I felt really strong and it kind of worked out in my favor.

With the last couple of rounds probably not working out the way you wanted – you hadn’t won an overall since the opener – were you getting down on confidence or down overall mentally at all or did you feel like eventually things would work back out your way?

I didn’t think I was getting down, I was just kind of getting more so frustrated in myself because I know I’m supposed to be up there with those guys and I just wasn’t giving myself the best opportunity. I was more so just disappointed in myself but I try and stick to my program that Johnny gives me and I know he’s done it and been through it many times with Ricky Carmichael winning his championships so I just stick to that and make sure I keep doing it every day. Even that just builds my confidence because I know I’m putting the work in.