Direct updates from round eight of the season in New York.

Follow the eighth round of the 2021 Lucas Oil Pro Motocross Championship with direct updates from Unadilla via Racefeed. 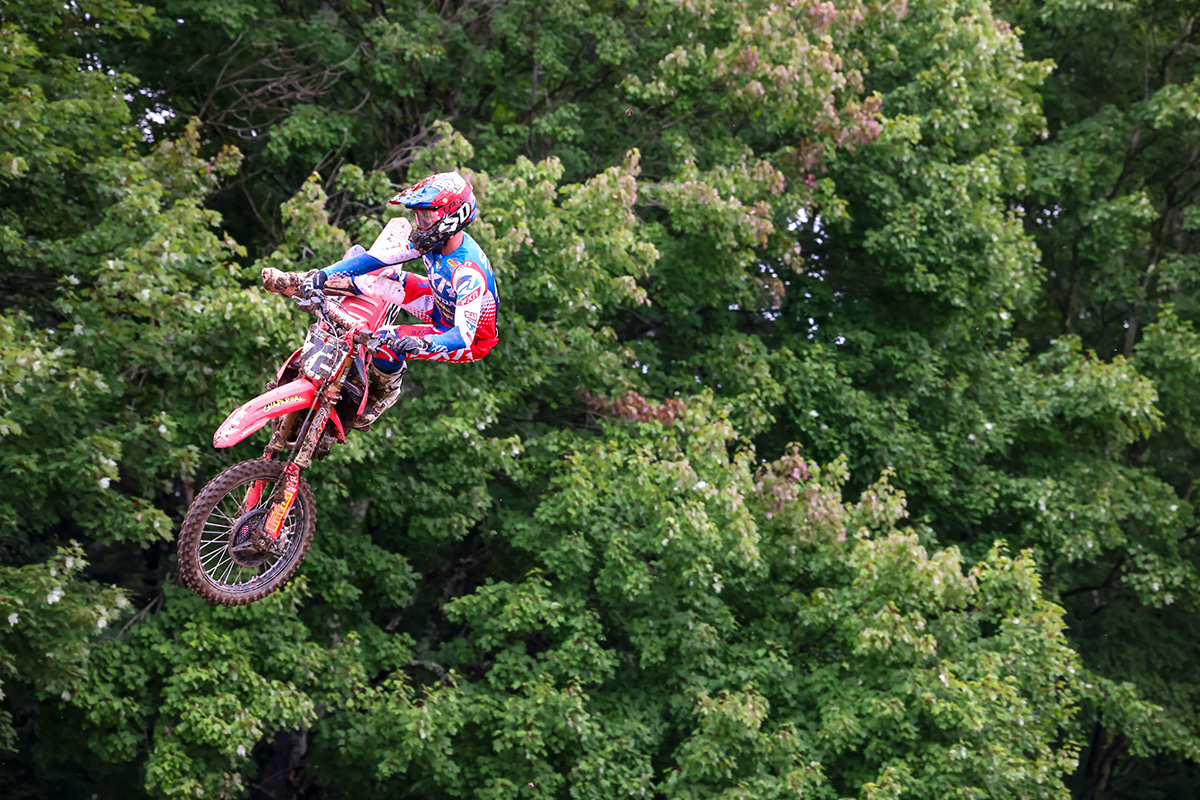 450MX moto one:
Roczen grabbed the opening holeshot followed by Plessinger, Webb, and Ferrandis as Sexton hit the ground hard, high siding on the exit of the second corner. As things settled out after one lap, it was Roczen at the point with Plessinger, Ferrandis, Bogle, and Webb in the top five. Sixth was Tomac followed by Savatgy, Musquin, Jeremy Hand (Honda), and Jace Kessler (Yamaha) rounding out the top 10. Tomac found his way around Webb in lap two and set his sights on Bogle ahead of him. After 10 minutes, Roczen was under fire from Plessinger as the duo broke away from the pack, stretching out a seven-second lead over Ferrandis. Deeper in the field a battle ensued between Bogle and Savatgy for sixth place, Savatgy getting the spot and setting out after Musquin in fifth. Musquin, however, was running a rapid pace and beginning to reel in Tomac in fourth. As the race ticked past halfway, Webb managed his way around both Rocky Mountain ATV/MC riders and into sixth place, while out front, Roczen maintained just over a one-second gap on Plessinger, with Ferrandis a further 12 seconds back. At the 10 minute mark, Plessinger hit the ground hard, destroying his motorcycle in the process. As he got to his feet, Roczen continued to stretch his lead, which was 14 seconds with six minutes to go in the moto. As Roczen maintained the gap with two laps to go, Christian Craig began to charge through the top 10, making his way into seventh with Max Anstie (Twisted Tea HEP Suzuki) in tow. That duo was chasing Savatgy who was applying pressure to Webb for fifth. In the end, it was all Roczen winning by just over 10 seconds ahead of Ferrandis, Tomac, Musquin, and Webb inside the top five. Sixth was Savatgy with Craig, Anstie, Bogle, and Brandon Hartranft (Twisted Tea HEP Suzuki) rounding out the top 10.

250MX moto one:
The first 250 holeshots of the day went to Cooper with Martin and Jett Lawrence, Schwartz, and Max Vohland (Red Bull KTM) in tow. Lawrence made quick work of Martin and set out after Cooper catching up to his back wheel by the end of lap one. Behind the lead duo after one lap was Martin in third, with Vohland, Hampshire, Hammaker, Hunter Lawrence, Swoll and Austin Forkner (Monster Energy Pro Circuit Kawasaki), and Ramyller Alves (GasGas) rounding out the top 10. Pierce Brown (TLD Red Bull GasGas) hit the ground hard after the first six minutes, as Jett Lawrence pressured Cooper for the lead out front, with Martin catching the lead duo simultaneously. At the halfway point, Hampshire had caught Martin for third, with the front duo nearly four seconds ahead of them. With 10 minutes to go Cooper stretched out a three-second gap over Lawrence, while Hunter Lawrence began to pressure Vohland for fifth. With two minutes to go, Cooper had upped the pace and stretched the lead to five seconds over Lawrence, eventually cruising to the win by just three seconds over Hunter Lawrence. Martin rounded out the podium, with Hampshire fourth and Hunter Lawrence in fifth. Vohland took sixth, as Shimoda, Swoll, Hammaker, and Carson Mumford (FXR Chaparral Honda) rounding out the top 10.

450MX moto two:
The second holeshot went to Sexton ahead of Webb, Roczen, Ferrandis and Musquin in the top five. Half a lap in, Roczen put a crafty move on Webb for second and set out after his teammate ahead of him. Webb then fell under pressure from Ferrandis, with Musquin just behind the duo. Ferrandis made quick work of Webb, with Musquin following suit soon after. After 10 minutes, Roczen made his way around Sexton, the duo over seven seconds ahead of Ferrandis in third. At the halfway point, Roczen led Sexton with Ferrandis 12 seconds behind the duo, as Musquin and Webb rounded out the top five. Craig was sixth, with Tomac, Schock, Dean Wilson (Rockstar Energy Husqvarna), and Anstie rounding out the top 10. Musquin applied some pressure to Ferrandis for the final spot in the podium as the clock ticked down 10 minutes to go. Ferrandis then responded and stretched the gap back out to four seconds. Sexton at one point closed the gap down to Roczen in the lead, but Roczen laid down a few solid laps in a row to maintain a five-second advantage with three laps to go. Roczen cruised to his second win on the day, with Sexton, Ferrandis, Musquin and Webb rounding out the top five. Sixth went to Craig, while Tomac, Wilson, Anstie, and Schock rounded out the top 10.

250MX moto two:
Cooper took the holeshot with Martin, Ty Masterpool, Hampshire, and Jett Lawrence in the top five. An opening lap battled ensued between Hampshire and Lawrence with Lawrence eventually taking third from the Husqvarna rider. Just ahead of them, Martin was having a go at his teammate Cooper for the lead, allowing Lawrence to catch them quickly. After five minutes, Martin made a run up one of the hills and made the pass on Cooper for the lead, leaving Cooper in the clutches of Lawrence, who made the pass quickly. Cooper retaliated immediately as Lawrence left the door open in the following corner. Lawrence left the throttle on around the outside a few laps later to take the spot from Cooper and began to charge after Martin in the lead. The lead duo stretched a five-second lead over Cooper almost immediately and Hampshire began to pressure Cooper for third, eventually making the pass less than a lap later. Meanwhile, at the front, Lawrence reeled in Martin and used the same outside line to make the move and take over the lead. Deeper in the field it was a battle between two rookies, with Levi Kitchen (Monster Energy Star Racing Yamaha) putting pressure on Vohland for sixth place. Kitchen managed to get the better of Vohland there, while out front Lawrence had stretched out a three-second lead with seven minutes to go in the race. Hammaker hit the ground hard dropping out of fifth and giving Kitchen the position in just his second Pro Motocross race. As the checkered flag came out it was Jett Lawrence taking the win, with Martin and Hampshire rounding out the top three. Cooper took fourth with Vohland, Forkner, Kitchen, Frye, Swoll and Preston Kilroy (BarX Chaparral Suzuki) rounding out the top 10.