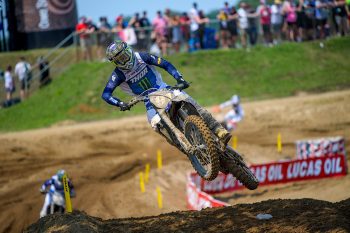 Nate Thrasher will be sidelined for the remainder of the 2021 Pro Motocross championship after season-ending surgery on a torn labrum sustained in his crash at Millville.

In the opening moto of the sixth round of the season at Millville, Thrasher came together with Max Vohland (Red Bull KTM) in a move that sent both riders to the ground.

The rookie immediately began clutching his shoulder, which had ‘popped out’ in the incident ending his day.

Further evaluation eventually revealed a torn labrum for Thrasher, which has since been repaired, effectively ending his season.

“I had surgery today on my shoulder to repair my torn labrum from my crash at Millville,” Thrasher explained. “Everything went smooth and we’re looking to heal up quick with some therapy and be ready next season.

“Some tough luck but also a lot of positives to take away from my rookie year! Thanks to my team Monster Energy Star Racing Yamaha, and everyone else for the constant support through it all!”

Thrasher had a fairly successful rookie season of Supercross, notching two wins before eventually sitting out the Salt Lake City rounds of the series.