Overall winners Sexton and Martin recall seventh round in Washington.

The seventh round of the Lucas Oil Pro Motocross Championship is complete, with Chase Sexton breaking through to take his first 450MX overall victory of the season and Jeremy Martin making it back-to-back 250MX wins. Both winners were made available to the press following the race for this Debrief interview.

Chase, you cited on the podium that starts were a big change. I want to ask you when you are struggling for starts then you finally get a good one, how difficult is it for you to adjust and keep your cool when all of a sudden you have a holeshot? You actually said you’ve never had one in Pro Motocross before…

For me, I finally got a holeshot, and I’ve been saying if I can just get a good start I’ll be fine, and then I finally got one and I told myself if I lose this race it’s not going to look good on me. It was nice to get out front and not have to eat roost at all, especially in the 450 class going up the hill the roost is pretty gnarly. It was awesome to finally get a holeshot and to lead every lap of that race was nice.

Can you talk a little about the pressure and expectations you have as the future of the Team HRC and how that does or doesn’t affect your racing?

I wouldn’t say so, I mean I put a lot of pressure on myself to do good and I hold myself to a high standard. I always tell people that no one can put it in my head more or have any higher expectations than I have for myself, so it doesn’t really bother me, obviously, I’m racing for a corporation it’s not like the GEICO days so yeah there is that. For me, I try and do the best I possibly can and I’m happy when I ride to the best of my ability and obviously, I’m not when I go out there and flounder. It was nice to finally repay the team for a lot of their hard work, we finally figured out something with the bike last week at Millville, it was nice to translate into today and finally get a win and a podium.

There was a bit of chatter around this weekend around the MXoN team. Is it something you’ve been asked about and something you are willing to do if given the chance?

100 per cent – I would love to go. I was a little bit nervous there and knew I was on the list to get picked to go, but there were a few rounds there I was riding around in eighth and it wasn’t looking good for me to get picked. I hope this weekend kinda helped me get put to the top of the list and I would love to go and it would be an honour to represent my country and I really want to go race the MXGP guys as well. To answer your question I’m 100 per cent in if I get picked.

You mentioned changes last week you found, its a new bike in 2021, what did you find?

For me, I’m really sensitive to the balance of the bike, if the rear is high I tend to ride really tight and I don’t necessarily feel comfortable even if the bike is working decent. We actually ended up cutting the sub-frame last weekend 5mm after the first practice and I came back and just wasn’t comfortable at all, so cut the subframe and that’s pretty much it, I think we went a little bit stiffer just to compensate for lowering the rear. The subframe was a pretty big change, but to be honest we didn’t change much with the actual suspension- just more balance. For the starts, we did a map change for this weekend where I couldn’t go over 9000rpm as I tend to get a little too high on the starting line and I can’t hear my bike too well so it hits a little rev limiter and I know to back it down. That I think helped a lot on the starts and for bike change that’s pretty much it for me.

That second moto, you had that awesome battle with Eli [Tomac] and also with Dylan [Ferrandis]. When you went over the finish line and we see your head went down, was that just disappointment you weren’t up there or was that just you had won and you finally got that monkey off your back?

I actually didn’t know. I was kind of doing math in my head. I knew if Eli didn’t get to Dylan, that I thought I won. But I wasn’t 100 percent sure if I won when I crossed the finish line. I was pretty tired. I put in a pretty big effort to get to the back of Dylan, then I just couldn’t get around him. I kind of just lost my speed, and obviously Eli was on a mission. I think he ran the fastest lap of the race by I think over a second or close to a second two laps to go, so he was definitely riding well and I didn’t have anything to keep him behind me. Once he passed me, it kind of took the wind out of my sails and I kind of just cruised. I had a little bit of arm-pump actually, which is weird because I don’t usually get arm-pump, but with how choppy the track was I think that’s kind of why I got it. Those guys were riding really good, I dropped off pretty big. Eli was going really fast, but I think Dylan just kind of maintained. I dropped off pretty heavy… I didn’t know I won the race until I got to the podium.

I don’t want to say that the break came at the wrong time. Four races in a row is not a lot, but it gets a little bit grueling – I think everyone is kind of ready for a little bit of a break. For me, I’m just now starting to get where I feel like I’m back where I belong, but I don’t think the break is going to change anything. I’m going to California this week to do a little bit of testing and fine-tune some stuff that I’m struggling a little bit with. This week I probably won’t do any motos, I’ll probably just work on the bike and get that thing figured out, then I’ll head back to Florida and just keep doing my motos and trying to get better, keep getting that intensity in practice. I was struggling a little bit the beginning of this year with the intensity late in the moto, so I’ve really been trying to focus on that in practice as much as I can because it’s hard to replicate that intensity. Keep trying to do that and keep chasing the clock during practice and come into Unadilla ready to go. I like the rest of the tracks – Unadilla is a really good track for me with the ruts – then Budds Creek. Ironman is a really good track and then we head back to California, so, I’m excited. These last five rounds are going to be fun. Looking forward to having this little break, but also get back to racing. 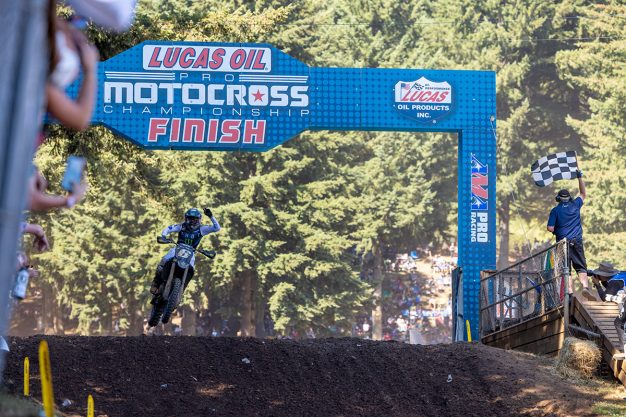 Jeremy, last week on the PulpMX Show you said that you’re expected to win Millville, so it’s kind of one of those things where you’re not taking too much credit for the win almost. This week, getting the win now on a completely different, technical type of track, does it kind of change how you envision the rest of your season going, or how you approach each round from here on out?

That’s a good question. I wouldn’t really say it changes the vision of the rest of the season, but for me, there’s obviously a lot of pressure with the hometown race. I literally grew up there riding. I learned how to ride there. I trained there. Surprisingly, in my entire professional career I’ve never gone 1-1 there, so I kind of had a reality check with myself like, what are you doing? Then to finally do it is pretty dang neat. Washougal, I’ve hit the deck at that place a lot of times since I turned pro in 2013. To finally be able to win—I know I got gifted the overall. Obviously, J-Coop [Justin Cooper] went down in a crazy fast section. He was probably going 30 or 40 miles an hour up Horsepower Hill there. To do it, it’s pretty sweet. As you guys could see, I was pretty cranked up on the podium.

Is it in your head at all that things go a certain way, there’s championship hopes? Do you even think about that? I know it’s a stretch, but is it something you consider when you line up?

No. I honestly don’t consider it at all. I’m 60-something points down, guys… That’s pretty big. I know Trey [Canard] did the run on [Christophe] Pourcel, what year was that, that Trey did that?

That was a crazy deal, or whatever. When I line-up, I just think about wanting to win on my dirt bike and have fun and live in the moment. When you’re on the line and you’ve got the butterflies in your stomach and all that stuff and you’re like, ‘man, can I get this done?’ So, that’s mainly just what I’m thinking about.

You’re the first two-time winner this year and you’ve got the most moto wins in the class. If you don’t win the title and have the most wins and overall wins, does that mean anything to you?

Obviously, winning championships is something that when we sign with a manufacturer, that’s the goal. I’ve been fortunate enough to win two of them in my career so far – I’d be lying if I said I didn’t want to win it. I’ve been through the wringer this year and then the last couple years with just injuries and stuff, so for me if I could win it, great, but I’m out here fighting. I got hurt and then I was able to turn the ship around pretty quick and get back up to that level of speed. Sometimes it doesn’t line up. If I can get some more overalls and some more wins, to me that’s a heck of a deal just for myself, to face the adversity and everything and just kind of keep plugging away.

How is the injury going at the moment? You indicated a couple weeks ago you didn’t really like doing the big jumps, the singles, but today landing in the sand pretty much to flat, that’s got to hurt the hand, surely.

For sure. I rode Tuesday last week. I finally did a full program for the first time. I did my warm-up and then I got 25 minutes into the first moto and I was like, the scaphoid is definitely bothering me. The hand was bothering me, so I guess the adrenaline of race day and then also, I try not to take any Advil or whatever during the week to kind of make it more potent on race day to kind of help me get through. I guess that’s just kind of like something I’ve been dealing with a little bit.