Key points to be aware of at the halfway point of the 2021 outdoor season.

Six rounds into the 2021 Lucas Oil Pro Motocross Championship and things are heating up, with momentum shifting and some new contenders emerging creating all sorts of focal points of interest. MotoOnline looks at the Top 10 topics to follow. 1. Ferrandis finds 450MX rookie success:
The Monster Energy Star Racing Yamaha rider has been nothing short of impressive in his first Pro Motocross season on the YZ450F, scoring an overall podium at each round to give him a 32-point championship lead. If the Frenchman can keep this consistency for the rest of the series it’s going to be very difficult for anyone to claw back his advantage.

2.Resurgent Roczen hanging on:
In his return to motocross, Ken Roczen has put a solid 2021 season together so far, remaining within striking distance of points-leader Ferrandis. The German, who downplayed his outdoor chances, has taken more moto victories than any of his rivals in this year’s championship, however, a DNF in the first moto at Spring Creek might prove costly to his title aspirations. The Team Honda HRC rider did bounce back to take a much-needed victory in the second moto at round six and will need to carry that winning form into the second half of the championship if he wishes to reclaim the red plate.

3. Cooper and Jett Lawrence control 250MX:
Jett Lawrence came out of the gate guns blazing at round one, charging to an overall victory at Fox Raceway. He then backed up that form with a moto victory at Thunder Valley en route to an overall podium and another victory in the first moto at RedBud. However, since then the Team Honda HRC rider has experienced a dip in form, with poor starts and mistakes proving costly in his bid to retain the red plate, which he lost to Justin Cooper at Spring Creek. Cooper has been a model of consistency in 2021, only finishing one race outside the top five and scoring eight moto podiums giving him a slender lead of six points over the Australian teenager.

4. Figuring out Tomac:
Eli Tomac’s Pro Motocross campaign got off to a mediocre start, with his best moto finish in the opening five races being a sixth. That all changed in moto two at High Point where the Monster Energy Kawasaki rider took a victory. He then went on to win the second moto at the next two rounds, but leaves us to question what happened in the first motos at RedBud and Southwick in finishing fourth and eighth respectively. Tomac’s inconsistency has all but ruled him out of taking a fourth 450MX crown barring a major mistake from Ferrandis, however, if he can iron out his consistency a late-season charge for the runner-up championship position at least is not out of question.

5. Jeremy Martin threat:
After being forced to the sidelines after a crash in moto two at Thunder Valley flared up an existing scaphoid injury, Martin made his presence felt in the 250MX class at Spring Creek. The home rider made a statement taking both moto victories on his way to first overall. While the Monster Energy Star Racing Yamaha rider’s absence from High Point has effectively ruled him out of title contention, seeing his return to form could certainly shake things up amongst the 250MX title combatants. 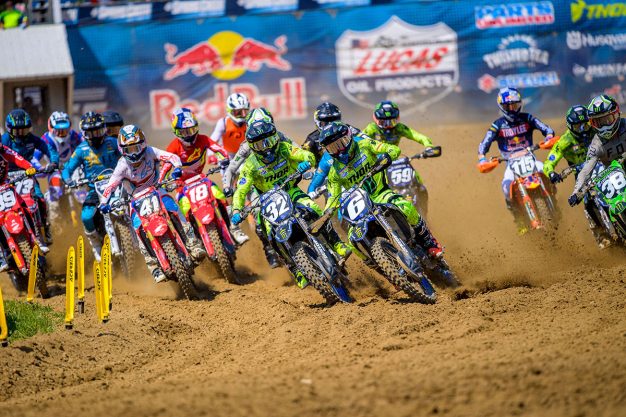 6. End near for AC?:
A crash in the opening moto at Spring Creek saw Adam Cianciarulo DNF, pulling out of the race as he continues to struggle experiencing an ongoing nerve problem in his arm that was also reported on after Southwick. The question on many minds now is whether this problem will mark the end of the Monster Energy Kawasaki rider’s season or if we will see him continue on until the end as intended.

7. Sexton making gains:
In his second season in the 450MX championship, Chase Sexton was tipped to be a title contender. A second in the opening moto at Fox Raceway put some backbone to this expectation, however, while the Team Honda HRC rider has notched up multiple top-five moto finishes and he still needs to find that step to make him a true threat. A third in the second moto at Spring Creek was evidence of Sexton making gains, as he will aim to be on the rostrum more frequently in the remaining six rounds.

8. Curious case of the KTMs:
Off the back of winning the Supercross championship, it has come as a surprise to many that Cooper Webb currently sits outside of the top five in the 450MX standings. The Red Bull KTM rider has yet to find himself on the podium and will be looking to finish the remaining rounds strong to give the Austrian manufacturer something to take away from the 2021 season. Teammate Marvin Musquin has experienced an even more difficult outdoors campaign, having not finished a single moto inside the top five, which brings into question what exactly has gone wrong for the KTM pairing outdoors.

9. Return of the traditional tracks:
A condensed 2020 Lucas Oil Pro Motocross Championship as a result of the Coronavirus pandemic saw many of the regular tracks such as Washougal, Unadilla, Budds Creek and Hangtown scrapped from the schedule. However, these tracks have all returned in the 2021 season and with rounds already completed at Southwick and High Point, fans and riders alike eagerly anticipate the coming return to these traditional venues.

10. Team USA contenders rise:
With the Monster Energy Motocross of Nations (MXoN) scheduled for 26 September in Italy, speculation increases as to who will be representing Team USA at this year’s event. An obvious choice for the MX2 category would appear to be Justin Cooper, however, with his Star Racing team relocating to Florida, this could result in Cooper, Aaron Plessinger or any of the team’s riders being unavailable (RJ Hampshire for MX2 and Chase Sexton on a 450, anyone?). With an overall victory at round six, Justin Barcia delivered GASGAS with their first 450MX victory – a performance that will likely put him in contention for a place on the team. It can be expected all will be revealed in the near future.