Possible MXoN appearance not being ruled out completely just yet. 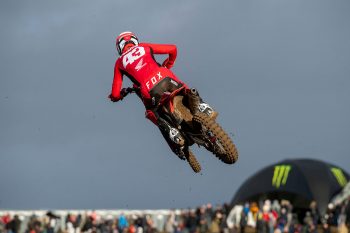 Team Honda HRC’s Mitch Evans has begun the recovery process after a successful third operation on his left wrist, not completely ruling out a possible late inclusion in the Motocross of Nations (MXoN).

Evans opted to fly home to take the surgery in Australia, having a ‘radioscapholunate fusion’ in Brisbane after previous procedures had left him with limited mobility.

The 22-year-old has now successfully been operated on by Dr. Steven Andrews, indicating that the operation went as planned as he now looks forward to his return to the MXGP World Championship. It’s anticipated that he could be back on the bike in five weeks time.

“I’m happy to finally be on the mend,” Evans stated. “The surgery went really well and the doctor said there were no complications. Basically, it all went as expected, so I was happy to hear that.

“Pain-wise I’m good, I started my first physio session today and that well so it is good to be on the right track to getting back on the bike pain-free. Seeing [Tim Gajser] winning races gives me the motivation to really put in the work, because I know the bike it is capable, it is just down to me.”

The initial injury to Evans’ wrist occurred at last year’s MXGP of Spain, which brought an end to his 2020 campaign. Complications from the injury forced the CRF450R rider to miss the first four GPs, with a return date not yet confirmed.

While Team Australia will likely be selected in the coming weeks without Evans as part of the squad for Mantova on 26 September, pending his recovery he would still consider being a replacement at the 11th-hour if such a situation arises.

It’s thought that Evans will be fit to return to racing around that time, however, at this point the North Queenslander is reluctant to make any firm commitments in representing his country while beginning his initial rehabilitation and working his way back up to speed.

Favourites for Australia at this point are US-based brothers Hunter and Jett Lawrence, as well as MX2 World Championship regular Jed Beaton, however who would ride what category is seemingly adding complications since all three currently ride 250s full-time.