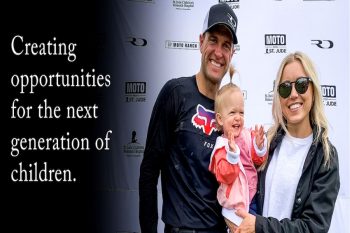 Ryan Dungey, one of the most decorated competitors in the history of off-road motorcycle racing, has taken a milestone step in his philanthropy with the introduction of the Ryan Dungey Foundation, benefiting St. Jude Children’s Research Hospital® and All Kids Bike. The establishment of a non-profit organization in his own name is a natural evolution of the Minnesota native’s continued commitment to charitable endeavors and represents a growth in his aspirations to develop more impactful opportunities that can do more for the communities that mean so much to him.

For more than a decade Dungey has used his position as a world-class athlete to better the lives of others, serving as an ambassador for major non-profit cancer research organizations like Livestrong and St. Jude. The latter’s partnership with Dungey dates back to 2012, with the creation of an annual charity bike ride and run in his home state that raised more than $1.2 million toward the ongoing fight against childhood cancer.

“The opportunity to pay it forward has been a personal passion of mine since before I even turned professional,” explained Dungey. “I lost my grandmother to cancer in 2005, just as my racing career began to take shape, and her memory has been a driving force for my success on the racetrack and my commitment to philanthropy off of it. From the moment I signed my first contract I had an end goal to establish my own foundation, and I’m so proud that day has finally arrived. I’m grateful to have such an incredible relationship with St. Jude Children’s Research Hospital. We’ve accomplished a lot, but I want to do more, and with the Ryan Dungey Foundation we can do just that.”

Through his foundation, Dungey will continue his long-standing support of St. Jude by making the globally renowned hospital one of the beneficiaries. The next chapter of this partnership will provide more opportunities to raise awareness for continued cancer research and fundraise for the organization, with the foundation serving as a conduit for race fans and entities within the motocross industry to offer contributions.

Dungey’s success throughout his racing career is a direct result of the tremendous support he received within the motocross industry. From the teams he competed for and the manufacturers he represented, to his personal endorsement partners, loyal fanbase, and memorable friendships collected along the way, the two-wheel community embraced a virtual unknown from the outskirts of Minneapolis for who he was – humble with a strong work ethic. He rewarded them all with a hall of fame caliber career that saw Dungey capture a total of nine championships in the supercross and motocross disciplines, as well as victories representing Team USA at the Motocross of Nations. With that support, he also became the proverbial face of the sport with a pair of ESPN ESPY Awards and his own Wheaties box.

“I always wanted to be a leader within the motocross community, but that never would have been possible had I not been given a chance to show what I’m capable of,” added Dungey. “I’m blessed to have enjoyed such a wonderful career and racing certainly gave me the life I have today, but now it’s my turn to give back through the Ryan Dungey Foundation. Two wheels provided the gateway to pursue my dreams and I want to share the joy it brought me with as many kids as possible, because I know it can change someone’s life.”

With the inclusion of All Kids Bike as the foundation’s other beneficiary, Dungey hopes to cultivate the next generation’s ability to discover their own passions through the sense of freedom and endless possibilities that comes from riding, while also fostering a healthy and active lifestyle. Being on two wheels effectively changed Dungey’s life and through its initiative to place Learn-to-Ride programs into public schools across the country at no cost, All Kids Bike personifies the concept of developing childhood mobility, both physically and mentally.

To kickstart its charitable initiatives, the Ryan Dungey Foundation will coordinate an exclusive ride day alongside the former racer at Southern California’s Fox Raceway this fall. The event will be organized in conjunction with a collection of founding partners equally committed to Dungey’s passion to give back to those in need – Fox Racing, KTM North America, Inc., Kutzler Express, Inc., Next Level Sports, and Strider Sports International, Inc.

“Our partnership with the Ryan Dungey Foundation aligns incredibly well with our commitment to growing the sport of Motorcycling,” said John Hinz, Chief Executive Officer of KTM Group North America, Inc. “Our initiatives through co-branded STACYC’s, KTM’s electric mini’s and mini cycle range, KTM Jr. Supercross, and our engagement in amateur racing are just a few of the ways we are actively fostering the future of the sport. We love to see the youth segment thriving and enjoying outdoor activities such as motorcycling and bicycling, and we are excited to see the foundation create space for new and existing riders to take their first steps while also giving back to St. Jude Children’s Research Hospital and All Kids Bike in support of the amazing things they’re doing for children in need.”

Additional details surrounding the Ryan Dungey Foundation Ride Day will be announced in the near future, including ways in which the public can get involved.

“We are very excited to join forces with the Ryan Dungey Foundation as a founding partner,” said Austin Hoover, Global Director, Sports Marketing & Athlete Development, Fox Racing. “Having worked with Ryan as an athlete beginning in 2009 and experiencing so much success together on the racetrack, we are really looking forward to continuing our relationship beyond his racing career through the support of such an amazing foundation.”