The fifth round of the 2021 Lucas Oil Pro Motocross season is done and dusted, with Dylan Ferrandis taking his third consecutive 450 overall. The Monster Energy Star Racing Yamaha rider was made available to the press following the race for this Debrief interview. 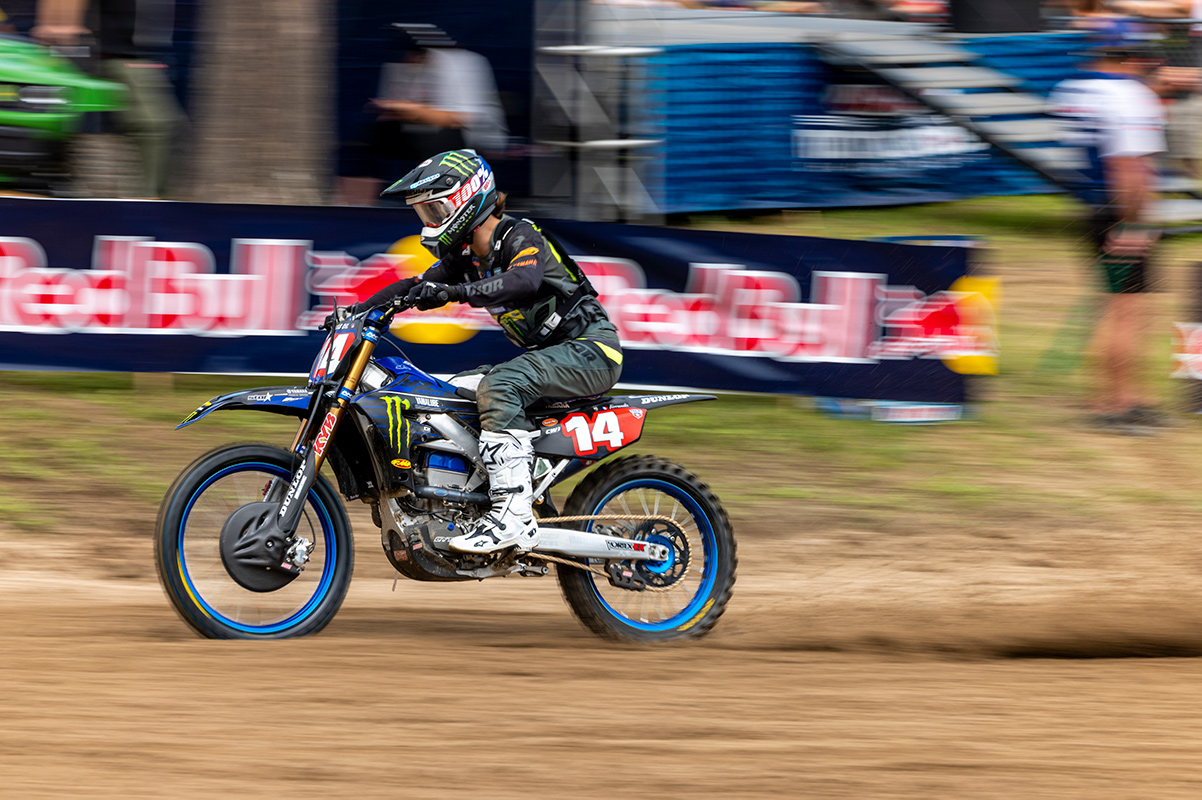 That second moto there, you had the steam coming out of the bike and the team alerted you to it. After the moto you seemed frustrated, was that because you felt like you could go with Tomac in the final moto, or was it that just couldn’t push at all toward the end?

I don’t think I could match Eli’s speed in moto two, he was on fire and riding really well. But I feel like yeah I could have come back on Ken [Roczen] and tried to challenge him in the last lap. So yeah for sure was frustrated about that, but also frustrated a little bit because I had a small crash. So yeah, without the small crash maybe I could have passed Ken. The team asked me like four laps before the end to slow down and to just secure P3, and I was not really listening I wanted to go back to the front and try to pass Ken. Yeah at the end they were pushing for me to slow down [so much] that I had no choice but to listen and to do it. For sure it was safer for the bike but we kind of don’t know really what we can do with the 450 and how far we can go in that condition. So yeah, I was for sure frustrated because of me and because [I didn’t leave] everything out on the track. You know in the past few races I gave everything I had and in this race, I had a pretty easy first moto and second moto I just couldn’t push to the end. It happens, the good thing is I got the overall and that’s the most important.

You mentioned after your first win that you’re hard on the team and you’re really thankful that they’ve been sticking behind you and putting in long days to get where you want to be. How does it feel to be able to repay them with good results and even though you’re hard on them do you feel it’s paying off?

For sure, I am working really hard but I’m not the only one the team is working every day, every weekend, on days off, they never count the hours they do and yeah, at some point I’m there because of them. They do the testing and everything, they do the bike, so I’m not the only one. I know in the Supercross season we struggled so much trying to have the Yamaha 450 ready to win and it was really hard. We had a lot of disappointing races and stuff and we struggled hard at some point to get the bike dialed for racing. To finally have the bike we worked so much for is really good for everybody. I think this team has worked so hard the last few years but they didn’t get the results they expect. So getting them the result today is awesome and I’m proud to be part of this group of people that work really hard, and as hard as me. At the end everybody is happy and everyone gets the reward.

Obviously, you’ll want to win a Supercross championship in the future, do you feel you sacrificed a bit in Supercross this season to put yourself in a better position for outdoors and now maybe you’ll be able to compete come next year?

For sure the goal is to win every championship when I go to the line. Like I said this year, we weren’t ready to win races in Supercross. We learned a lot, me as a rookie and also the team as a rookie [year]. We are all surprised, but at the same time we all worked so hard for this motocross championship so I think we deserve the position we are at now. We can see that RedBud we had three bikes in the top five so it’s not only me, it’s the whole team that have worked together to put the Yamaha bike on top. And yeah, for sure as soon as the motocross season will be over the goal is to be ready for Supercross and win in Supercross. We all want that and that’s as important as motocross for sure.

You may or may not answer this question, but did you and the team come to any conclusion as to what was happening with the bike as it smoked in the second moto?

Not really, I still don’t know. I asked the team to tell me because it’s going to be really important to know for the future. No, I think really, like I said Eli [Tomac] was really on fire this moto and I tried to stay in front of him for the first part of the moto. I was pushing the bike too much, not being too smooth and using too much clutch, and revving the bike, so the bike just got too much heat. After that I don’t know, we still don’t know right now but for sure we’ll know in the next few days and it’s important for us to know in the future so if it happens again to know how long we can go with the bike that smokes.