Direct updates from round five of the season in Massachusetts.

Follow the fifth round of the 2021 Lucas Oil Pro Motocross Championship with direct updates from Southwick in Massachusetts via Racefeed. 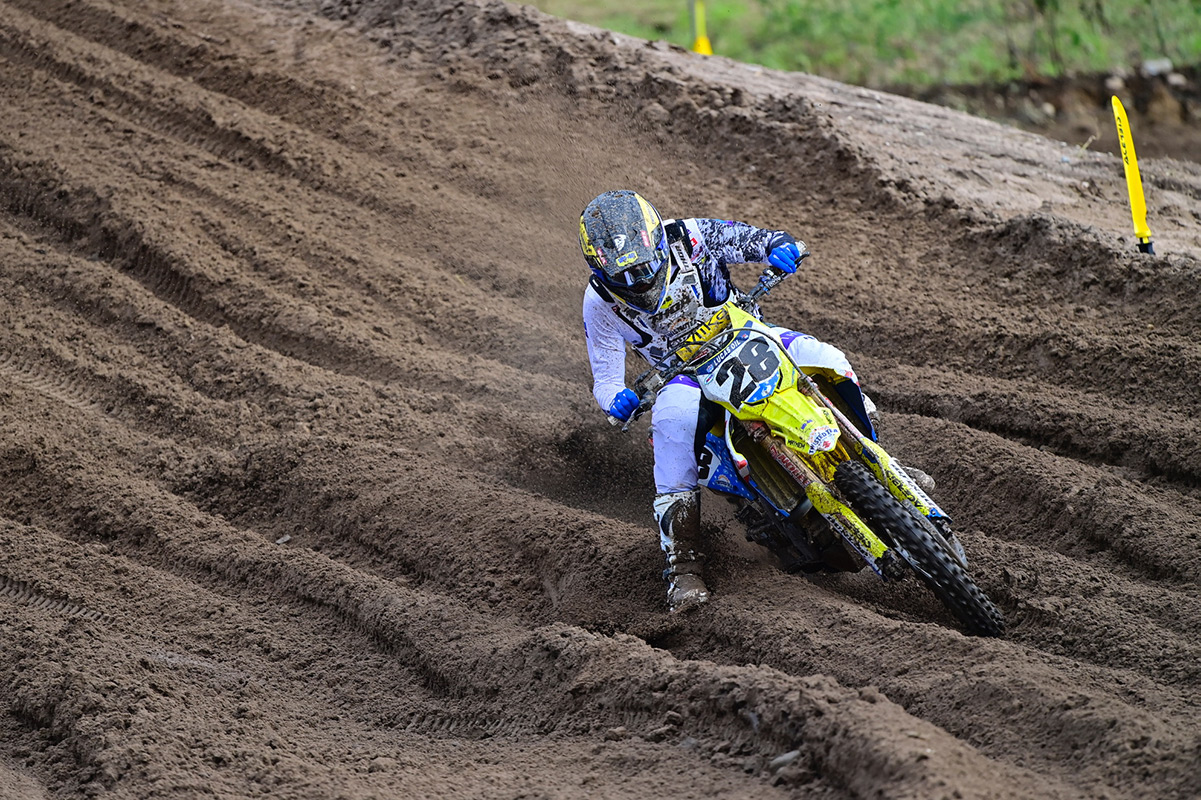 250 Qualifying:
It was a Rockstar Energy Husqvarna sweep of the first two positions with RJ Hampshire leading the way with a 2:15.914s lap over Stilez Robertson who clocked a 2:15.964s lap for second place. Hunter Lawrence (Team Honda HRC) was third well over second back with a 2:17.108s lap. Jalek Swoll was running third behind his teammates before eventually ending up in fourth. Rounding out the top five was Justin Cooper (Monster Energy Star Racing Yamaha) ahead of Michael Mosiman (TLD Red Bull GasGas) in sixth who was the first rider in the 2m18s range. Cooper’s teammate Jeremy Martin was seventh with points leader Jett Lawrence in eighth place. Rounding out the top 10 was Nate Thrasher (Monster Energy Star Racing Yamaha) in ninth and Max Vohland in 10th.

450 qualifying:
Adam Cianciarulo topped the 450 timesheets with a 2:12.659s lap ahead of Team Honda HRC’s Ken Roczenjust under half a second back. Roczen’s teammate Chase Sexton was third. Points leader Ferrandis was fourth and the first rider in the 2m14 second range. Despite a heavy slam at the end of the second session, Christian Craig (Monster Energy Star Racing Yamaha) finished fifth overall. Cooper Webb (Red Bull KTM) was sixth ahead of Joey Savatgy, the Rocky Mountain ATV/MC KTM rider was the first rider in the 2m15s range for seventh overall. Justin Barcia was eighth as Aaron Plessinger (Monster Energy Star Racing Yamaha) and Red Bull KTM’s Marvin Musquin rounded out the top 10 in the 2m17s range.

250 moto one:
The first holeshot of the day went to Swoll ahead of Hampshire, Martin, Shimoda, and Mosiman. Martin tipped over halfway through lap one as Mosiman made his way through on Shimoda for third. Hunter Lawrence worked his way into the top five pressuring Shimoda in lap two, as Hampshire closed in on Swoll for the lead. Deeper in the field, Jett Lawrence was in 10th, while Cooper was buried 21st. The top 10 as things settled out early on it was Swoll, Hampshire, Mosiman, Shimoda, Hunter Lawrence, Thrasher, Colt Nichols (Monster Energy Star Racing Yamaha), Garrett Marchbanks (ClubMX Yamaha), Vohland, and Jett Lawrence. The lead trio started to battle after five minutes, with Hampshire assuming the lead and Mosiman pressuring Swoll immediately for second. Mosiman made the move and Hunter Lawrence quickly made his way through as well. Hampshire hit the deck with 20 minutes to go, dropping him to third and into the clutches of Swoll and Shimoda. Shimoda picked off Swoll, as Nichols closed in on the trio. As the clock ticked down to 15 minutes left, Mosiman was 2.5s ahead, with Lawrence and Hampshire closing in quickly. Deeper in the field Jett Lawrence had recovered to seventh, as Cooper charged through to 12th. Hunter Lawrence pressured Mosiman for the lead as Hampshire began to pressure as well, the trio taking lines from each other for multiple laps. Mosiman hit the ground dropping to seventh as Lawrence charged for the lead stretching a two-second lead on Hampshire with five minutes to go. With five minutes to go, Jett Lawrence caught the back of Swoll who got sideways in front of him and hit the ground hard, crashing again less than half a lap later, dropping down the order to ninth. In the end, it was Hunter Lawrence with his first moto win of the season Hampshire, Shimoda, Nichols, Swoll, Cooper, Mosiman, Robertson, Jett Lawrence, and Vohland rounding out the top 10.

450 moto one:
Ferrandis grabbed the lead ahead of Plessinger, Barcia Cianciarulo, Musquin, Sexton, and Roczen. Barcia made a move around Plessinger early as Musquin charged to fourth. After one lap it was Ferrandis, Barcia, Plessinger, Musquin, Cianciarulo, Roczen, Sexton, Webb, Wilson, and Savatgy in the top 10. Ferrandis darted out to a big lead, as Musquin dropped back to the seven spot, allowing Cianciarulo and Roczen to occupy the final two spots in the top five with Webb just behind. Tomac was recovering from a rough start and had made his way to ninth by the halfway point of the moto. As Ferrandis stretched out an eight-second lead with six minutes to go, Roczen began to close on Cianciarulo for fourth. A few laps later, Roczen made an aggressive move on Cianciarulo for fourth, with just three laps to go. In the end it was Ferrandis with the win by nearly seven seconds, ahead of Barcia, Plessinger, Roczen, and Cianciarulo in the top five. Webb ended up sixth, with Sexton, Tomac, Craig, and Musquin taking the final spots inside the top 10.

250 moto two:
Hampshire got another great start with the holeshot ahead of Martin, Cooper, Swoll, and Hunter Lawrence. Shimoda made his way through on Lawrence while Hampshire snuck out to a big lead. Martin and Swoll hit the ground hard dropping them outside of the top 10. After the opening lap, it was Hampshire, Cooper, Shimoda, Hunter Lawrence, Nichols, Vohland, Jett Lawrence, Mosiman, Forkner, and Brown in the top 10. Lawrence sent it big around the outside of Nichols for fifth with 25 minutes left in the moto, setting out after his brother just ahead of him. At the 20 minute mark, Hampshire crashed again, giving the lead to Cooper with Shimoda behind and dropping him into the battle for third with the Lawrence brothers. With 15 minutes to go, Hunter Lawrence made his way past Shimoda for second. At the 12 minute mark, Hampshire hit the ground again, dropping back seventh and moving Jett Lawrence into fourth, just behind Shimoda. Two laps later, Hunter Lawrence caught Cooper for the lead, taking the lead after chasing him down over three seconds ahead. At that point, Jett Lawrence had passed Shimoda and began to charge toward the front, catching Cooper with three minutes to go, the duo catching back up to Hunter in the lead. Hunter responded and stretched out a three-second lead ahead of the last lap. In the end, he did the double, winning by 4.5s over Cooper, with Jett a further 2s back. Fourth was Shimoda with Nichols rounding out the top five. Hampshire ended up sixth ahead of Mosiman, Robertson, Marchbanks, and Brown rounding out the top 10.

450 moto two:
Webb grabbed the holeshot but Roczen assumed the lead, with Webb, Plessinger, Musquin, Craig and Cianciarulo just behind. Bike problems for Plessinger put him out in the second corner, as Roczen checked out by nearly four seconds in the opening lap. Ferrandis got a rough start but recovered to sixth in the opening lap, in a heated battle with Tomac, Sexton, Barcia, and Savatgy for the position. Ferrandis and Tomac made their way past Musquin, picking up their pace and catching Cianciarulo and Webb in front of them. Webb got shuffled back to fifth, as Ferrandis nearly crashed allowing Tomac by as his bike began to blow steam. Tomac then passed Cianciarulo, with Ferrandis following suit shortly after to take third. Tomac charged hard, lapping four seconds faster than Roczen, catching and passing him with 10 minutes to go. Tomac lapped around four seconds faster than everyone on the track and jumped out to a huge lead quickly. Cianciarulo slipped down the order with five minutes to go, dropping to fifth behind Webb and Barcia. Barcia then made his way around Webb into fourth with two laps to go. Tomac eventually grabbed the win ahead of Roczen, Ferrandis, Barcia, and Webb in the top five. Sixth was Cianciarulo from Musquin, Sexton, Wilson, and Savatgy.