Breaking down areas of interest three rounds into the world championship.

Even though we’re just three rounds into the 2021 MXGP World Championship, things are escalating rapidly with all kinds of unpredicted scenarios playing out on track. MotoOnline looks at the Top 10 topics of interest. 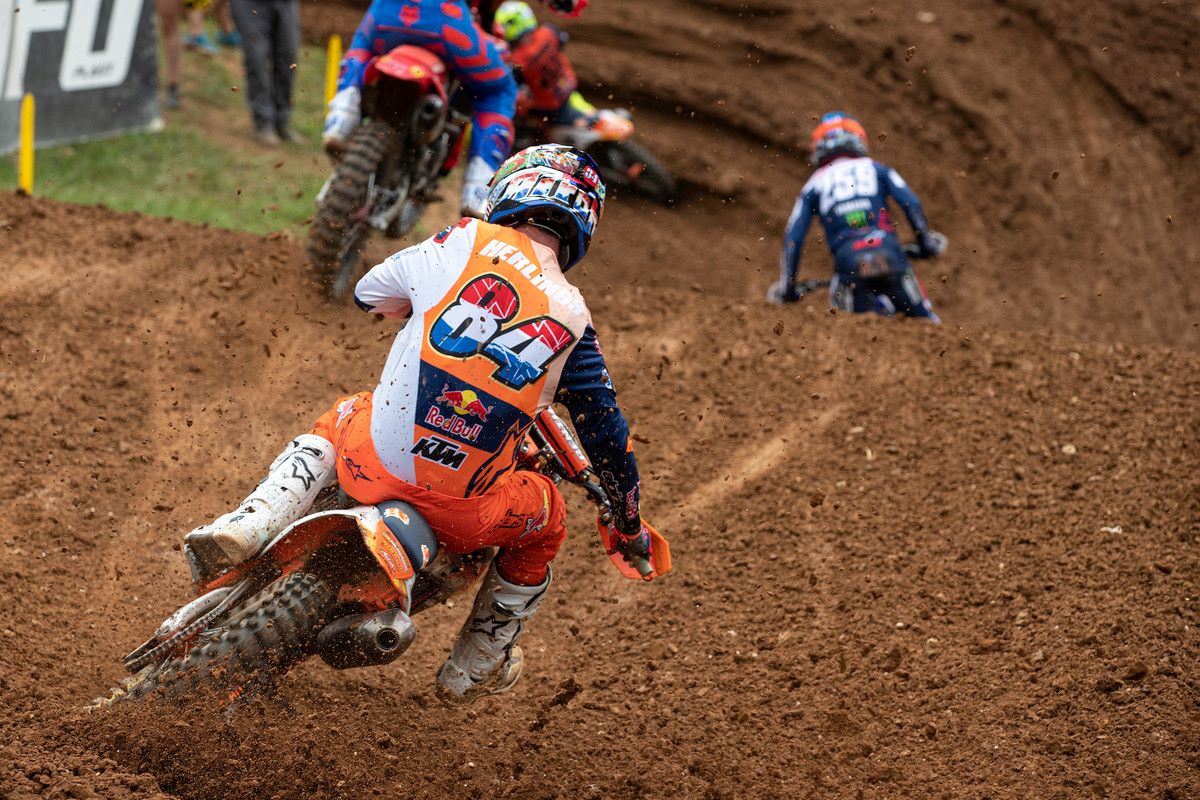 1. Cairoli achieves legend status:
Nine-time world Champion Antonio Cairoli has won at least one grand prix every year for 18 years. The 35-year-old Red Bull KTM legend picked up his 93rd trophy for his bulging cabinet by going 1-3 for the overall victory at Matterley Basin. In the opening race, he was at his brilliant best, taking control early on and smashing out perfect laps on his way to an eight-second victory over team-mate Jorge Prado. The second moto saw him start third, but was shuffled back to fifth early on. Cairoli regrouped and clawed his way back into the top three, then threw the hooks into defending champion Tim Gajser, matching his pace for the rest of the race. Cairoli backed up his inspired performance with a third overall at Maggiora, minimizing the damage of a DNF at the opening round in Russia. He’s now fourth in the championship, just two points behind Romain Febvre.

2. Gajser starts title defense strongly:
Even with a tough outing at Maggiora, Team HRC’s three-time MXGP champion Tim Gajser will be reasonably happy with how his title defense is going. The Slovenian was near flawless at the opening round at Russia where he opened his 2021 account with a 17-second win over Romain Febvre. A second-moto win at Matterley Basin saw him extend his margin over Herlings to 15 markers. Maggiora saw Gajser’s championship lead sliced to just six points after he struggled to make passes in the opening race (finishing fifth), then battled through the wet conditions from 11th to sixth in the second moto. With the fourth round at Oss being a home GP for Herlings, a return to the form he found at Russia will be key for Gajser’s success.

3. MX2 mayhem:
No one could’ve predicted the upheaval we’re witnessing in the MX2 class this year. Three championship lead-changes over three rounds, the defending champ outside the top 10, four different winners from six motos and a rookie holding a slender two-point lead. With the injured Tom Vialle in damage control and the widely-touted heir to the throne, Jago Geerts, battling inconsistency and knee issues, the 2021 MX2 championship has become a veritable free-for-all. Spaniard Ruben Fernandez (Team Honda 114 Motorsports) overtook Vialle’s championship lead at Matterley Basin, before Red Bull KTM’s Italian rookie Mattia Guadagnini jumped into the lead after a shock round win at his home GP at Maggiora. However, just eight points separate the top five, with Frenchman Maxime Renaux (Monster Energy Yamaha) breathing down the young KTM racer’s neck. Round four at Oss next weekend is shaping up to be a must-win for at least eight of the top 10 riders.

4. The Bullet is back:
After two seasons riddled with injury – including a broken neck last year – it’s a pretty major feat that Red Bull KTM’s Jeffrey Herlings is as fast as he is. He’s finished on the podium at all three rounds so far, but it was at Maggiora that it seemed like the switch suddenly flicked and we saw the raw speed he’s capable of producing. In the opening moto he had to pull off the track to remove a stone that got jammed in his rear brake but still fought his way back to sixth position. As the rain came down during the second race, Herlings stalked fellow Dutchman Glenn Coldenhoff for half the race before making a crucial round-winning pass and stretching out a seven-second lead by the time the chequered flag fell. With a taste of victory and three of the next four tracks (Oss, Lommel, and Kegums) suited to him, there are good odds that Herlings will take over the championship lead within the next month.

5. Three-way tie at Maggiora:
While it’s not uncommon to have races won on countback between two racers, it’s a pretty rare sight to have a three-way points tie after a full day of racing, especially when the world’s best racers are involved. The MXGP racing at Maggiora was that good, though, that three of the main championship contenders, Jeffrey Herlings, Glenn Coldenhoff, and Tony Cairoli, all finished on 40 points. After one dry and one wet race around the spectacular hillside circuit, Herlings finished the day with 6-1 results, Coldenhoff 4-2 and Cairoli 3-3. Romain Febvre won the opening race, but had a shocker in the mud, finishing a disappointing 12th. 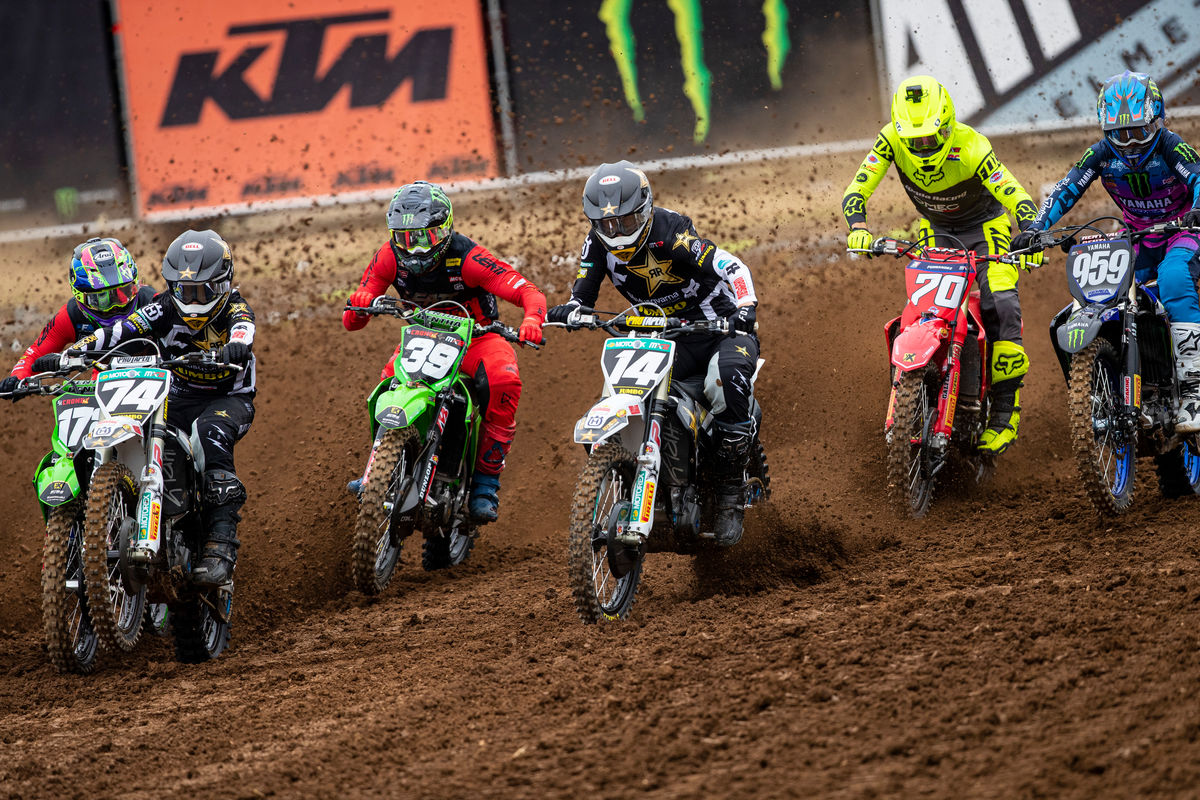 6. Vialle’s title defense on the ropes:
Defending MX2 champion Tom Vialle has suddenly found his 2021 championship campaign is in a deep hole that’s going to take some effort to emerge from. After taking the opening round at Orlyonok, Russia by storm with a flawless double-moto victory, the young Red Bull KTM rider fractured his hand in a practice crash in the days leading up to the second round at Matterley Basin. Vialle missed that round entirely, then tried to return for the third stop at Maggiora, but the pain was too much; he pulled out just a handful of laps into the opening race. With a welcome two-week break between rounds three and four, he’ll be hoping to rebound next weekend. If not, his hopes of back-to-back titles will be obliterated.

7. Henry Jacobi’s huge crash:
JM Racing Honda rider Henry Jacobi went viral for all the wrong reasons at the second round of the MXGP at Matterley Basin when he ejected spectacularly off his bike on the first lap of the opening MXGP race. The 24-year-old lost his footing on the pegs on the face of a tabletop, whiskey-throttling and catapulting sideways off the bike, very nearly taking out Ivo Monticelli (Kawasaki Racing Team) mid-air in the process. Jacobi landed heavily and hurt his back, but miraculously still lined up for the second moto and ground out a mettle-testing 14th.

8. Beaton frustrated by crashes:
Australia’s primary MX2 title contender, Jed Beaton, has endured a frustrating start to the year, with crashes and bad starts hampering his results so far. A seventh overall at Russia – despite a crash in the second race – was followed by a big stack at Matterley Basin that bent up his Rockstar Energy Husqvarna and forced him to DNF the opening race. Things turned more in Beaton’s favor at Maggiora where he finished 5-7 for seventh overall, moving him up to 10th in the standings. Beaton’s speed is obviously there and he can run with the best of them, but he needs to minimize the mistakes if he wants to make a serious run at a hotly-contested title.

9. Todd cracks the top 10:
Australia’s Wilson Todd had a stormer day at the second MXGP round at Matterley Basin, with a career-best eighth overall in the MX2 class. It was a breakthrough ride for the Bike It MTX Kawasaki rider, who continues to recover from arm-pump surgery, with a consistent 10-11 score-card seeing him finish the day with a solid points haul. It hasn’t been all smooth sailing for Todd, though – at the Russia GP opener, he finished 14th overall in his second ride back after surgery. At Maggiora he finished 16-18 as he nursed an overheating bike to the finish in the opening race and getting caught in a first-turn crash in the second moto. Still, the signs are promising and he’ll look to build as each round passes.

10. Calendar remains fluid:
Just days after the opening round of the championship had been held at Orlyonok, MXGP promoters Infront Moto Racing announced a host of changes to the 2021 calendar. Headlining the announcement was the ‘unavoidable’ cancellation of the popular MXGP of Sweden at Uddevalla, moving the Latvian GP at Kegums from mid-July to 7-8 August, and the introduction of a new French GP at Lacapelle-Marival on 9-10 October. While the circuit has never hosted an MXGP, MX3 visited the venue in 2009 and 2011, and it hosts the annual pre-season International ‘Masters of Motocross’ race. With the whole Covid situation still not under control across the world, it’s probably only a matter of time before we see more revisions to the calendar.