Direct updates from round four of the season in Buchanan, Michigan.

Follow the fourth round of the 2021 Lucas Oil Pro Motocross Championship with direct updates from RedBud in Buchanan, Michigan via Racefeed. 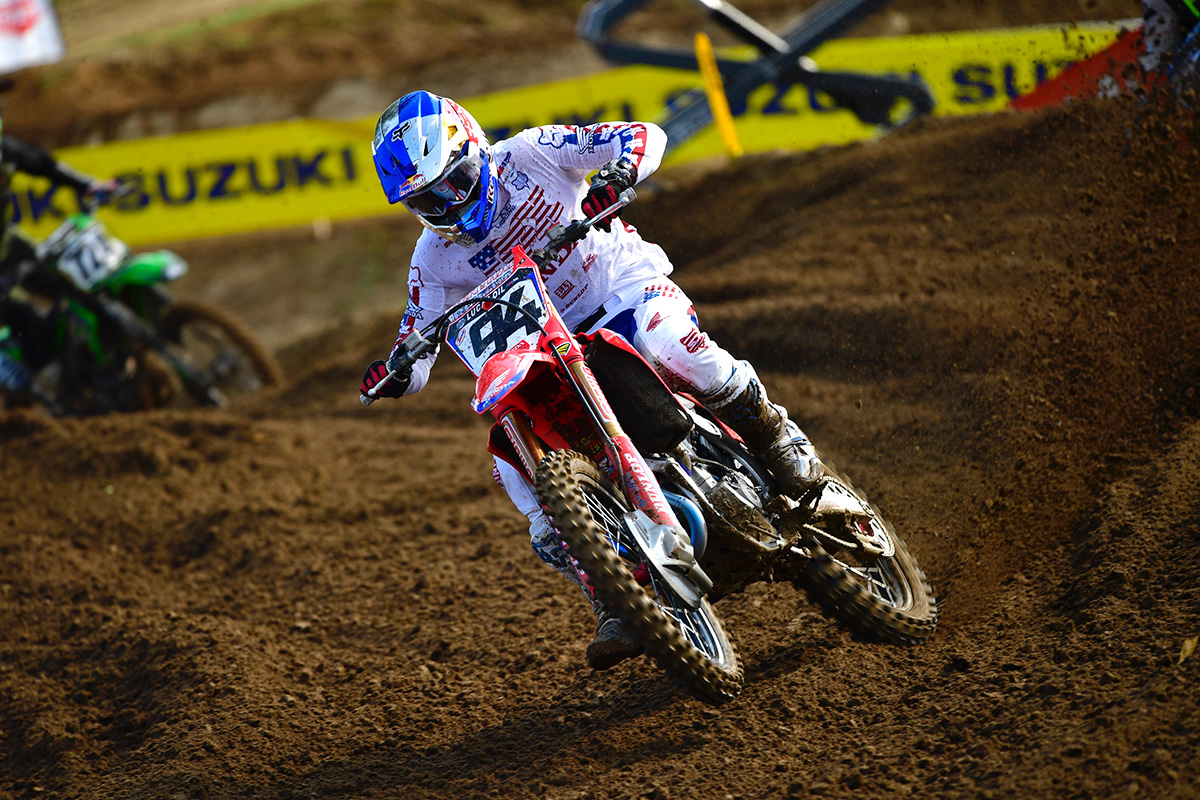 250 qualifying:
Monster Energy Star Racing Yamaha rider Justin Cooper put himself atop the timesheets yet again in qualifying, with his 2:06.179s lap setting the bar in the class. Cooper was followed by Jo Shimoda (Monster Energy Pro Circuit Kawasaki) who was just under a half-second back, with points leader Jett Lawrence (Team Honda HRC) a tenth further back rounding out the top three. Fourth place was RJ Hampshire (Rockstar Energy Husqvarna) as the first rider in the 2m07s range, with Brandon Scharer (ClubMX Yamaha) rounding out the top five. Sixth was Hunter Lawrence (Team Honda HRC), ahead of Colt Nichols (Monster Energy Star Racing Yamaha) as the first rider in the 2m08s range. Michael Mosiman (TLD Red Bull GasGas) was eighth with Garrett Marchbanks (ClubMX Yamaha) and Nate Thrasher (Monster Energy Star Racing Yamaha) rounding out the top 10.

250 moto one:
Cooper grabbed the first holeshot of the day with Martin, the Lawrence brothers and Hampshire in tow. In the first half lap, Jett Lawrence moved into second, with Hampshire, Hunter Lawrence and Martin settling into the top five. At the end of lap one, Hampshire made a move on Jett for second, just as Cooper crashed on the finish line jump, leaving Hampshire in the lead with Jett, Hunter, Martin, Forkner, Max Vohland (Red Bull KTM), Stilez Robertson (Rockstar Energy Husqvarna), Shimoda, Mosiman and Cooper now rounding out the top 10. In lap two, Mosiman and Forkner dropped outside of the top 10, with Mosiman buried in 18th. In the fourth lap, Jett Lawrence began to pressure Hampshire, with Hampshire responding as the duo now stretched out a five-second gap over Hunter Lawrence in third. With 21 minutes to go, Hampshire tipped over, allowing Lawrence by and giving him a 2.5s lead. Cooper reached the top five with 18 minutes to go, passing Robertson on their six lap with teammate Martin now in front of him in fourth. Hampshire recovered in two laps and began to pressure Jett at the front, but pushed the front end as he missed a rut, hitting the ground, dropping him to third and into the sights of Martin and Cooper. With 10 minutes left in the moto, Cooper made his way past Martin for fourth, with four seconds between him and Hampshire in third. At the front, Jett Lawrence led his brother Hunter by just over six seconds. Four minutes later Hampshire had charged forward to catch Hunter Lawrence as the duo began to close to Jett Lawrence at the front. Deeper in the pack, Levi Kitchen (Monster Energy Star Racing Yamaha) cracked into the top 10 in his professional debut, with rookie Vohland just behind him. With three laps to go, Hampshire finally made the move on Lawrence, now with 2.5 seconds between him and Jett at the front. Hampshire closed on the gap to the leader with just over a lap to go. Lawrence was able to withstand the late charge from Hampshire to take the win over Hampshire and Hunter Lawrence in the top three. Cooper recovered to fourth ahead of Martin, Shimoda, Brown, Swoll Kitchen, and Vohland in the top 10.

450 moto one:
The first 450 holeshot of the day went to Plessinger, side by side with Webb who assumed the lead. The duo followed by Roczen, Tomac, Cianciarulo. Plessinger got out front early around Webb, with Roczen and Cianciarulo following suit shortly after in the opening lap. Ferrandis began to charge, just behind the front group in sixth. Tomac moved into fourth around Webb in the opening corners of the second lap, the four-time champion just five seconds back from the leader. Ferrandis began to pressure Webb a lap later, getting loose in multiple attempts to pass the reigning 450SX champion. Ferrandis made the move a lap later and set out after Tomac ahead of him in fourth. Out front, Plessinger maintained a second lead over Roczen, making a mistake with 22 minutes to go, allowing Roczen and Cianciarulo to close. Roczen made a move on Plessinger for the lead and began to set out to a lead just as Ferrandis began to charge, setting the fastest lap of the race in fifth. He made quick work of Tomac and caught the back of Cianciarulo with 16 minutes left in the moto, making the pass in less than half a lap. With 15 minutes left, Roczen, led Plessinger, Ferrandis, Cianciarulo, and Tomac in the top five. Craig made his way to sixth ahead of Webb, Barcia, Dean Wilson (Rockstar Energy Husqvarna), and Sexton who was recovering from a first corner crash. As Ferrandis caught Plessinger, the duo charged forward to bring themselves within a second of Roczen, with just under 10 minutes left in the moto. With six minutes to go, you could throw a blanket over the top three, with Tomac closing in as well. Just then, Plessinger began to attempt passes on Roczen, the Honda rider responding well through the lap stretching out a bit of a lead. Ferrandis then made a move on Plessinger through the roller section, with Tomac closing it now on Plessinger. With three laps to go, Ferrandis closed the gap to Roczen and made the pass as they worked through lap traffic. Roczen didn’t make the famed Lorocco’s Leap, giving Ferrandis a near two-second lead. Roczen closed in the following lap, but Ferrandis responded and went on to win the moto ahead of Roczen with Plessinger holding off Tomac for the final spot on the podium. Craig rounded out the top five ahead of Cianciarulo, Webb, Sexton, Barcia, and Joey Savatgy (Rocky Mountain ATV/MC KTM) taking the final spots in the top 10.

250 moto two:
Cooper grabbed another holeshot, with Martin, Hampshire, Masterpool, and Swoll in tow. The Lawrence brothers were buried deep in the pack with Hunter in 11th and Jett crossing the line in 18th after the first lap. As Cooper got out to a two-second lead, things went from bad to worse for Jett Lawrence, hitting the ground in lap two and dropping even further down the field to 33rd. Hampshire got moving on lap three, making his way around Martin for second and setting out after Cooper just over two seconds ahead. Masterpool was passed by Roberson after a mistake, with Swoll all over him as they battled for the top 5. With 20 minutes to go, Cooper led Hampshire by just over one second, with Martin, Robertson, and Masterpool rounding out the top five. Shimoda was sixth with Hunter Lawrence, Pierce Brown (TLD Red Bull GasGas), Jarrett Frye (Monster Energy Star Racing Yamaha), and Thrasher rounding out the top 10, while Jett Lawrence had made his way to 19th. Hampshire began to pressure Cooper in the laps that followed, switching lines and trying everything to get around the Yamaha in front of him. Hampshire made his way around with 15 minutes to go after a mistake by Cooper. Hampshire put in some clean laps in the next five minutes to stretch out a five-second lead as Cooper and Martin maintained second and third, while Hunter Lawrence worked his way into fourth. Deeper in the field Thrasher pressured Masterpool with Vohland in tow, Thrasher making the move and into eighth place. Just behind them, Jett Lawrence closed, making a move around Vohland into the top 10 then quickly getting Masterpool for ninth. At the front with four minutes to go, Hampshire made a mistake, dropping him to second recovering quickly to stay 2.5s back from Cooper. With two laps to go, Cooper had stretched out a six-second lead over Hampshire and Martin in the top three, while a battle for fourth ensued with Shimoda chasing Hunter Lawrence. Just behind them, Jett Lawrence grabbed sixth from Brown as he looked to close the gap to the duo in front who were five seconds ahead. In the end, Cooper took the win ahead of Hampshire and Martin in the top three. Hunter Lawrence took fourth, with Shimoda rounding out the top five. Jett Lawrence salvaged sixth with Brown, Robertson, Thrasher, and Marchbanks rounding out the top 10.

450 moto two:
Aaron Plessinger grabbed the holeshot with Cianciarulo, Tomac, Ferrandis, and Craig in the top five. Cianciarulo hit the ground a few corners in dropping him to last, as Roczen charged his way through and into third early, battling with Ferrandis. Tomac made a move to get around Plessinger, but the Yamaha rider stayed on him through the next lap challenging for the lead, as Ferrandis kept the pressure on Roczen behind them. Just behind them, Sexton pressured Craig for fifth, eventually making a lunge up the inside for the pass. Roczen cased Lorocco’s Leap really hard, shaking it off and regaining composure to close back up on Plessinger for second. The top five leveled out with 20 minutes to go, everyone running similar lap times and maintaining pace with around a second between them all. Roczen hit the ground hard after Lorocco’s Leap, dropping him to sixth place ahead of Musquin by the time he recovered. Plessinger maintained the pace at the front, keeping Tomac honest staying under two seconds behind him, and keeping Ferrandis at bay. Tomac broke away at the front with two minutes to go, stretched out to a three-second lead as Ferrandis caught Plessinger for second. Ferrandis made the move on Plessinger and set his sights on Tomac at the front with two laps to go. In the end, Tomac took the win ahead of Ferrandis, with Plessinger, Sexton and Craig rounding out the top five. Roczen salvaged sixth with Musquin, Barcia, Webb, and Savatgy rounding out the top 10.