Direct updates from round three of the season in Mt. Morris, Pennsylvania.

Follow the third round of the 2021 Lucas Oil Pro Motocross Championship with direct updates from High Point in Mt. Morris, Pennsylvania via Racefeed. 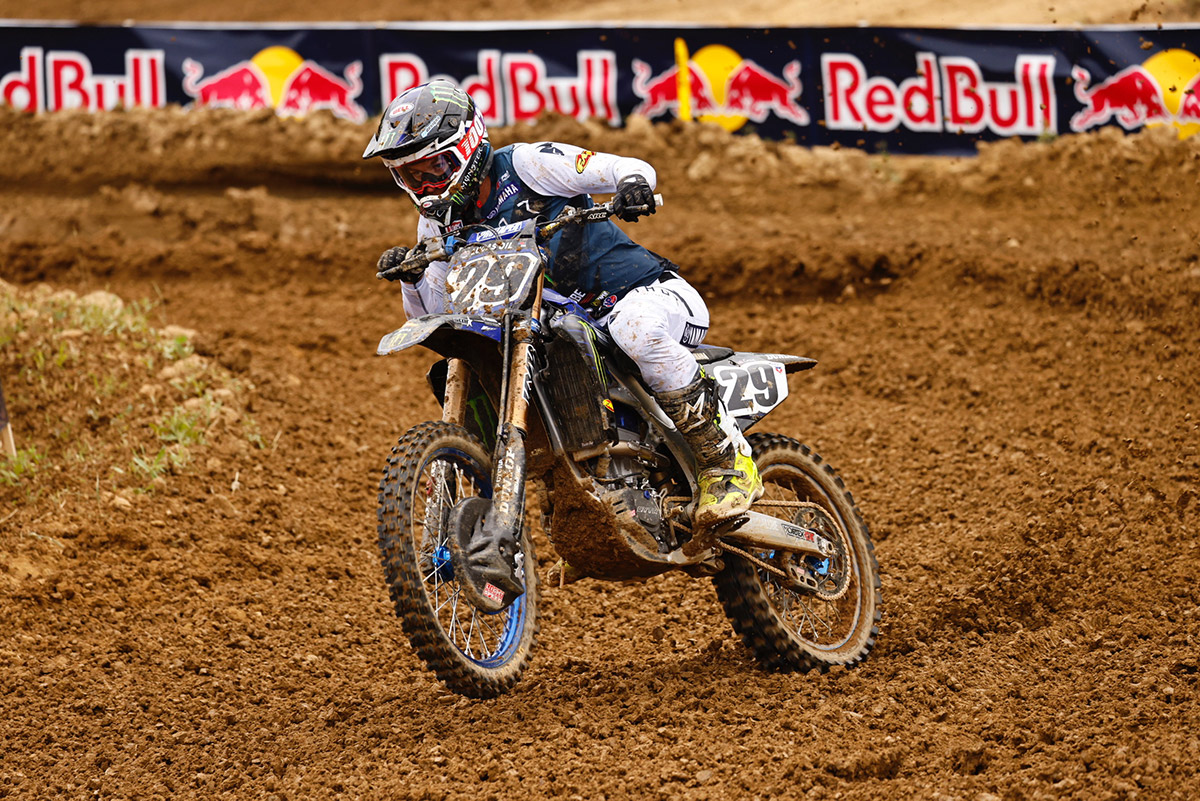 250 qualifying:
The 250 qualifying timesheets were topped by Monster Energy Star Racing Yamaha’s Justin Cooper, with his lap of 2:01.738s. Cooper’s time in the opening session led Hunter Lawrence (Team Honda HRC) who clocked a 2:02.022 for second place, with RJ Hampshire (Rockstar Energy Husqvarna) rounding out the top three. Fourth was Jett Lawrence (Team Honda HRC), ahead of Austin Forkner (Monster Energy Pro Circuit Kawasaki) who clocked a 2:02.820s lap. Sixth place was Jalek Swoll, with Garrett Marchbanks seventh as the first rider in the 2:03s range. Eighth was Jo Shimoda who’s looking for his first podium of the season, ahead of two privateers from group B, Jack Chambers (KTM) and Jace Kessler (Yamaha) rounding out the top 10.

450 qualifying:
Ken Roczen’s time of 1m59.440s from the opening session was the benchmark for the rest of the field in 450 qualifying, followed closely by Adam Cianciarulo, who actually topped the second session, with a time of 2m00.398 from said session putting him just under a second back from Roczen. Chase Sexton put his Team Honda HRC CRF450 in third, ahead of Dylan Ferrandis (Monster Energy Star Racing Yamaha) in fourth as the first rider in the 2m02s range. Fifth place went to Joey Savatgy (Rocky Mountain ATV/MC KTM) as Eli Tomac found himself in sixth overall. Seventh and eighth on the timesheets went to Red Bull KTM teammates Cooper Webb and Marvin Musquin. Rounding out the top 10 was Justin Barcia (TLD Red Bull GasGas) in ninth as the first rider in the 2m03s range, with Justin Bogle (Rocky Mountain ATV/MC KTM)  just behind him in 10th.

250 moto one:
As the rain began to fall, the first holeshot of the day went to Hunter Lawrence with Swoll, Cooper, Brown, and Hampshire in tow. Swoll challenged Lawrence early showing him a wheel in multiple corners early on, as Cooper Hampshire and Brown settled into the top five. Nichols was sixth, Jett Lawrence, Shimoda, Masterpool, and Schwartz in the top 10. Lawrence crashed in a downhill section after missing a rut and blowing through the banners on the side of the track, dropping him all the way down the order. This allowed Varzie into the top 10, as Swoll set out to a three-second lead. Hampshire began asking questions of Cooper after the opening five minutes, the duo closing the gap to Swoll at the front. Hampshire put a solid pass around the outside in a sweeper on Cooper, setting out after Swoll. He made the move a few laps later, and the Husqvarna duo stretched out a five-second lead over Nichols, after a crash by Cooper dropped him to fifth behind Jett Lawrence. Cooper recovered in the following laps, catching and passing Lawrence, with Shimoda just behind them. At the 12 minute mark, Hampshire had stretched out a four-second lead over Swoll, with Nichols a further four seconds back. Cooper was fourth with Lawrence and Shimoda just behind. With 10 minutes to go, Lawrence caught and passed Cooper, with Shimoda then pressuring Cooper right away, making the move in the following lap. With just shy under five minutes to go, Hunter Lawrence worked his way through and into the top 10 without a visor. Out front, Hampshire suffered a mechanical and dropped out, giving Swoll the lead with a six-second gap over Nichols. In the end, Swoll maintained a five-second gap and cruised to his first-ever moto win ahead of Nichols and Jett Lawrence. Shimoda took fourth with Nichols rounding out the top five. Sixth was Dilan Schwartz (BarX Chaparral Ecstar Suzuki) with Forkner, Hunter Lawrence, Masterpool, and Marchbanks rounding out the top 10.

450 moto one:
The opening 450 holeshot went to Adam Cianciarulo with Craig, Sexton, Webb, and Roczen just behind. Sexton made his way into second, as Roczen found himself in fourth and looked to pass Craig early on, doing so within the first lap. After the opening lap, it was Cianciarulo, Sexton, Roczen, Craig, and Webb in the top five. Musquin was sixth in a dog fight with Ferrandis, Tomac, Savatgy, Plessinger, and Barcia in the top 10. Musquin dropped to ninth after the opening five minutes, with Craig also dropping out allowing Ferrandis into fifth. Plessinger began to charge with 20 minutes to go, going shoulder to shoulder with Savatgy to make the pass and then making a move to get around Tomac quickly thereafter for sixth. Out front, Cianciarulo was just over two seconds ahead of Sexton and Roczen a further two seconds back. With 16 minutes to go, Sexton began to pressure Cianciarulo after a short off-track excursion allowed the chasing Honda teammates to close in. Just then, Sexton and Roczen made mistakes, letting Cianciarulo gain two seconds on Sexton, while Roczen hit the ground dropping behind Ferrandis to fourth. Further back the three-way battle for fifth heated up, with Plessinger getting around Webb leaving him in the clutches of Tomac to battle for sixth, with Tomac eventually making the pass. . With five minutes to go, Cianciarulo had stretched out nearly a five-second lead over Sexton, Ferrandis, Roczen, and Plessinger in the top five. With three laps to go, Sexton hit the ground after missing a rut with the front end, dropping him back to fourth behind Ferrandis and Roczen, giving Cianciarulo an 11-second lead. In the final corner, a lapped rider crashed in front of Cianciarulo, putting him on the ground, but he recovered to push his bike over the line for the moto win. Second was Ferrandis ahead of Roczen, Sexton, Plessinger, Tomac, Webb, Savatgy, Barcia, and Musquin in the top 10.

250 moto two:
The holeshot went to Nichols ahead of Cooper, Swoll, Hunter Lawrence, and Jett Lawrence. Cooper made amove to get into the lead around Nichols, with Swoll making the move around a half a lap later. Hunter Lawrence crashed at the end of the opening lap, rejoining the race outside of the top 20. Stilez Robertson, made his way inside the top five, taking fourth from Nichols in the second lap, with Cooper just over two seconds out front. Lawrence began to pressure Swoll eight minutes into the moto for second place, eventually making a pass with Cooper now six seconds out front. After 10 minutes, Carson Mumford (FXR Chaparral Honda) and Max Vohland (Red Bull KTM) had worked their way into fifth and sixth place, with Marchbanks, Brown, Forkner, and Masterpool rounding out the top 10. At the halfway point, Cooper maintained a five-second lead over Lawrence, Swoll, Nichols, and Mumford in the top five. Marchbanks’ charge continued, working his way into the top five, taking fourth, and beginning to close on Swoll for the final spot on the podium. With two laps to go, Marchbanks caught the back of Swoll, but Swoll dropped the hammer to stretch the gap back to four seconds. At the front, Cooper took the moto win ahead of Lawrence, and overall winner Swoll in third. Fourth was Marchbanks with Nichols rounding out the top five. Forkner took sixth as Mumford, Hampshire, Vohland, and Masterpool rounded out the top 10.

450 moto two:
Barcia, Plessinger, Cianciarulo, Tomac, Bogle. Things shuffled in the opening corners and Plessinger grabbed the lead with Cianciarulo, Tomac, and Ferrandis in the top five, while Roczen was buried down in 14th. Cianciarulo made an aggressive move for the lead on Plessinger in the opening lap, as Tomac closed in on the duo. Ferrandis got around Barcia, with Sexton following suit to take fifth a few corners later. Plessinger was passed by Tomac as Cianciarulo stretched out to a three-second lead. Roczen charged hard in the opening five minutes, working his way into sixth with Sexton, Plessinger and Ferrandis just ahead. Ferrandis made a move on Plessinger first as the four of them were mere bike lengths from each other. Roczen made a pass on both Plessinger and Sexton in the same section and caught Ferrandis quick. Things settled out for a lap, but Roczen set up Ferrandis with an impressive move to take third. Ferrandis didn’t hold back, the duo going side by side with the Yamaha rider taking the position back. Out front Tomac charged to catch Cianciarulo, making the pass with 18 minutes left to go. Cianciarulo fought back immediately, the two making contact but couldn’t complete the pass. Tomac stretched out a two-second lead over Cianciarulo, as did Ferrandis over Roczen with 15 minutes to go. Ferrandis caught Cianciarulo for second with Roczen close behind, while Tomac worked his way out to a five-second lead. Ferrandis made contact with a lapped rider with eight minutes to go, giving Cianciarulo some breathing room and allowing Roczen to close in. Cianciarulo made a handful of mistakes allowing Ferrandis and Roczen to close, Holding off Ferrandis’ charge, the trio going three-wide into a corner. Ferrandis took second, with Roczen third and Cianciarulo just behind in fourth. Things settled out and Tomac cruised to his first podium of the season with a moto win ahead of Ferrandis and Roczen rounding out the podium. Fourth went to Cianciarulo ahead of Sexton rounding out the top five. Barcia was sixth with Musquin, Plessinger, Savatgy and Craig rounding out the top 10.