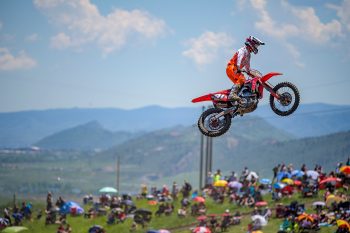 Hunter Lawrence continues to build into Pro Motocross form, notching his first overall podium of the season at Thunder Valley after finishing sixth at the opening round.

After starting the 2021 Lucas Oil Pro Motocross season with a 6-5 finish for sixth overall at Fox Raceway, the Team HRC rider closed the gap to the front with 5-3 moto scores at Thunder Valley.

Not completely satisfied with the finish, Lawrence says suspension changes during the week helped propel him to his first podium of the season.

“I think we definitely rode better,” Lawrence explained. “We did a bit of work with the team during the week testing suspension stuff, which definitely helped.

“But yeah, starts were a little better, obviously, the second moto with that little crash wasn’t ideal, but we were in a pretty safe solid third, with the gap to fourth place [being] pretty far, so I had a cushion there.

“It was definitely a step better than Pala, so we’re happy with it. Nothing to jump up and down about but it was alright.”

Despite a successful campaign in Monster Energy Supercross this year, Lawrence admits he’s still rebuilding from last season’s shoulder injury as the outdoor championship gets underway.

“I feel like the outdoors really puts a magnifying glass over all the areas that aren’t 100% yet,” he continued. “Obviously coming back from my shoulder injury and stuff it was quite a lot to rebuild and in Supercross I could manage it pretty well.

“So we’re still building that and just bike time, [as] supercross is so much slower speed than outdoors. But no we’re doing good, we’re working hard, and we’ll be where we want to be shortly, just building and enjoying the process.”

With the series now taking a weekend off, Lawrence will get a bit of extra time to continue the process ahead of round three at High Point on 19 June.