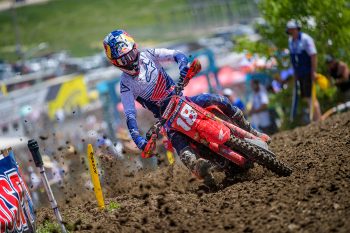 Jett Lawrence rebounded from his fourth-place finish in moto one at Thunder Valley to grab a win in moto two, finding his flow and working his way past Justin Cooper (Monster Energy Star Racing Yamaha) for the win.

Round two of the 2021 Lucas Oil Pro Motocross championship didn’t get off to the best start for the Team Honda HRC rider, a fourth-place finish in moto one saw him finish 26 seconds behind winner Jeremy Martin (Monster Energy Star Racing Yamaha).

“I was in fourth, and the boys were just way faster than me in the first moto,” Lawrence explained. “I just had to make sure to put my head down in the second moto and give it to them.”

For the second moto the second-year 250 rider did indeed put his head down, battling with the day’s overall winner Cooper, and eventually setting sail to win the moto by 15 seconds to take second overall.

“I got a really good start,” he continued. “Justin [Cooper] was in front of me and we had a really good battle in the first few laps, going back and forth; I had a lot of fun with that.

“I knew if I could get him and kind of crack him a little bit, he would feel like he was going to make a mistake, but he made it hard for me and it was fun.”

When asked what changed between moto’s that led him to the dominant second moto, Lawrence cited just an overall better flow and a few lines he picked up behind Cooper in the early stages.

“I think in moto two I just got a better flow to be honest,” he said. “In the first one I just didn’t really gel with the track. The second one I was able to get out and be behind [Justin] Cooper and was able to follow his lines.

“He had a lot of good ones and I was able to pick on and I had some different ones in other spots, so he kind of helped me get into my flow a bit. So yeah, second one I just got into a really good flow.”

Lawrence and the rest of the field will have the weekend off to recover and prepare for round three of the series on 19 June at High Point in Mt. Morris, Pennsylvania.