Overall winners Roczen and Cooper recall second round in Colorado

Round two of the 2021 Lucas Oil Pro Motocross season is in the books with Ken Roczen taking the 450 overall and Justin Cooper taking the top spot in the 250 class. Both riders were made available to the media following the race for this Debrief interview. 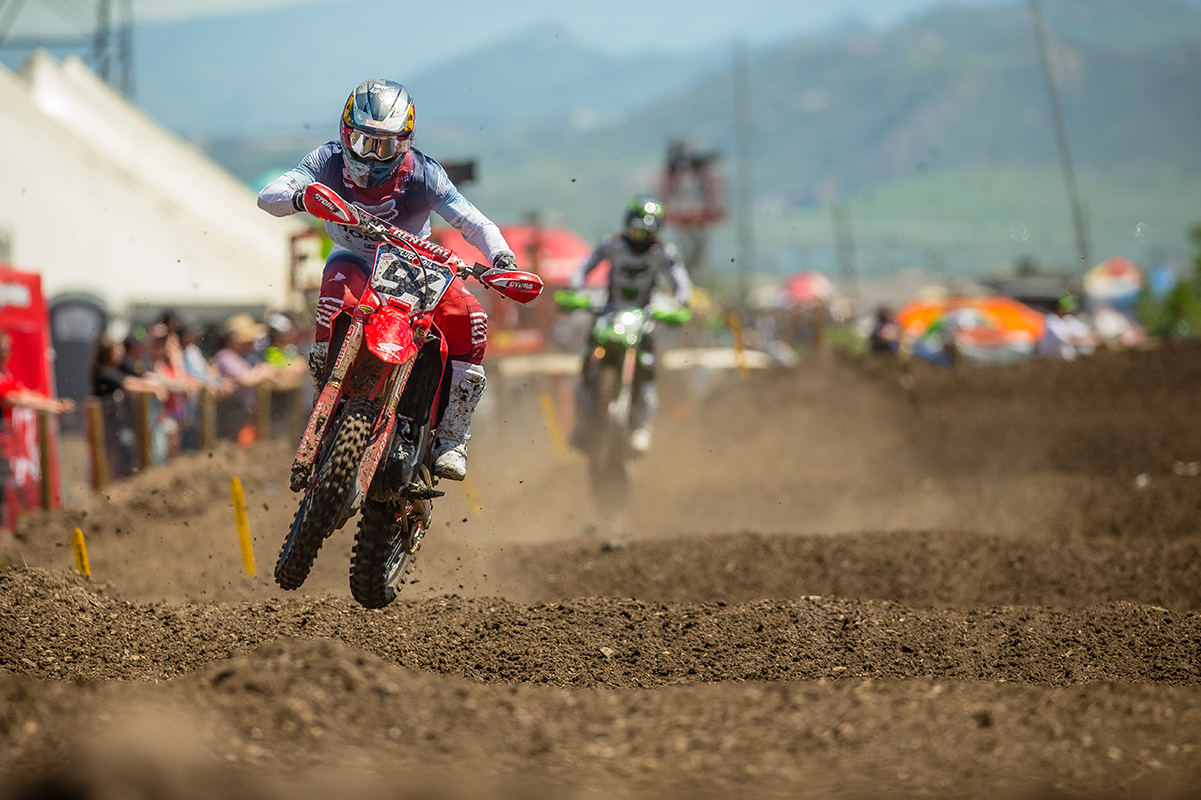 You were not exuding confidence coming into this season, you’ve now won three of the four motos. Are you surprised with your own performances to start this year?

Yeah, a little bit to be honest. As you said, I wasn’t really full of confidence and definitely had some work to do. But luckily the muscle memory starts kicking in and I’m starting to feel better. We did some work to the bike as well that I wasn’t 100% sold on when I left the track during the week, but you’ve gotta go racing and prove that it’s better and I actually really enjoyed that today. I knew what the bike was doing and also, I like Thunder Valley in general. I think the ruts and the clay kind of dirt just suit me very well. So I dealt with the bike really well and honestly enjoyed both motos. I really enjoyed the first one, obviously, me, Adam [Ciancuaulo], and Dylan [Ferrandis] battling was super fun. Not just because I won but in general, just being there the whole entire moto and us three battling and passing each other was a lot of fun. I also liked how, I know in the beginning it’s been a bit of a debate with not ripping [the track] as deep, but I didn’t mind it because it allowed us to move around on the track a lot and use a lot of different lines, and I really enjoyed that side of things.

In the Supercross series, you talked about settings quite a bit that you were changing, and you just referenced it here. I’m just curious if you could elaborate a little bit, a rider at your level do you ever find settings that you just run with or is there always a search to get more out of the bike?

The most difficult part is really just finding a good base, right? So every rider is different, so for example, Chase [Sexton] likes his bike set up completely different than I do. I just feel like we weren’t there with the base that we had coming off of Supercross, it was not good enough and I was pretty boisterous about it. Obviously, I still know how to ride a dirtbike but at the same time I had a little bit of difficulty, I just needed time on the bike, needed time riding moto, and get used to some stuff. I’m pretty pumped with what we have come up with so far and then obviously there’s a good balance of, you know, I’ve gotta do some motos too, I haven’t done a 30 plus two [laps] until almost the week before Pala. So there’s like this perfect balance of getting some testing in and the time runs away as well. Then basically, what I raced with in Pala gave me a good idea of what the bikes doing and what I need. So based on that and what our thoughts were, we had a couple of days under our belt with some motos and also doing some testing Thursday. And then again, it’s not easy because I rode well at Pala, but I felt like we needed to get the bike better and help me out a little bit more. But there are a thousand ways to skin a cat, so just because you try some new settings doesn’t mean that that’s it. So I was a little unsure about it on Thursday but came here and we made a tiny clicker adjustment after first practice and I pretty much just ran with it. I think what helps as well is just more time with that setting now that I’ve put it through a couple of motos, I felt solid about it. Obviously, it would be good to try the setting on a couple of other types of dirt. We always want to try to get the bike better but you’re never going to be able to get it 100% in everything. So it’s really just if I can deal with the negative if it has a lot of positive [traits]. I was really happy with what our suspension guys came up with, and not to mention I also have a new suspension guy Trey, that came from Geico [Honda] back in the day, he’s helping me out too. So far I was pretty pumped with what the team came up with.

In the first moto you had to find some fire and fight for the win, did that moto win feel any more special than the second one? Also talk us through the battle with Ferrandis and Cianciarulo.

I think it did, I think the first one felt a little bit better, but honestly it’s so hard to say. After the first moto was done, it felt so rad, because getting passed and coming back it just feels good, it’s different right? I’ve been getting back to the outdoor flow, so I feel like I’m finding some good lines. So, after I made some passes and I was leading, the riders behind me can obviously see some lines and Adam [Cianciarulo] is known for putting the heat down especially in the beginning. So once he got by me, I kind of just did the same thing, I was like ‘okay, lets see where he’s going’, and kind of followed him around and found some lines there. Then Dylan [Ferrandis] passed me as well and I did the same thing, I basically just found a couple lines that were better than what I was doing and just got into a flow. I feel like late into the race I charged the downhills a little bit hard and I had my areas where I was gaining on him, so I always had to close the gap to Dylan a little bit and I knew once we got around Adam I just kind of wanted to stay there and pressure him a little bit. So I found these spots where I felt like I was better, so if I could just get my stuff together in some of the other areas where I’m close to him, I felt like I could dive in there and that’s exactly what I did.

It appears you want to let everyone know that when you said you didn’t know where you were coming into the season, that was not mind games, you were not playing possum, you were just being honest. Do you want to clear that up for the record?

Yeah, when I read that I think it was [Kris] Keefer or someone that put it out there, I read it and I can see how it looks like that from the outside, but I promise you guys I was not. You can probably ask all the other riders [on the press conference] and some of the teams, it was a bit of a struggle and I was not playing possum. 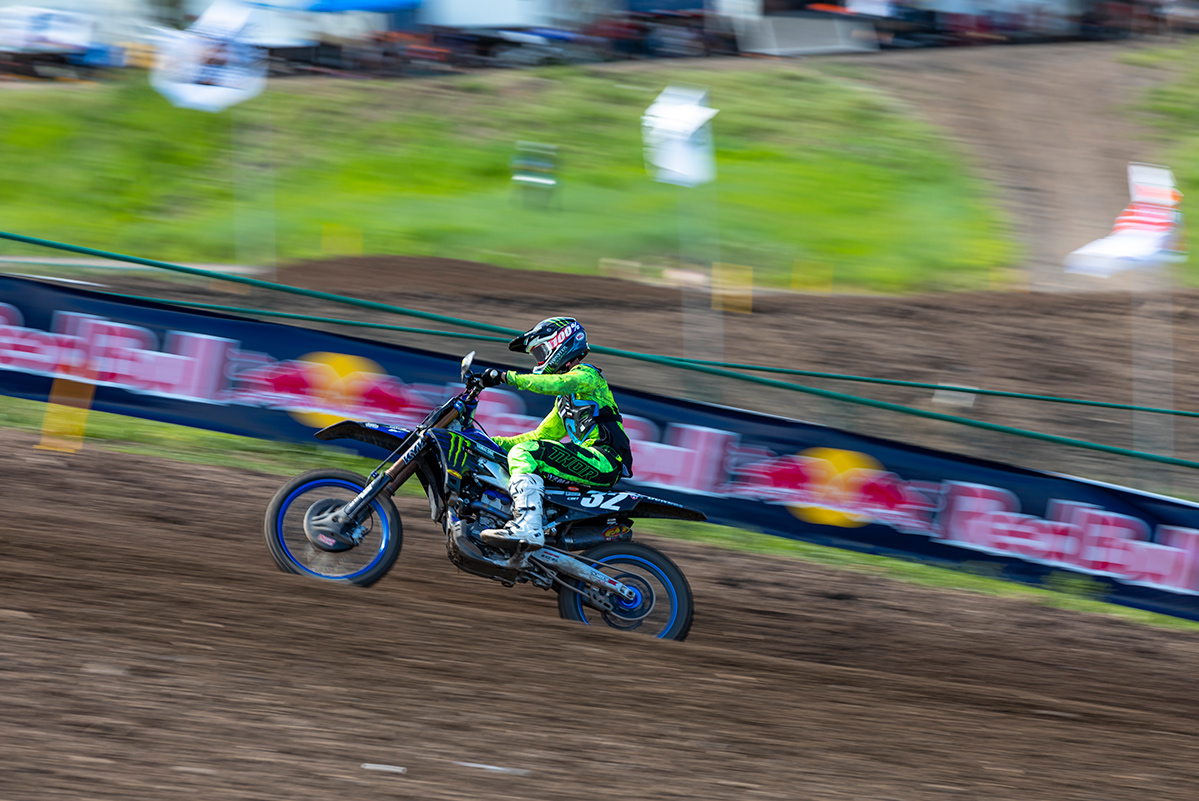 What is it about this track that seems to work for you? You won this race last year and you were fast in qualifying. Do you surprise yourself or is there something you can put your finger on as to why it works for you?

I really can’t. I really just gel with the track and I feel comfortable out there. It’s really fun for me and I enjoy being in this state. I think the altitude plays a lot into it and yeah, I just felt really good on the bike all day. Definitely got a little bit tired, we were pushing really hard in both motos. It was a fun day battling with these guys and its really where we wanted to be and where we strive to be. It’s been a slow start, but we’re going to get kicked into gear here and yeah, really good day for me and bummer to see Jeremy [Martin] go out, that’s not really what I was hoping for. But all in all it was a good day for the team, we can definitely build from here, we’ve got a weekend off and just going to keep working on the stuff that we need to.

Can you talk a little bit about what you’ll do in the upcoming two weeks off? How do you prepare mentally and physically when you have some downtime after you’ve had such a good run in the last two races?

Yeah, obviously we’re just getting started in this championship, so we’re not really burnt out or anything like that. We really haven’t had a break like this early on in a Pro Motocross championship before, so it’s a little bit different but it gives us more time to work on stuff that we need to work on. I definitely don’t think we’re where we need to be yet, but we’re definitely taking steps there,  because we were a lot better than last weekend. So it was a good day overall and I think going into this two week break we’re going to work on our weaknesses and I think that goes for everyone else too. But yeah, really excited to keep racing and I wish we didn’t have a weekend off but you know, it opens it up for some people to do some things with the bike and testing and all that. I think mentally and physically we’re just going to keep getting into the outdoor grind. We didn’t really get too much time to prep coming off the Supercross championship, but we did what we could and we showed up and we’re in a really good spot, so we’re going to keep the momentum rolling and just get more into the outdoor flow.

Take us through those passes that you applied to Jett [Lawrence] early in the second moto, and then the one where he got you and it looked like he almost took you to the ground. What’d you think of that and are you fine with it?

Yeah to be honest, I forgot all about the ones early in the moto, but you know it’s fun. I wanted to make it interesting, you know, no one wants a boring race. I definitely didn’t want to give up the lead on lap one, I don’t like doing that, so I made it hard for him. I felt him get close a couple of times there in that turn, and I really felt like I was taking the right line there. I was kind of missing the big breaking bumps and the big holes. So I didn’t think he’d be able to get that close, so I’ve gotta watch it back and see how he did it. But I hear him get on it early and I knew he was going to come to the outside to try and block me and it took pretty much everything I had to keep the bike up. He came across pretty hot and it’s all good, it’s racing and I would do the same thing. All and all, it was a fun battle and I just wish I could have put a bit more of a fight up at the end, but I was pretty drained from both motos. I had pretty good battles in both motos and it was a dogfight so, I was definitely a little bit winded toward the end there but I’m sure I think everyone was, so just gotta push through that stuff. Yeah, fun day overall though, a lot of battling.