Ongoing back issues cause Osborne to sit out second moto

Status of injury unknown ahead of Pro Motocross two-week break. 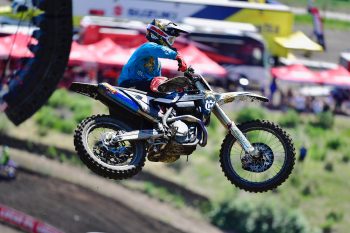 Defending 450MX champion Zach Osborne was forced to sit out the second moto of round two at Thunder Valley after complications with his ongoing back injury.

Osborne’s start to round two of the 2021 Lucas Oil Pro Motocross series looked to be going great, qualifying seventh and jumping out to a fourth-place start in the opening moto of the day, charging with the lead group early in the moto.

Halfway through the moto, Osborne’s bulging disc in his back that was sustained while training during the Monster Energy Supercross season began to flare up, dropping him to 12th in the moto and eventually causing him to sit out the second moto.

The injury was said to be 100% healed and not giving him any issues at the opening round of the season at Fox Raceway as finished 13-5 for 10th overall on the day.

With two weeks off before the third round of the championship, it’s unclear if Osborne will be forced to sit out as the series heads to High Point Raceway in Mt. Morris, Pennsylvania on 19 June.