Direct updates from round two of the season in Lakewood, Colorado.

Follow the second round of the 2021 Lucas Oil Pro Motocross Championship with direct updates from Thunder Valley in Lakewood, Colorado via Racefeed. 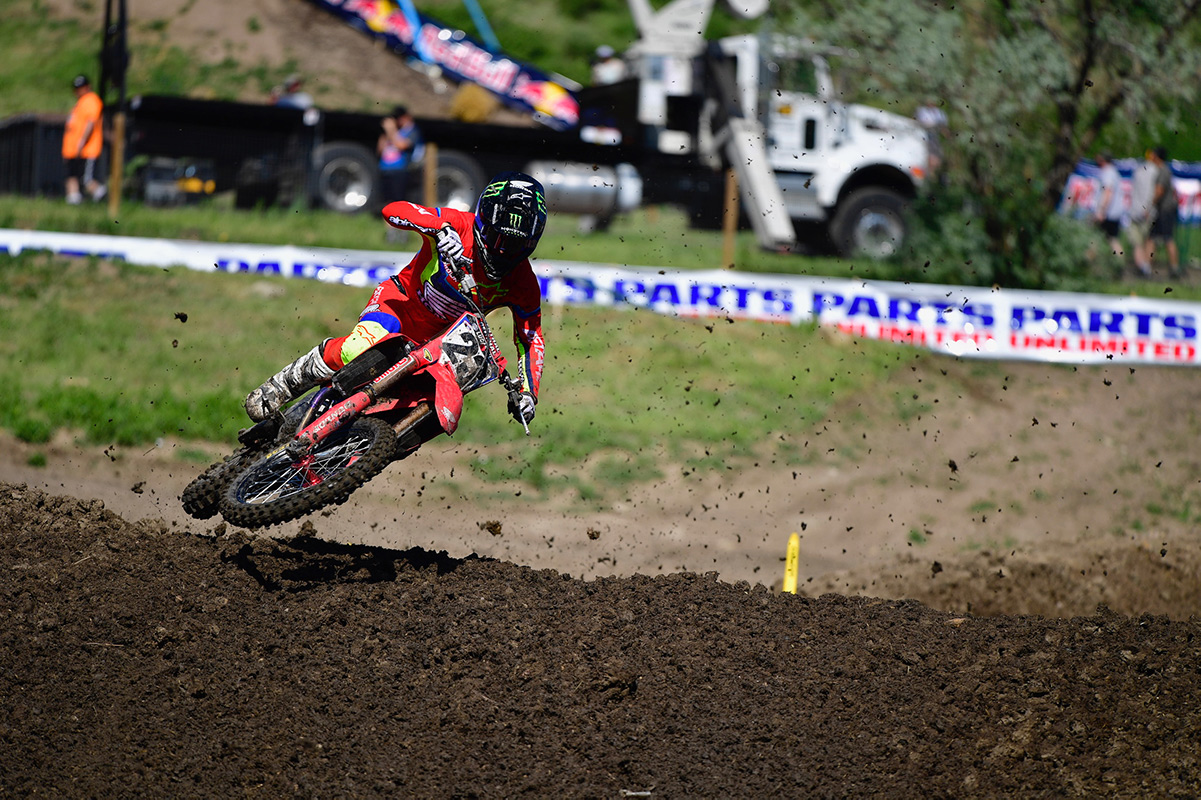 Ken Roczen (Team Honda HRC) led the 450 class in both qualifying sessions with his lap of 2:05.667s in the first session of the day set the benchmark, besting Adam Cianciarulo in second who clocked a 2:06.755s lap in the opening session. Cianciarulo’s teammate Eli Tomac came out firing for qualifying in his home race to take third as the first rider in the 2:07s lap range. Fourth was Christian Craig aboard his Monster Energy Star Racing Yamaha ahead of teammate and last week’s winner Dylan Ferrandis rounding out the top five. Joey Savatgy (Rocky Mountain ATV/MC KTM) had a solid qualifying at round two to take sixth, with defending champion Zach Osborne (Rockstar Energy Husqvarna) landing in the seventh spot. The first rider in the 2:08s range was Chase Sexton (Team Honda HRC) who took eighth place. The final two spots inside the top 10 went to Red Bull KTM teammates Cooper Webb and Marvin Musquin in that order, respectively.

250 moto one:
Jeremy Martin took the first holeshot of the day ahead of Jett Lawrence, Cooper, Robertson and Masterpool. Masterpool worked his way past Robertson with Mosiman in tow as the front three gapped the field. Moments later a red flag came out after a crash involving Jerry Robin, putting the race on hold, setting up a full restart. In start number two it was Cooper ahead of Martin, with Josh Varize, Hampshire, and Jett Lawrence in tow. Cooper quickly made a break from the field as Hampshire and Jett got around Varize, bringing Hunter Lawrence along with them. With 26 minutes left in the moto, the top five settled in with around one second between each of them, as Thrasher, Robertson, Mosiman, Varize, and Swoll maintained the final positions inside the top 10. A lap later, Lawrence caught up to Hampshire for third, but Hampshire responded, pulling away from Lawrence and gaining ground on Martin in second. Hampshire and Martin turned the pace up in the minutes that followed, catching Cooper at the front and dropping Jett back two seconds. Deeper in the field Garrett Marchbanks (ClubMX Yamaha) made his way into the top 10, working his way to eighth. With 16 minutes to go, Martin made the move around Cooper for the lead and pulling a one-second gap pretty quickly. Hampshire then caught Cooper and began to apply pressure for a second. Cooper stretched the gap out over Hampshire again with five minutes to go as Dilan Schwartz (BarX Chaparral Ecstar Suzuki) and Thrasher worked their way inside the top 10. At that point, Mosiman encountered issues and pulled into the mechanic’s area ending his run inside the top 10 and moving Shimoda into sixth. With two laps to go, Martin had over a three-second lead from Cooper, with Hampshire another few seconds back from there. Hampshire smelled blood in the water at that point and began to charge for second. Deeper in the field Nichols cracked the top 10 and worked his way into eighth, while Forkner recovered to 13th. As the checkered flag came out, Martin took his second moto win of the season, with Cooper second and Hampshire third. Fourth went to Jett Lawrence, with his brother Hunter just behind him. Shioda took sixth, with Marchbanks seventh. The final three spots in the top 10 went to Schwartz, Nichols and Swoll.

450 moto one:
Webb, Cianciarulo, and Ferrandis launched off the gate and went side-by-side through turn one with Cianciarulo getting the holeshot ahead of Ferrandis as Roczen sweeps past Webb for third. Roczen quickly made a pass on Ferrandis into a corner then flew past Cianciarulo for the lead through the following roller section. Osborne made a pass for fourth on Webb with Sexton, Tomac, Craig, Musquin, and Plessinger rounding out the top 10. after two laps, Tomac began to pressure Sexton as the duo were all over Webb who was fifth. Sexton and Webb swapped positions a few times before Sexton made the move around the outside after staying low over a jump. Out front with 25 minutes to go, Roczen gained a one-second advantage with Ferrandis and Osborne two seconds back from that. Tomac then began to pressure Webb hard looking for a way around, making the move a lap later, dropping Webb into the clutches of Plessinger and Craig. Plessinger made the move a half-lap later setting after Tomac. Cianciarulo closed the gap on Roczen as the clock hit 20 minutes left after setting the fastest lap of the race. A lap later, Cianciarulo caught Roczen and quickly made an aggressive move on an unexpecting Roczen for the lead. Deeper in the pack Barcia made his way into the top 10 with Musquin just behind in 11th. Ferrandis then closed the gap on Roczen and Cianciarulo with 16 minutes left, setting up a three-rider battle in the second half of the race. At that point Sexton made the move on Osborne for fourth place after a crash by the defending champion.. Ferrandis closed on Roczen with 10 minutes left, but a lapper held him up slightly giving Roczen a gap. Roczen then set out after Cianciarulo and closed the gap, with Ferrandis catching back up quickly. Ferrandis made a move up the inside of Roczen, Roczen attempted to counter but was unsuccessful. Deeper in the field, Craig worked his way into sixth, with Barcia behind, then Webb, Tomac and Musquin behind as the battled for sixth heated up. Ferrandis up front caught Cianciarulo, making a pass with slight contact up the inside with five minutes to go. Cianciarulo attempted a pass to no avail, Ferrandis then checking up Cianciarulo in the following corner, allowing Roczen to close in and make the pass for second. Ferrandis laid down a blistering lap to gap Roczen by two seconds in the following lap. Roczen caught Ferrandis with two laps to go, making a dive up the inside causing Ferrandis to sit up, sending him off track and Roczen to the lead. With a lap to go, Roczen had just one second over Ferrandis. In the closing lap, Ferrandis made a slight mistake allowing Roczen to take the moto win ahead of Ferrandis and Cianciarulo. Fourth went to Sexton with Plessinger in Fifth just ahead of Craig. Barcia worked his way through the pack to seventh with Webb, Musquin and Savatgy taking the final spots in the top 10. Tomac and Osborne finished 11th and 12th respectively.

250 moto two:
The holeshot of moto two goes to Cooper ahead of Jett Lawrence, Vohland, Hunter Lawrence, and Hampshire. Martin got sideways coming out of the start and was buried in the pack. Lawrence and Cooper swapped positions with aggressive passes in the opening lap as Hunter moved into third as Martin crossed the finish line 17th after the first lap. Hampshire hit the ground while running in fourth place, giving the position to Jarrett Frye with Swoll in fifth. Sixth was Forkner ahead of Brown, Thrasher, Vohland, and Shimoda rounding out the top 10. With 23 minutes left, Martin hit the ground, slowly remounting and heading to the mechanic’s area. Meanwhile, Lawrence pressured Cooper at the front, as the clock ticked down to 20 minutes left. Lawrence closing the slight gap and making an aggressive move on Cooper for the lead. In the following laps, Jett set out and took a three-second lead, the duo 25 seconds ahead of Hunter Lawrence with 12 minutes to go. Shimoda continued to work his way through the pack taking fourth place from Shimoda and beginning to close on Lawrence in third after starting outside of the top 10. Behind him, Mosiman charged past Frye for sixth allowing Swoll and Nichols to close on him. Nichols and Swoll battled in the next few laps, with Nichols getting by for sixth and making it stick. Just ahead of them, Mosiman closed on Shimoda, the duo going side by side for a few sections before Mosiman found his way around. At the front with five minutes to go, Lawrence had just shy of a six-second lead over Cooper, with Hunter Lawrence 20 seconds back from him. Mosiman began to close on Hunter with Shimoda just over two seconds back from him. Mosiman made a mistake shortly thereafter, allowing Shimoda back past for fourth. With a lap to go, Jett had stretched out a 10-second gap over Cooper with Hunter Lawrence, Shimoda and Nichols in the top five. As the checkered flag came out, it was Jett Lawrence taking the win by 15 seconds over Cooper who took the overall win on the day with 2-2 moto scores. Hunter Lawrence rounded out the podium with Shimoda and Nichols taking the final spots in the top five. Sixth was Swoll with Marchbanks, Forkner, Brown, and Thrasher rounding out the top 10.

450 moto two:
The final holeshot of the day went to the Red Bull KTM duo of Webb and Musquin with Roczen and Barcia just behind. Roczen made quick work to get into second, bring Cianciarulo along with him. Roczen set out after Webb and made the pass within the next few corners. Second place finisher in moto one Ferrandis was back in ninth after a half lap. Cianciarulo lost the front near the mechanic section, remounting quickly into seventh. As the field settled out after lap one, it was Roczen over, Webb, Barcia, and Plessinger in the top five. Musquin was sixth with Cianciarulo, Tomac, Ferrandis, and Craig rounding out the top 10. Sexton was further back in 13th place. Cianciarulo charged hard in lap two, making two passes and getting himself back into fifth, then making short work of Savatgy to get into fourth. After seven minutes, it was Roczen out front by nearly eight seconds, with Barcia, Plessinger, Cianciarulo, and Musquin in the top five. Ferrandis was working his way through and into eighth while Tomac faded to 11th. Savatgy hit the ground dropping from sixth place. Ferrandis worked his way around Musquin to take fifth with just over 20 minutes left, while Plessinger began to pressure Barcia for second. At the 15 minute mark, Roczen led by over 12 seconds from Barcia, with Plessinger, Cianciarulo and Ferrandis rounding out the top five. At that point, Ferrandis closed on Cianciarulo gaining heaps of time per lap. Ferrandis found his way around Plessinger as he continued his terror toward the front, while Sexton worked his way into sixth place bringing Craig with him in seventh. With three minutes to go, it was Roczen by 17 seconds over Barcia, Ferrandis, Plessinger, and Cianciarulo. Deeper in the field Musquin dropped to eighth, just in front of Webb and Tomac rounding out the top 10. With three laps to go, Ferrandis caught the back of Barcia, setting up a battle for second in the closing laps. Sexton’s charge continued, getting by Sexton with two laps to go, while Ferrandis made an inside move on Barcia for second. Ferrandis charged hard in the next half lap to put some breathing room between himself and Barcia.