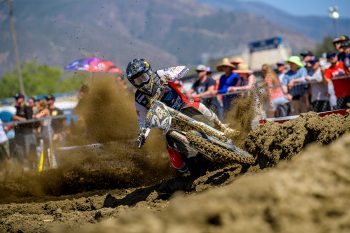 In his return to action following an injury he sustained in the third round of Supercross, Rockstar Energy Husqvarna rider RJ Hampshire is confident he can be better as he looks to build off his top-five finish in the opening round of Pro Motocross.

Despite not lining up for a race since January, Hampshire’s return to racing for the opening round of Lucas Oil Pro Motocross saw him come out firing in the opening moto to bring home third place.

““I’m happy to be back at the races,” Hampshire explained. “I felt good all day. The first moto, I didn’t get a great start but we made some good passes and held onto third, which was sweet coming off injury and getting back racing.”

While he found himself on the ground at one point in the second moto while attempting a pass for fourth, he recovered to seventh place, salvaging a fifth overall.

As the series heads to the second round of the season this weekend at Thunder Valley in Colorado, Hampshire is confident that they’ll be better as the season wears on.

“Looking at our speed and comfort this weekend, I know we have a lot to build on and we will be better,” he concluded.

Hampshire showed plenty of promise last season, notching three overall podiums and taking an overall win at RedBud II, proving he’s got the pace to be a contender if he can find consistency in 2021.