Overall winners Ferrandis and Lawrence recall first round in California.

The first round of the 2021 Lucas Oil Pro Motocross Season is in the books with Dylan Ferrandis taking the first overall of the season in 450MX, while Jett Lawrence grabbed the overall in 250MX. Both riders were made available to the media following the race for this Debrief interview. 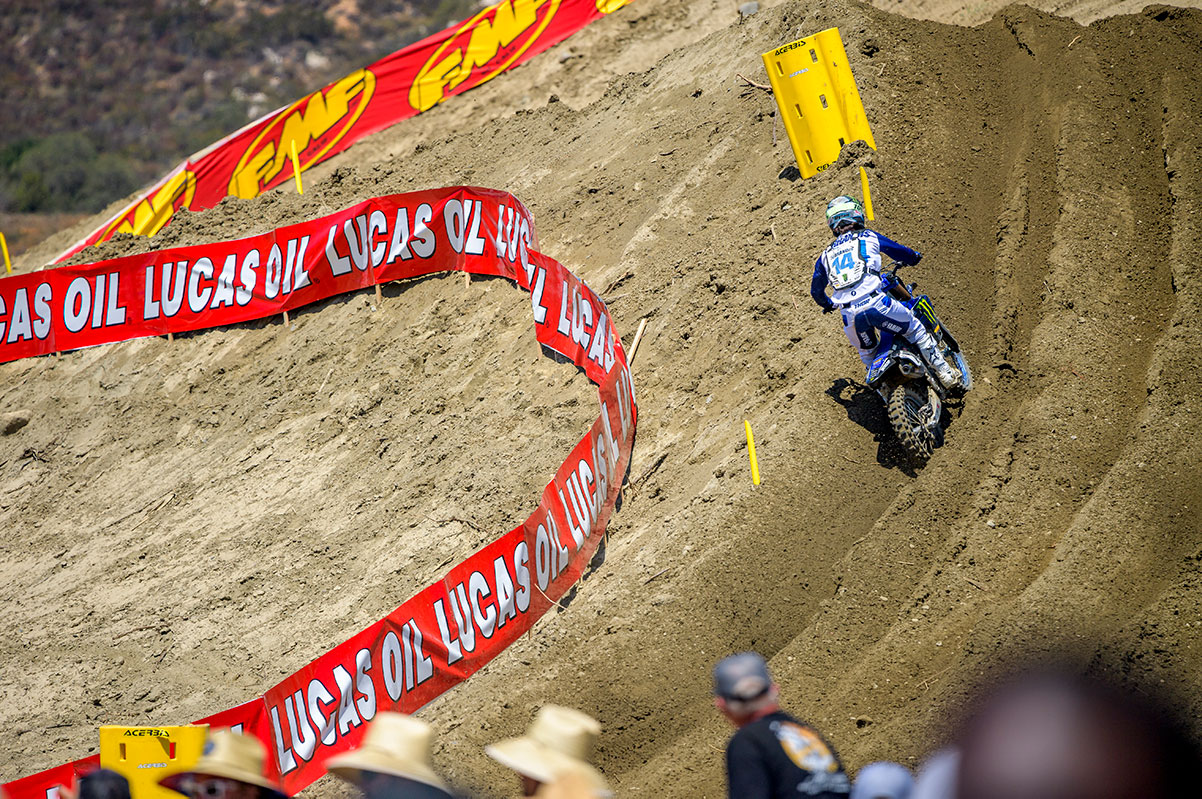 Did you expect this out of yourself or are you surprised? Talk about your day, your first win and how you’re feeling now with the red plate.

I didn’t really expect that when I woke up this morning, I never felt that I would leave the track with the red plate and leading the championship. So it was kind of a surprise but at the same time, after Supercross, we put in the work, we spent a lot of time working on the bike, and yeah, I just gave everything I had today and it worked well for me. So really happy, like you said winning round one as a rookie is amazing and was such a great feeling. I just felt good today and gave everything as I said. A good start in moto one helped a lot but in moto two I had a bad start so I had to come back through the field. I passed some really strong riders all day so I was really proud of that. Now for sure, leading the championship is a different position. So now next week I will have the red plate and it’s going to be something to manage but I was in that position last year and I will give everything and we will see what happens.

Now that you have the red plate, does it change your game plan at all going into round two, or are going to keep going with what you had heading into round one?

No, it’s always the same, in round two I will try my best and see what we’ve got after the weekend. But like I said before this 450 field is so gnarly with so many past champions in the top 10 or 12, anything can happen. It’s going to be normal I think to have a bad day and to be off the podium sometimes, for many riders, but we will see. I will try the best I can and try to hold this red plate for sure.

What was the reaction like from the Star Racing team when you got back, obviously a big result for those guys as well?

I think that it was a big relief for all the Yamaha people because they’ve been looking for that win for a long time now. Giving that win for round one was really important and yeah I think now everyone has [a sense of] relief like ‘okay, now we’ve got one win and we’re back on the top spot’. I think that was the reaction for most everybody and they were happy to have put so much work in with everyone in the team, especially me, because I’m quite hard [on] the people in my team [wanting to] have the best bike and always do more, testing more and putting a lot of hours on the track. Arriving early and [leaving] the track really late, so I think I’ve been really hard on them the last four weeks, and maybe the last five seasons or so. But I think it was a big relief that I think they could see that all of the hard work we spent testing, the hours we spent, finally paying off.

During the Supercross season, you got on the podium early in the year and never got back. Are you going to take any different approach to the motocross season to ensure that doesn’t happen?

I think my podium in Supercross, I was just at the right spot at the right moment, and the track on this day was so different than normal and I just figured out how to ride the track at Houston and Houston 2 to make the podium. But yeah, I think after that I just felt like my bike set up was the biggest problem and that’s why we worked all Supercross season to make the bike better. But yeah, now on motocross I feel like we had more time to get ready, more time to get bikes and we proved it today by having two Yamaha’s on the podium. So I think Houston was some circumstances and maybe a little bit of luck, I don’t know, but was just a good day for me and after that, I couldn’t find my way on the podium. I feel like today was different I was on the podium for two motos instead of just one race in Supercross, so I already proved it twice and just going to try every weekend and if it doesn’t happen, I also understand. Like I said the field is so [stacked], and I think nobody in this season can be on the box every weekend. 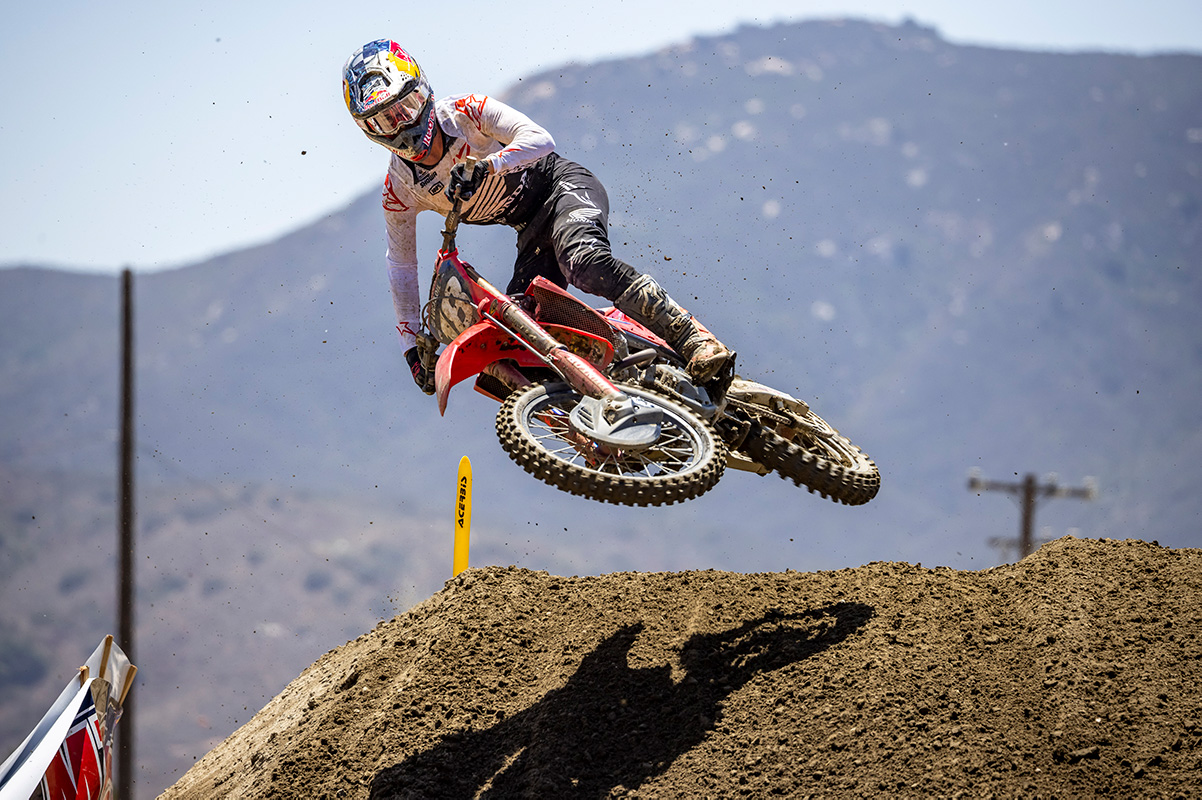 Big day for you, you started off fastest in practice, and that kind of set the tone for your day and you battled throughout the day for this overall. Was it the track, do you just love Fox Raceway or whats the magic with this place and do you feel like this is the first step to being a title contender and being in the hunt every week for the rest of the season?

Yeah my day went pretty smooth in practice like you said, going P1 and like I said any one can do a fast lap, so it didn’t mean too much. But yeah first moto I didn’t give myself very good hopes of a podium at least but I ended up carving my way through into third and then [Max] Vohland had some bad luck with a bike malfunction so I ended up going into second. I could still see Jeremy [Martin] up there so I kind of put up a little bit of a charge, but I didn’t want to over do it and make a silly mistake like I feel like I’d used to, I’d go and send and end up weeding myself. So I just kind of kept my same pace and closed the gap a little bit. So it was good to know where he’s at, where I’m at.

Then yeah, going into the second moto I was kind of hoping to just get a better start, at least be inside the top 10 because I know I can charge my way to the front after that first moto. Sure enough, I think I was eighth or something, I can’t quite remember but yeah, I made my way into third and it took my a while to kind of figure out what the two Star boys were doing up front. They were both really on it, I couldn’t get close enough at first to kind of read where there lines where and study them a little bit. But J-Mart [Jeremy Martin] ended up making a mistake a little bit in one spot so I was able to kind of capitalize on that and get close enough to watch what he was doing because obviously he has the most experience out of everyone in the class right now so it’s good to learn from him. Ended up getting the pass done a few laps after that, then I kind of set my eyes straight on to [Justin] Cooper and caught him fairly quick thankfully. I think he might have made a mistake but then I ended up getting the pass done the same lap as I did J-Mart which was really good.

But no, Pala’s a good track it was really square edge and technical today, so I feel like it kind of helped me a little bit but today I just felt really good. I think if it was at any other track it would have been the same, I just felt really good on the track and felt really strong because I’ve been putting the work in so I’m glad to see that it’s actually kind of paying off. So I can’t wait for next weekend, hoping to maybe do something similar.

In that first moto when you’re as far back as you were, do you look around on the track to understand what position you want to get to, or are you just taking it one rider at a time that entire time as you’re going through the field?

I obviously look up a little bit to just kind of judge if I’m losing time or gaining time with going through some other riders and making some passes. But I try to stay fairly present and just kind of look at ‘okay, if I get this person how much time do I make up or lose’. Whatever the situation is, it changes, I’ll look up in certain spots and say okay the leader’s are there. Then I’ll put my head down and rear end up and keep charging for another few laps and I’ll check again, ‘okay I’ve closed the gap,’ or ‘crap, I’ve lost some time I’ve gotta make that back up.’ But yeah I try to stay fairly present and every now and then I’ll look up and check where the leaders are.

You said in the press conference and on the podium that you’re trying to show people that you work hard and you’re not just a kid with talent, can you talk about that? Is that something you’re hearing and you’re trying to correct? Why do you keep hinting that point?

I wanted to get that point out there, because I am so young, I definitely feel like I’m very lucky [with] my gift right now and how I can ride a bike. But I feel like most people mainly see me as a kid just with talent, more like a James Stewart, he came in with heaps of talent and that stuff. But I want to show that I just don’t ride my bike and not train, I put in the work as you guys see I’ve got a trainer in Johnny O’Mara and J-Mart will understand also that he’s a gnarly man. He still puts a whooping on us on the mountain bike. But I just want people to know that I’m not a slouch, I just don’t go and ride my bike and show up to the weekend and wish for the best. I put the time in and I make sure I do, so I can get results like this on the weekend.