A look back at his first 450 championship in Pro Motocross.

In what was arguably the strangest year in Motocross with the Coronavirus pandemic, Zach Osborne emerged as the 2020 Pro Motocross champion in the 450 class. In this edition of Rewind, we’ll relive his journey to the number one plate.

After a largely successful amateur career that saw him groomed for the pro ranks from a young age, he looked to be on the stereotypical path to the top of the sport. Osborne’s pro career, however, has been anything but normal.

The path taken was the one less traveled, heading to Europe for four years to race MXGP’s, eventually rekindling his passion for the sport. The lack of normalcy throughout his career makes his first premier class championship in Pro Motocross coming in 2020 only fitting. The Rockstar Energy Husqvarna rider came out firing as the gate dropped on the season at Loretta Lynn’s Ranch, a place where Osborne found himself atop the podium in many amateur national championship races from a young age. Now at age 30 and on the heels of his first 450SX win in Salt Lake City, Osborne scored back-to-back victories to open the season.

The opening round itself was a miraculous feat, with Osborne barely making a lap in qualifying after bike issues. Through all of that, he never doubted that he’d find himself at the podium by the end of the day.

“He decided right there and then when he was standing there working on his bike, not knowing if he was going to make it, I’m going to win this,” Red Bull KTM team manager Ian Harrison recalls. “I heard him tell Roger [DeCoster] a few times in the morning, ‘I’ll see you at the podium,’ and sure enough, there he was.”

The next stop on the calendar saw the series head to Ironman in Indiana, the first of only three times he’d find himself outside of the top three overall in the nine-round championship, taking fifth place with 7-3 finishes on the day.

At round four, he grabbed bounced back with convincing form, dominating both motos of the first of two rounds at the famed RedBud MX in Michigan.

“RedBud one was like the race you dream of your whole life,” Osborne explained. “I felt like at will I could stretch it out or manage the gap. There was no point during that day where I felt threatened.”

He’d rack up another podium at RedBud II, taking third on the day, but found himself with his lowest result at Spring Creek for round six. After taking fourth in the first moto, Osborne would ride the second moto with a flat front tire, finishing down in 16th as title rival Adam Cianciarulo (Monster Energy Kawasaki) took both motos to close the points gap to 15. 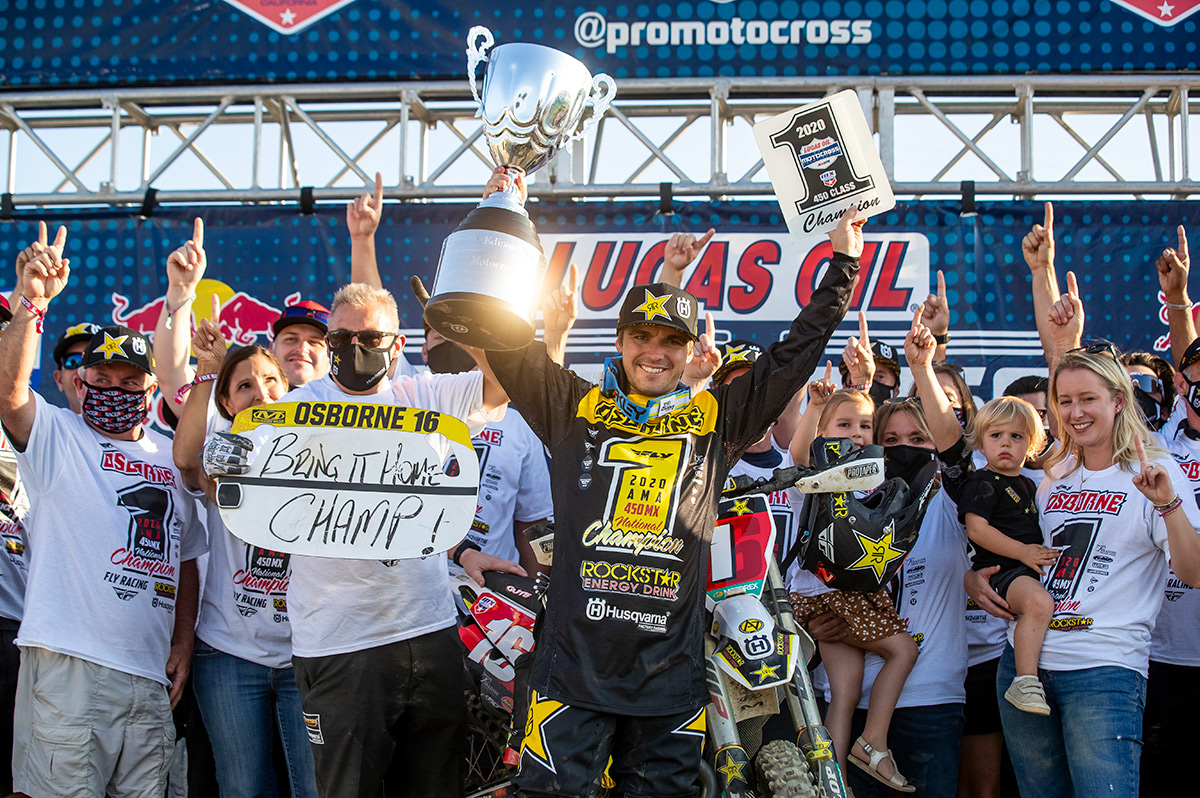 He rebounded to sweep the following round at WW Ranch, after going toe-to-toe in a thrilling first moto battle with Cianciarulo, who would eventually go 2-7 on the day. In the penultimate round, Osborne took third overall and headed to the final race of the season with a 24-point advantage.

With 50-points up for grabs on the day and two riders still mathematically in the championship hunt behind him, Osborne secured 5-7 moto scores on the day to secure his first premier class championship, becoming the oldest rider by two years to win the title, at age 31.

“I was impressed that Zach would stay in control of his emotions when things did not go his way,” explained Factory KTM’s Director of Motorsports Roger DeCoster, “When things looked pretty bad, you know he was able to pick it up and deliver.”

Osborne’s championship marked the first time Husqvarna had won a premier class motocross championship in the United States since 1976. He’ll look to defend that title when the gate drops on Saturday, 29 May for round one of the 2021 Lucas Oil Pro Motocross Championship at Fox Raceway.