Max Anstie’s rookie season in the premier class of Monster Energy Supercross was, from the perspective of many, one to write home about. The Englishman made every main event directly from the heat race and continued to progress to an eventual best finish of 12th place in one of the deepest fields of talent in recent memory. While satisfied with his first go at it, he’s hungry for more. To get the scoop on exactly how it went, we called him to get his take on the season and find out how he’s feeling just two weeks out from the Pro Motocross opener in this Five Questions feature. 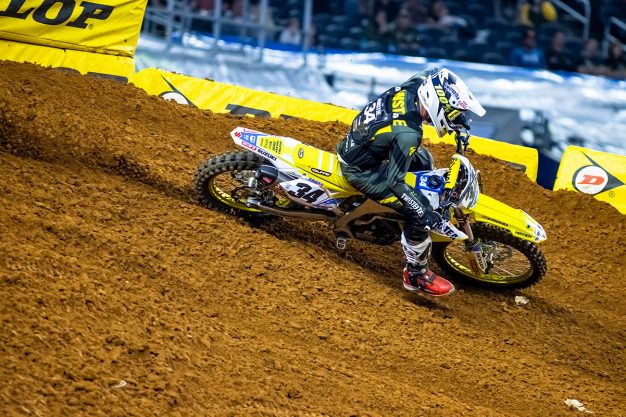 How was your first 450SX season from your perspective?

It was hard to know what to expect coming in honestly. I really felt like I was as ready as I could have been before round one, and then literally the day before I was supposed to fly I crashed at State Fair. It was the whole cliche thing, out before the season even starts but you know, for one reason or another I ended up going down and breaking a piece of my back and messing myself up. The issue was, it wasn’t too bad it, sounds worse than what it was, but I was only out for a few weeks. But because they did the three races in Indy and then three races in Houston, I missed seven rounds, whereas I actually only would have missed three rounds if it had been a normal year. So it kind of set me back straight away.

So coming into Orlando, I didn’t have any pressure with it because obviously, I had only done one or two days of riding. Then, on the other hand, I did, because I knew that I wanted to perform and also a lot of the teams and the people in the industry were kind of looking at me like, we know it’s going to be good at outdoors, he’s an outdoor guy, a GP guy, but can he ride supercross? So I kind of did feel like a little pressure there, but as far as expectations go, I didn’t really know. I could have gone in there and sucked, or I could have gone in there and done what I did. I had prepared as well as I could and when I went to the race I just didn’t think about it, all I thought about was trying to execute my plan and do my thing, and the first round in Orlando I was seriously rusty, both race rusty and learning.

But the way that I am, I wanted to be solid, I wanted to be consistent and I wanted to get my laps in because I need to learn. I need as much time on the track as possible, bar going to the LCQ’s. I needed to put myself in a position to be able to race and learn from the good guys, where I could get a good start and start figuring things out and I wasn’t putting up too much of a fight with some of them. Definitely, at the beginning of the season, I was slower in the whoops than the majority of the guys that I was around in that top 15 bunch. But again, that top 15, I mean even when I finished 12th in Salt Lake City, everyone that was in front of me has won races or won championships on 250s, and I’m just trying to jump in there and try to do the best I can. So as far as it goes with me being solid and consistent, I’m experienced with racing.

I might not be experienced with Supercross but I know how to handle myself out there and I know when I need to back it down. There were a few times this year I had a good 10, 12 minutes then I started getting sketchy in the whoops and it was like ‘okay, I’m not ready yet to really hang it out and I don’t want to end up laying on the concrete.’ When I want to just go back to the drawing board on the week and try to progress with that [finish] and make improvements and then come into the next weekend a little bit better, that was my mindset.

I’m pleased. I’m pleased with the way it went and pleased that I put the team in each main event and that was kind of their goal. I think we only had one main when we had all three of us in the main event so that was kind of cool. But as far as it goes from my perspective, being solid and being 12th at the last round, it’s great, it’s fine but I didn’t travel all the way around the world to do just that. This year, I wanted to learn but next year I’m going there to perform and mix it up with the top 10 group. That’s what I’m here for and if I didn’t feel like I could perform well then I wouldn’t be here, so that’s where I want to get to.

Do you feel like being where you’re at in your career, that your approach of learning helps?

No, it’s something I learned through the GPs. You know when I was a rookie in the 450 class in the GPs, I felt like there were a few guys – Gautier Paulin was one of them, he was my teammate, and Clement Desalle – it surprised me at just how solid they were, how literally every start they were in a good position, they made their lives easy. Every race you could count on them to get results. Sometimes they wouldn’t be the fastest guys on the track, you know Herlings or Cairoli or whatever would be faster, but they were always there or thereabouts. It was something I felt like I had to adopt for this year. In Europe it was slightly different, I was expected to perform well and I was expected to be a podium guy or top-five guy after the success that I had there. So you do have to step to that line, the limit of ‘I’m either going to get a good result or I’m going to be upside down,’ and sometimes you do end up upside down, so it’s finding that happy medium with it, the balance. For myself, this year I mentally could recognize that probably more in Supercross because I could recognize when I was getting sketchy because it was so new to me. What’s your biggest takeaway from this year that you can put toward next year for Supercross?

I know what I need to work on, obviously the whoops and there are a few other bits and pieces that I know what I need to work on within myself to improve. Of course, the bike and getting a little more comfortable set-up-wise, depending on whatever bike we’re on and however it all pans out. I guess the biggest takeaway is that okay, I can ride supercross and next year I’m going there to race and I’m not going there to just take part. So to be honest, I’ve got my feet wet, I know what I’m doing, I was solid enough to be in every main out of the heat race. People say that is an accomplishment in itself and I’m like ‘yeah okay, alright, I’ll use that,’ but I didn’t care about any race but the main event. I didn’t care about the heat race, didn’t care about qualifying practice or any of that. I’m there to race the main race and I’ll do what I need to do to put myself in a good position to do the best I can because the race is what pays points. What I can take away from it, is I’m excited about next year, because while I’m not inside the top 10 quite yet, I’m right there. When we started I’d never ridden supercross on a 450 and now I know what I need to work on to be better for next year.

Where are your goals at going into the Pro Motocross season?

Goals for outdoors – you know, obviously last year again I kind of took it like I did Supercross this year, I was learning I know it’s different in America with the tracks. For this year, the bike is the same, we’ve switched suspension from Ohlins to Showa, so I feel like that’s going to be a step in the right direction for us for outdoors. I feel like now I know what to expect I know a lot of the tracks, a few I haven’t been to, but I know a lot of them. So it’s just getting my work done and going and doing my job. We’ll see, I’ve got to do some more work with the bike, a bit more testing over the next week or so and we’ll go to Pala and we’ll let it have it and we’ll go race and we’ll see where we are. I’m definitely looking forward to it. I’m healthy at the moment, my body feels good, I feel like I got stronger throughout supercross and I feel like it’s put me in a good position come outdoors, and yeah, outdoors for me comes easy.

Is there a track you’re looking forward to going to the most?