The 20-year-old Spaniard shares his thoughts on a potential move to SX. 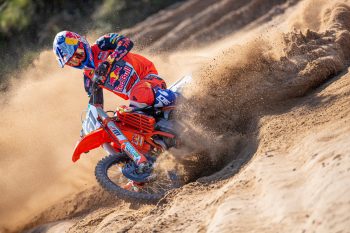 MXGP sensation Jorge Prado says that while his focus is fully set on the MXGP championship, he hasn’t ruled out having a go at Monster Energy Supercross somewhere down the line.

At just 20 years old, Prado’s career is really just getting into full swing as he’s set to line up for his second season in MXGP’s premier class.

The young Spaniard had been rumored to be heading to America at one point, but found a home with Red Bull KTM and is fully focused on MXGP. While he’s content where he’s at, he hasn’t ruled out taking his talents across the Atlantic to race Supercross.

“Honestly, I am really focused on doing very well and getting the title in MXGP and, watching supercross right now,” Prado explained. “I feel that it would be something very fun to try. It would be very different.

It would not be easy at all to go and get to a position to fight for a title. You not only need to get used to riding supercross at that level but also racing it. I’ve never raced supercross in my life. It would be very hard!

“I think if I did have the possibility to get there and race then I will want to go, and I would want results. Right now, I’m looking only at MXGP.”

After notching back-to-back championships in MX2, his 2020 season was plagued with injury alongside a Covid-19 diagnosis that forced him to miss multiple rounds. When all was said and done, he wrapped up his rookie MXGP season sixth overall.

“Yeah, 2020 was one of the hardest of my career. I moved to the 450 class as the 250 champion and with high expectations, at least for myself,” he continued. I was expecting good results and the injury threw me a bit.

“The 450 is a very nice bike to ride but if you need to push it for the whole 30 minute plus two laps moto then it is not very easy. You have to be really ready for that. It’s not easy to ride those bikes fast for a long time; you really need good physical condition.”

The MXGP is set to kick off on 16 June with the first round taking place in Orlyonok, Russia.