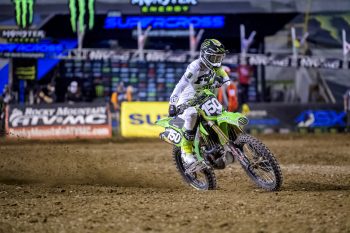 Carrying momentum from his first career win one week ago, Shimoda started the season’s final race by setting the fastest lap time in free practice for the 250SX Eastern Regional riders. The Japanese native then took his speed to timed qualifying and clocked the third fastest overall time in the Eastern Regional session. His teammates, Hammaker and McAdoo, qualified in second and fourth overall in their 250SX Western Regional session.

In the opening lap of the 250SX Western Regional Heat, the Kawasaki duo ran up front with McAdoo in second and Hammaker in fourth. The No. 31 KX™250 machine immediately began battling for the lead, pressuring the leader until he was able to put his Kawasaki in front and ran away with the heat win. Fellow Monster Energy/Pro Circuit/Kawasaki rider Hammaker rode a steady race and crossed the finish line in fourth. As the gate dropped on the 250SX Eastern Regional Heat, Shimoda rocketed out to a second-place start. The No. 30 machine battled to stay in second throughout the race before dropping into third to finish strong for the main event.

When the gate dropped for the 250SX East/West Showdown and the final 250SX Main Event of 2021, it was the rookie sensation Hammaker who again got off to a great start, coming around the first turn in second place. Fellow Kawasaki riders McAdoo and Shimoda were further back, sitting in fifth and 10th place. Following the difficult trials McAdoo had faced this season, he was looking to finish the season strong and put his head down and began to charge through the field. Just as he looked to be on his way to a podium finish, McAdoo conceded third position on the last lap and crossed the line in fourth. Facing the top 250SX Eastern Regional riders for the first time, Hammaker held onto second place for as long as possible and ended up finishing in fifth, with fellow Team Green teammate Shimoda overcoming a mid-pack start to finish in sixth place.

“We didn’t finish where we wanted to in the race, but it was still a good day overall. My KX250 was hooking up well and I felt like my riding was improving throughout the night. I qualified fourth overall and then went on to win my heat race. Heading into the main event, I felt like momentum was on my side, but as I began making my way towards the front, minor mistakes in the rhythm sections ended up costing me the podium finish and second overall in the points. It’s a tough pill to swallow, but I have a great team behind me, and we’ll be ready to take on the outdoor season in full force.” – Cameron McAdoo

“I felt great aboard my KX250 all day today. My riding was consistently on pace with the top guys in practice and the heat. I believe I got out to a second-place start in both the heat and main today, which is always a positive. This has been an incredible rookie season so far and to be recognized as the 250SX Rookie of the Year is an absolute honor. I want to thank the entire Monster Energy/Pro Circuit/Kawasaki team for sticking by my side. Without all of their constant help, none of this would be possible.” – Seth Hammaker

“The morning got started on a solid note. I was fastest in the 250SX East free practice session and held pole position in the first qualifying session for a moment too, which was awesome. I know I have the speed to compete with the lead riders and I would’ve loved to be battling with the top-3 guys in the main event, but a poor start forced me to work my way through the pack. I still managed to finish high enough in the race to maintain second overall in the 250SX East points standings, which was the goal for today. Thank you to everyone on the Monster Energy/Pro Circuit/Kawasaki team for believing in me and supporting me this entire season. Time to rest a little and get ready for the outdoor season.” – Jo Shimoda

Monster Energy Kawasaki rider Tomac kicked off Saturday by setting the fastest lap time in the 450SX free practice. Looking comfortable aboard his KX™450, the Colorado native was one of the fastest during both 450SX qualifying sessions and the No. 1 Kawasaki would qualify fourth overall.

Tomac executed an outstanding start in 450SX Heat 1, taking the holeshot and immediately beginning to pull away. The No. 1 faced zero pressure during the heat race and went on to win the race in dominating fashion.

As the gate dropped on the 450SX Main Event at Rice-Eccles Stadium, Tomac got off to a mid-pack start and came out the first turn just outside the top-10. A determined Tomac then began stringing laps together and gradually picked off the riders in front of him. By Lap 10, Tomac had made his way up to 12th. With less than half the race left to go, Tomac made another push towards the front and made his way up to ninth, where he finished the race.

The ninth-place finish adds another top-10 to Tomac’s impressive race resume and secured his third position in the overall 450SX championship points standings.

“The track was a lot slicker in the morning than it seemed, but it got a lot better as the day went on. I got off to a good start in my heat race which ultimately helped me run away with the win and gave me loads of confidence going into the main event. Unfortunately, I didn’t get the best start in the main and was cut off by the riders up front, forcing me to have to battle my way through the pack. Although winning is always the goal, I’m very proud to walk away with third overall in the 450SX championship standings and I am looking forward to the first outdoor race at Pala, California.” – Eli Tomac