Top 10: Races of the Supercross season

Recounting our favorite main events of the 2021 championship.

The 2021 Monster Energy Supercross season is in the rearview mirror and it featured a 450SX class that was arguably more stacked than we’d ever seen and had both 250SX championships coming down to the final round. With so much incredible racing, we thought it’d only be fitting to take a look back at our Top 10 favorite main events from the 2021 season, in chronological order. 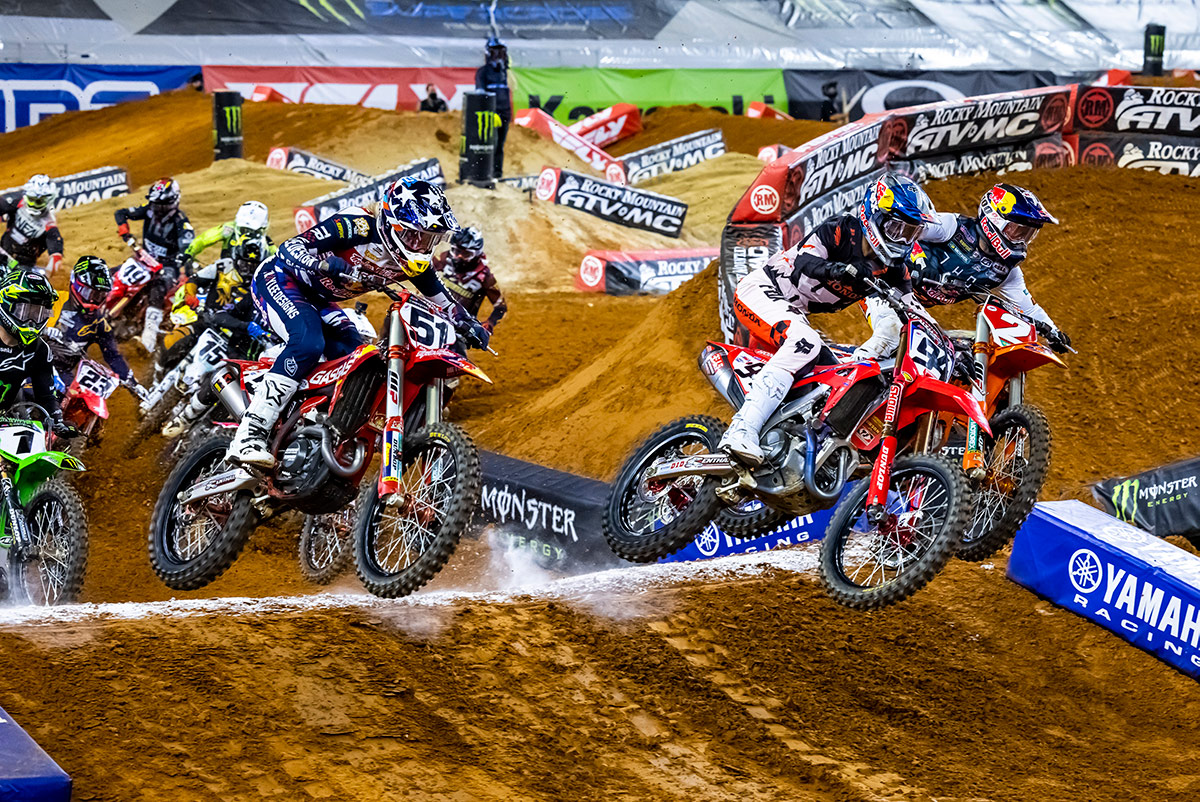 1. Houston 1:
In the much-anticipated return of the series, it was Justin Barcia taking the win in his first ride aboard the TLD Red Bull GasGas MC 450F in the teams first outing with the new bike. Before the season kicked off, Barcia and the Red Bull crew put together a video that saw him jumping a freestyle ramp in an empty Anaheim stadium, with the claim that he’d won the Anaheim opener for the third season in a row. While it wasn’t in Anaheim, their dream became reality as Barcia crushed in at the opening main event to grab the win in Houston. Another notable performace on the night was that of Marvin Musquin (Red Bull KTM), who returned to the Supercross podium after having not lined up for a 450SX main event in 623 days.

2. Houston 2:
This race produced a podium that absolutely no one could have predicted. While Eli Tomac in the top spot aboard his Monster Energy Kawasaki came as no surprise to anyone, it was 450SX rookie Dylan Ferrandis taking second place in just his second premier class main event that was the real shock. As if that wasn’t enough, Muc-Off Honda’s Justin Brayton found his way onto the podium with a third  place that came as a shock to many. Brayton had incredible pace that night but it wasn’t long before injury put his season on hold on more than one occassion. On that same night, Team Honda HRC’s 17-year-old phenom grabbed his career-first Monster Energy Supercross win, proving to himself and everyone else that he was ready to fight at the front of the field.

3. Arlington 2:
The 250SX West class delivered what was likely the most emotionally charged podium of the season. At the front it was Huner Lawrence taking his first win and collapsing following the race as it all sank in that he’d overcome a difficult off-season with a massive change to his program. From injury recovery, a reconstructed diet and training program, Hunter left nothing on the table and it all paid off in Arlington as he crossed the line first. That wasn’t all the class had to deliver though, as Jalek Swoll took his career first podium aboard his Rockstar Energy Husqvarna in second. Swoll’s breakout podium instilled confidence that could be seen throughout the rest of the season as he challeneged for top fives and podiums all season long. Third that night went to Phoenix Honda’s Kyle Peters. Peters was fresh off a 20-0 record that brought him a championship in the Kicker Arenacross series, his momentum clearly carrying over to bring him to the third podium of his career.

4. Arlington 3:
The final stop at the Arlington residency gave us the battle we’d all been waiting for, as all four championship contenders rounded the first corner inside the top five and ready to battle. Not only that, but we Webb’s performance was one that might have been a turning point in the championship. After getting caught, passed and left in the dust by both Roczen and his rookie teammate Chase Sexton in the heat race, it looked like Webb might be in real trouble come main event time. It didn’t look any better as the gate dropped either, Roczen grabbed the lead and got out to a decent lead early in the race, with Webb in second. Tomac pressured Webb and the duo caught Roczen around halfway, the three of them then engaged in battle. In the end, Webb came out on top as he denied Roczen’s late race push en route to sweeping the Arlington residency. Ricky Carmichael later commented that he ‘expected third to fourth at best’ out of Webb following his dismal heat race.

5. Daytona:
There are times in this sport when fan favorites pop up almost out of nowhere, this was one of those times. Multi-time 250 class champion Aaron Plessinger finally notched his breakout 450SX ride and captured the hearts of many with his ‘Do it for Dale’ statement at the end of his podium speech paying homage to Nascar legend Dale Earnhardt. From that point forward the only riders to rival him in crowd noise when they appear have been the Lawrence brothers. The race itself was an incredible ride by Plessinger though. While he didn’t get the win, he kept Tomac honest as Tomac rallied to his fifth Daytona win to tie Carmichael for all-time wins at Daytona, an impressive feat in itself. Plessinger finished the season fifth overall and it was this night that gave him the confidence and momentum needed to do so. 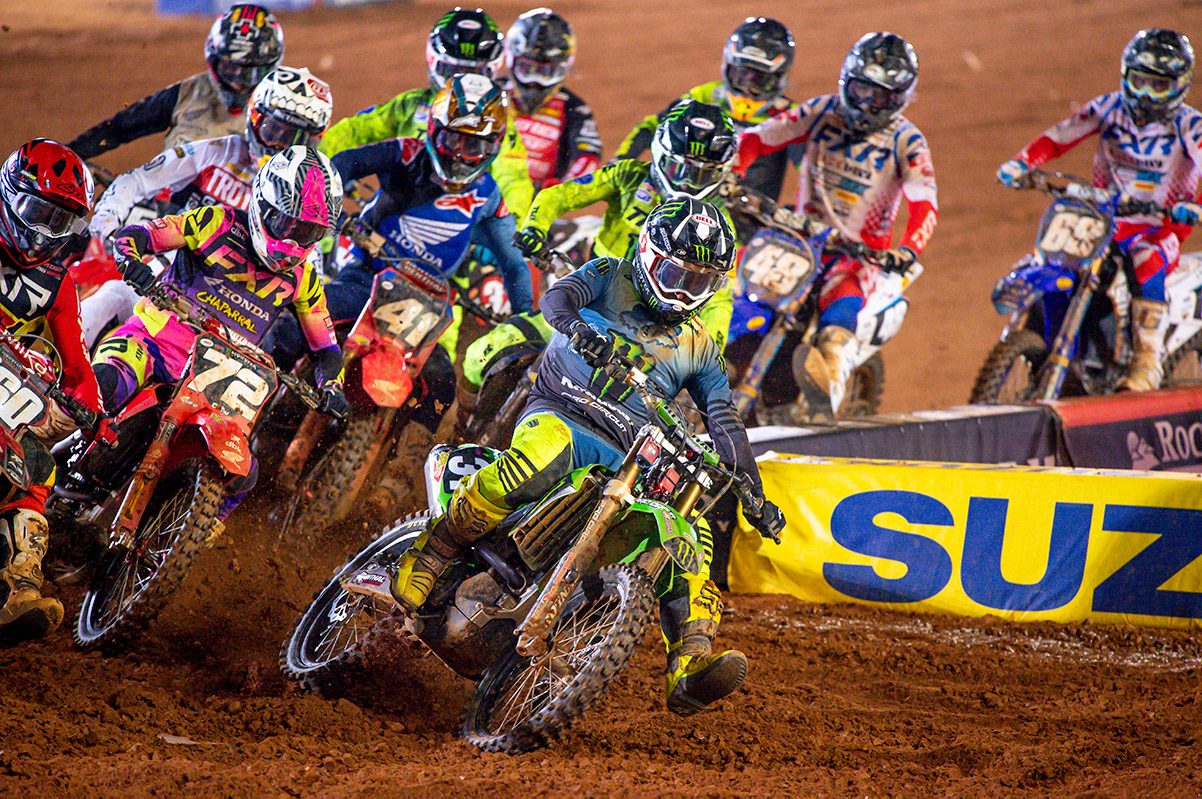 6. Atlanta 1:
The first of a highly entertaining residency at a brand new venue in Atlanta Motor Speedway saw an epic main event unfold in the 450SX class. Plessinger jumped out to a lead early and was absolutetly flying out front, looking poised for his first premier class main event win. As he dialed back the speed to maintain his lead, he lost the front end and subsequently his shot at the win on the night. This handed Honda’s rookie standout Sexton the lea and it looked like the pieces of the puzzle were finally going to come together for his maiden win. In the second to last lap, Tomac had closed the gap though, and following a blunder with a lapped rider that let Tomac by, Sexton thought the race was over and Tomac cruised to the win. While the last lap wasn’t all too exciting, it was none the less a thrilling main event under the speedway lights.

7. Atlanta 2:
You might remember this night? The night we learned that Cameron McAdoo (Monster Energy Pro Circuit Kawasaki) is either made of rubber or is an actual spawn of something from a Terminator movie. He hit the ground in what was without question the biggest crash of the year, only to return to take a podium with a third place finish. His grit and determination was on full display, caught on a hot mic during the PeacockTV commercial break pleading with medical staff to let him continue racing as he was in contention for the championship against eventual champion Justin Cooper (Monster Energy Star Racing Yamaha). It was the only time this year that the 250SX class was so action packed that between races all we could do was catch our breath and think ‘there’s still another race tonight?’

8. Atlanta 3:
This, in our opinion, might have been the race that sealed the deal in the 450SX championship for Webb. Roczen had grabbed the holeshot and completely decimated the field in the early stages of this race, opening up a lead of over 10 seconds with just a few minutes on the clock. Just then, he hit the ground at the exit of the whoop section in a rare mistake. While he remounted quickly and maintained the lead, it brought him into the clutches of a charging Webb, who would later be described by his team manager Ian Harrison as ‘a shark that smelled blood in the water’, as he went on to catch, pass and gap Roczen by over two seconds with just two laps to go. Webb bobbled a bit in the closing lap, but it was all him in the end taking a statement win and walking away from a slightly rough residency in Atlanta with a win in the end.

9. Salt Lake City 1:
The penultimate round was one for the books in Salt Lake City, with an absolutely exctatic Musquin taking a win just ahead of his teammate Webb in a KTM 1-2. Musquin’s return to the top step of the podium was a welcomed site after an up and down season saw him struggle hard throughout the middle part of the year. Webb’s rally for the championship continued as Roczen made another critical mistake while leading, eventually finishing sixth place on the night, creating a 22-point gap in the championship. Perhaps the biggest smile of the year was produced by third place finisher Malcolm Stewart as he grabbed his long-awaited, career-first 450SX podium. The podium excitement was alive and well in the 250SX East class as well, as Jo Shimoda grabbed the first 250SX win of his young career in a wire-to-wire victory that saw him handle pressure like a seasoned veteran at the front, to become the first Japanese rider to win a Supercross main event.

10. Salt Lake City 2:
Aside from all three champions being crowned on the same night, the feel good story of the final round had to be the Lawrence brothers becoming the first brothers to share a Supercross podium in the Dave Coombs Sr. 250SX Showdown. Jett took the win while older brother Hunter battled hard to come back from a tip over that dropped him to fifth at one point. Hunter’s last lap was one of the more exciting to watch of the season as he set out to pass McAdoo for third, doing so with just half a lap left, then rolling on to ghost ride his bike as he pulled up to share the moment with his kid brother. In 450SX action, Webb charged for another victory on a night when all he had to do was finish 19th or better if Roczen won. It was a sign of just how bad he wants to win and an emphatic statement to cap off his championship season. The KTM boys celebrated big, not just for Webb but Musquin’s second place ride as well, giving the Austrian manufactuerer back-to-back 1-2 finishes in the premier class to finish the season.