Direct updates from round 17 of the season in Rice-Eccles Stadium.

Follow the final round of the 2021 Monster Energy Supercross Championship with direct updates from Rice-Eccles Stadium in Salt Lake City through Racefeed. 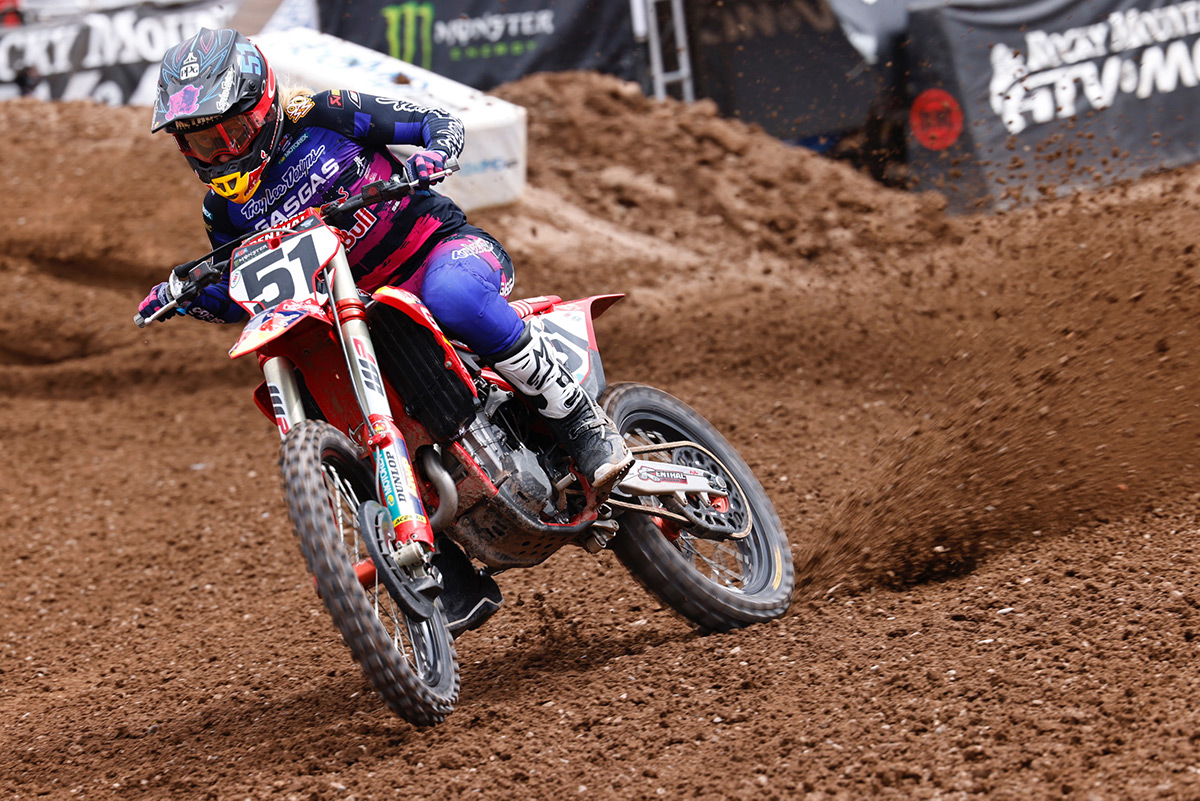 250SX Showdown qualifying:
After all was said and done in the final 250SX qualifying sessions of the year it was Justin Cooper (Monster Energy Star Racing Yamaha) taking the top spot in combined East and West times ahead of tonight’s Dave Coombs Sr. 250SX Showdown. His 41.864s lap put him nearly a half second ahead of rookie Seth Hammaker (Monster Energy Pro Circuit Kawasaki) who clocked a 42.437s lap for second place. Jett Lawrence (Team Honda HRC) took third ahead of his older brother and teammate Hunter in fourth. Fifth place and first rider in the 43s range was Cameron McAdoo (Monster Energy Pro Circuit Kawaski) with Michael Mosiman (TLD Red Bull GasGas) in sixth place after leading much of the second session. Mitchell Harrison put his Muc-Off Honda in seventh place over all in the team’s return to action, as a tie for the eight spot saw Jalek Swoll (Rockstar Energy Husqvarna) and Garrett Marchbanks (ClubMX Yamaha) with their 43.153s laps. The final spot in the top 10 went to last week’s winner Jo Shimoda (Monster Energy Pro Circuit Kawasaki) and championship points leader Colt Nichols (Monster Energy Star Racing Yamaha) ended up 11th overall.

450SX qualifying:
In the final 450SX qualifying session of the season, it was Chase Sexton laying down the fastest lap of the day in the first qualifying session to top the timesheets with a 41.706s lap. Second place went to Sexton’s teammate Ken Roczen who topped the second session of the day, ahead of Jason Anderson (Rockstar Energy Husqvarna). Fourth went to Eli Tomac (Monster Energy Kawasaki) ahead of red-plate holder Cooper Webb (Red Bull KTM) as he looks to take home his second championship this evening. Sixth was third-place finisher from last weekend Malcolm Stewart (Monster Energy Star Racing Yamaha) just ahead of teammate and newly crowned 450SX rookie of the year Dylan Ferrandis in seventh. The eight spot went to last week’s winner Marvin Musquin (Red Bull KTM) with Justin Barcia (TLD Red Bull GasGas) in ninth. The final spot in the top 10 went to Rocky Mountain ATV/MC KTM’s Joey Savatgy.

250SX West heat 1:
Holeshot went to Hunter Lawrence, making a quick block pass on Justin Cooper letting Swoll escape with the lead. After turn two, it was all Swoll ahead of McAdoo, Lawrence, and Hammaker. McAdoo and Swoll traded passes, allows hunter back by as Lopes takes fifth. Swoll and Lawrence back and forth. McAdoo sets up Lawrence and allows Hammaker by, Lawrence gets him back moments later. All the while Swoll got out to nearly a one-second lead momentarily as McAdoo set out after him. McAdoo passed Swoll for two sections, but Swoll jumped back by in the following rhythm lane, allowing Lawrence to close in and bringing Marchbanks with him. Lawrence got around Swoll, and set out after McAdoo on the final lap, as Marchbanks cases a jump allowing Hammaker back by. In the end, it was McAdoo over Lawrence, Swoll, Hammaker, and Marchbanks in the top five. Brown took sixth with Kyle Peters (Phoenix Honda) in seventh. Cooper recovered to eighth place, with Frye rounding out the final qualifying positions.

250SX West heat 2:
The holeshot went to Mosiman with Geran Stapleton (Honda), Shimoda, Thomas Do (KTM), Josh Osby (Honda) and Jett Lawrence out of turn one. Mosiman checked out early as Shimoda passed Stapleton for second. Lawrence followed suit quickly, passing Stapleton in the whoops in the following lap. Nichols worked his way into fourth and set out after Lawrence and Shimoda ahead of him. Out front with two minutes to go, Mosiman had gapped the field by over six seconds, lapping over a second faster. Lawrence got by Shimoda through the whoops, but Shimoda stayed glued to his rear wheel as Nichols began to reel in the duo. Lawrence was able to gap Shimoda as they began to reel in Mosiman a bit, but it was all Mosiman taking the win ahead of Lawrence, Shimoda, Nichols, and Do in the top five. While Osby, Stapleton, Logan Karnow (Kawasaki), and Joshua Varize(KTM) rounded out the transfer positions.

450SX heat 1:
Marvin Musquin got the jump but Tomac got the holeshot from Musquin, Roczen, Stewart, and Justin Starling. Roczen made an aggressive pass on Musquin in the second corner of lap two, allowing Stewart to sneak by Musquin as well. Max Anstie (Twisted Tea HEP Suzuki) took control of fifth as Starling dropped down the order, with Broc Tickle (MotoConcepts Honda) and Savatgy just behind him. With three minutes to go, Tomac had a two-second lead over Roczen, with a similar gap back to Stewart in third. Savatgy and Tickle worked their way past Anstie and the trio maintained a gap to each other. Out front, Tomac cruised to a heat race win ahead of Roczen, Stewart, Musquin and Savatgy in the top five. The final transfer spots of the night went to Tickle, Anstie, Benny Bloss (MotoConcepts Honda) and Kyle Chisholm (Yamaha).

450SX heat 2:
Jason Anderson grabbed the holeshot with Webb, Plessinger, Barcia Sexton, and Ferrandis in tow. You could throw a blanket over the top six in the opening three laps with no one really making a move. Webb began to pressure Anderson with three minutes to go, as the two put a few bike lengths between themselves and Plessinger. Sexton then began to pressure Barcia, and made a big move up the inside but it didn’t stick, allowing Ferrandis to close in. Sexton made a move again in the same corner, getting by but Barcia got by and Ferrandis worked past Sexton as well. A Lap later Sexton got him back and went back after Barcia. In the end, Anderson took the win over Webb, Plessinger, Barcia, Sexton, and Ferrandis who were separated by 2.5s in the end. Seventh went to Dean Wilson (Rockstar Energy Husqvarna) with Tyler Bowers (Kawasaki) and Fredrik Noren (Kawasaki) taking the final transfer spots.

250SX West LCQ:
The holeshot went to Hunter Schlosser (Yamaha), Cedric Soubeyras (GasGas), RJ Wageman (Yamaha) Luke Neese (Kawasaki) and Coty Schock (FXR Chapparal Honda). The top three settled in and the battle ensued behind them for the final spot between Enzo Lopes (Phoneix Honda) and Schock. Wageman and Schlosser hit the ground along with Neese, handing second place to Lopes with Schock in third, while Dilan Schwartz took over the final transfer spot. Soubeyras began to check out, but hit the deck with one minute to go, dropping him to fourth. Schwartz and Schock battled for second, while Harrison closed in on Soubeyras for the final transfer spot until Harrison hit the ground. In the end, it was Lopes, Schwartz, Schock, and Neese taking the final transfer spot.

450SX LCQ:
The holeshot went to Justin Rodbell (Kawasaki) Joan Cros (Kawasaki)  Starling, and Theodore Pauli (Kawasaki). After a lap, Rodbell hit the ground as Cros settled into the lead ahead of Starling, Ray and Pauli with Cade Clason (Kawasaki) in the five spot. Starling took the lead, gapping the field with two minutes to go. Clason made a slick pass on Pauli for the transfer spot on Pauli with just under two minutes on the clock. At the checkered flag, it was Starling, Ray, Cros and Clason punching their tickets to the main event.

250SX West main event:
The final 250SX holeshot of the year went to Nichols over Hammaker, Jett Lawrence, Hunter Lawrence, and McAdoo. Cooper started in eighth, with Mosiman hitting the ground in a first turn pile up. The top three maintained positions as Nichols had nearly a two-second lead with 12 minutes to go. Swoll, Brown, and Shimoda began to battle for sixth place, with Cooper dropping to ninth. Jett made a huge move around the outside after the whoops section for second place on Hammaker, allowing Hunter to close in as well with McAdoo just behind. Hunter then attempted a pass up the inside of Hammaker in the following lap, sliding out as he hit the rut and dropping to fifth. Jett then began to take some time out of Nichols out front as he charged toward the lead. With five minutes to go, Jett’s charge continued closing within one second of the leader. McAdoo then made a pass on Hammaker for third, allowing Hunter to close on the Pro Circuit duo and eventually make a pass on Hammaker. Jett closed on Nichols and made a pass through the whoops with no contest from Nichols who had one hand on the championship. Hunter then began to charge, catching McAdoo with two and a half minutes to go. Hunter caught him on the final lap, making the pass with half a lap to go. Out front, it was all Jett taking the win over Nichols with Hunter rounding out the top three. Fourth went to McAdoo with Hammaker in fifth place ahead of Shimoda in sixth. Brown finished seventh with Swoll, Cooper, and Peters taking the final spots in the top 10. Nichols and Cooper grabbed the championships respectively.

450SX main event:
Roczen grabbed the lead with Musquin, Webb, Sexton, and Plessinger in the top five. Webb moved into second, ahead of Musquin as they settled into lap one. Webb began to pressure Roczen as Sexton charged past Musquin and toward the lead duo. Roczen checked up Webb allowing Musquin by Sexton and the pack closed in behind. Sexton got back around Musquin and began to pressure Webb while Roczen got out to a few bike-length lead. Sexton used an incredible drive to get around the outside of Webb and into second. Deeper in the pack, Anderson found himself in a battle with Stewart, Savatgy, and Barcia for seventh. Sexton made the move on Roczen for the lead with 14 minutes left on the clock. Anderson dropped down the order after pulling off the track and heading to the pit. Musquin closed on Webb as the duo caught the back of Roczen for second place with 11 minutes to go. Webb made an aggressive move on Roczen, allowing Musquin by as well. Meanwhile, Sexton had a four-second lead out front as Webb set out after him with six minutes to go. Roczen dropped down the order, losing spots quickly to all three Star Racing Yamaha’s just two laps later. Sexton bobbled with four minutes to go, allowing Webb by and Musquin to catch the back of the leading duo. Roczen continued to slip backward, dropping to 10th with two laps to go, as Musquin got around Sexton for second place. In the end, it was all Webb, taking the win and the 2021 450SX championship, with Musquin and Sexton rounding out the podium.