Seven key aspects to follow at this weekend's finals in Salt Lake City.

After 16 captivating rounds of intense racing, the 2021 Monster Energy Supercross Championship ultimately comes down to this, the final round at Salt Lake City, this weekend. In this Countdown, we highlight the key storylines and things to keep an eye on as the season draws to a close. 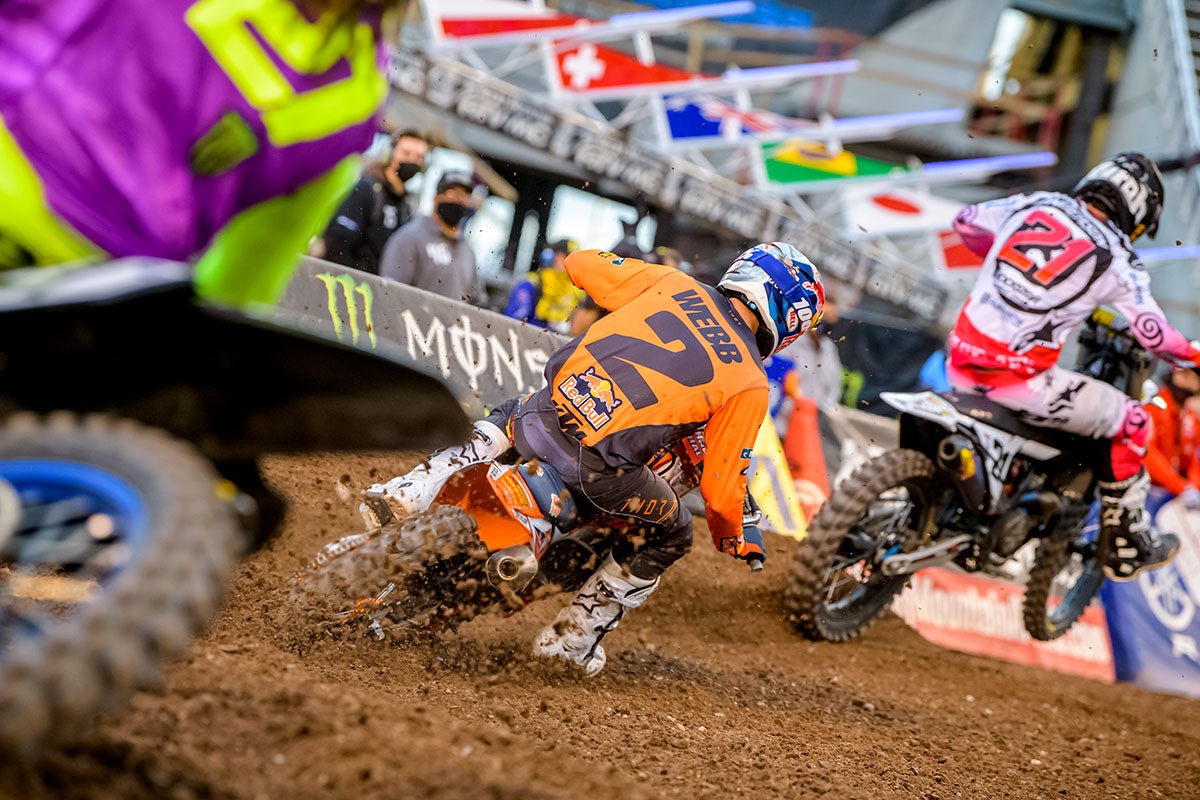 7. Star Racing showdown:
The season-ending 250SX East-West Showdown is always a crowd favourite, but the Monster Energy Star Racing Yamaha team has a lot of skin in the game this year. Two of the team’s racers, Colt Nichols and Justin Cooper, are comfortably leading their regions respectively and it will be interesting to see if they tip-toe around each other if they meet on the track. At the same time, rookie Nate Thrasher burst onto the scene in Atlanta with two wins, so there will be plenty of eyes watching to see whether he tries to spoil the Showdown party or plays any sort of supporting act to help his team-mates win their titles.

6. Last chance for a first-time winner:
With five different main event winners already this year, the 450SX championship has been an spectacular, but it has lacked a first time winner and this final round is the last chance to see a new face ‘light the candles’. Team Honda HRC’s Chase Sexton has looked the most promising with two runner-ups and five top five results, but Monster Energy Star Racing Yamaha’s Aaron Plessinger has also come into his own in the back half of the season. Meanwhile, two of Plessinger’s team-mates, Dylan Ferrandis and Malcolm Stewart, have also graced the podium this year and could find themselves on the top spot if the cards fall their way.

5. McAdoo’s fight for pride:
Monster Energy Pro Circuit Kawasaki’s Cameron McAdoo made headlines and won a legion of fans with a string of wild crashes during the three rounds at Atlanta that left him battered, bruised and essentially out of the 250SX West title fight. While the championship is now out of reach for the rider who held the red plate earlier in the season, there is still plenty to fight for this weekend. Only two points separate him and second-placed Australian Hunter Lawrence (Team Honda HRC), so after having two weeks rest to let the bruising ease, McAdoo should be ready to fight for pride and the runner-up.

4. Tomac to finish strong:
Defending champion Eli Tomac’s disappointing 10th-place finish last weekend was out of the ordinary for the Monster Energy Kawasaki racer. Not only was it his worst result since the opening around at Houston where he finished in P13, it was the worst Salt Lake City performance of his career. SLC is usually a happy hunting ground for Tomac and last year he didn’t finish any lower than fifth during the seven-race residency on his way to claiming the elusive 450SX championship. After Salt Lake City 1, the 2021 title is now out of reach, but expect the Colorado native to try and finish the season on a high note in his last ride with the number one plate. 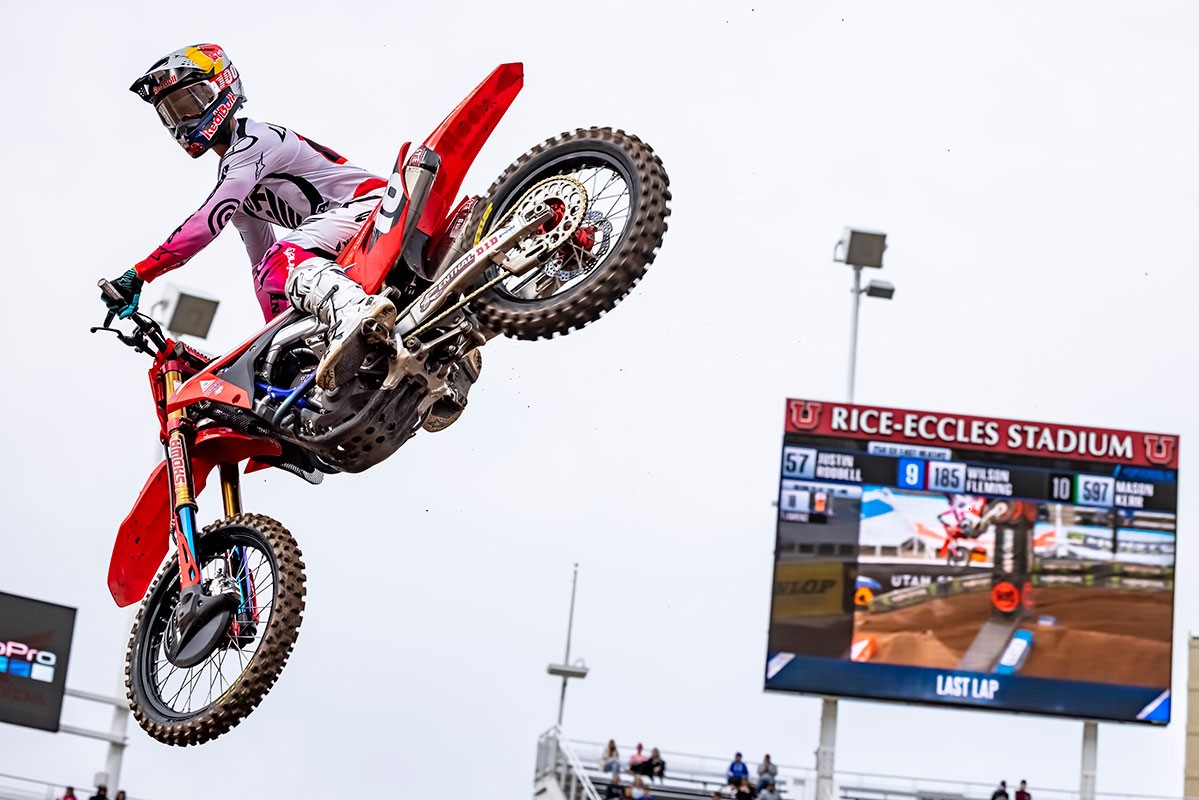 3. Titles on the line::
Only just! After more ups and downs than a theme park roller-coaster, we’ve arrived at the final round with all three Supercross championships still on the line. In reality, though, it’s going to take some monumental plot twists for the titles to not fall the way of the championship leaders. Red Bull KTM Factory Racing’s 2019 champion Cooper Webb has one hand on the trophy with a 22-point lead over early red-plate holder Ken Roczen (Team Honda HRC). Similarly, Justin Cooper holds a comfortable 20-point buffer over Hunter Lawrence and Colt Nichols now enjoys a 23-point margin over Monster Energy Pro Circuit Kawasaki’s Jo Shimoda. Of course anything can happen, but as long as each of these guys finish with a handful of points, the titles are theirs.

2. Cooper Webb vs Ken Roczen:
It’s been the topic of the season and, while there’ve been plenty of on-track encounters between the two title contenders, it’s becoming increasingly obvious that Cooper Webb has the upper-hand over Ken Roczen. They both have equal physical strength and endurance, but it seems to be the mental, psychological game where Webb has gained the advantage. The past two rounds have seen Roczen make uncharacteristic errors while holding a handy lead, which has allowed Webb to smell blood in the water and charge past to victory. With the final now upon us, it’ll be fascinating to see if they find each other on the track – how safe will Webb play it and how aggressive will Roczen be with nothing to lose and everything to gain?

1. Lawrence brothers do battle:
We’ve seen them on-track together for a few rounds at Salt Lake City last year, but this time around, both Jett and Hunter Lawrence are carrying fine form into the Monster Energy Supercross 250SX Showdown. The two Team Honda HRC riders have raced different coasts this year, so until now, everything that’s been said about who is faster in 2021 has been speculation. Barring disaster, both are likely to sit on the podium in their respective championships and each have won main events this year (Jett has two and Hunter has one). Jett has a bunch of raw speed and talent, while the older Hunter has a smoother, more measured approach that translates into deceptively quick race pace. It could be a heck of a spectacle!