‘Focusing on preparing for my title defense’ – Osborne 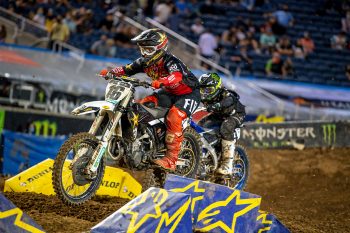 Osborne’s recent struggles with a bulging disc in his lumbar spine have finally come to an end. The injury was sustained at the practice track just before Orlando 2, where he’d race through the pain to an eventual eighth-place finish.

Following his top-10 performance, he announced he’d miss Daytona and has yet to line up for a Supercross since. After focusing on recovery, Osborne broke news that he’s back on the bike without pain and preparing for the Pro Motocross opener.

“Enjoyed being back and enjoyed not being in pain while riding for the first time in a bit,” Osborne explained. “It’s been a winding road to get back to riding and feeling good.

“With that said I won’t be doing any more Supercross races, but focusing on preparing for my title defense in Pro Motocross. Thanks to everyone who has had my back literally and metaphorically through this process.”

Osborne will have ample time to prepare before the Lucas Oil Pro Motocross season kicks off on 29 May at Fox Raceway in Southern California.