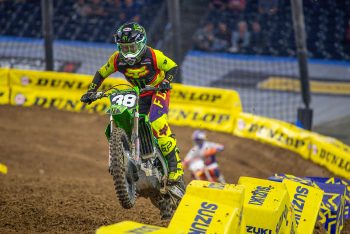 After qualifying crash and subsequent collarbone surgery sidelined him at Houston 3, Austin Forkner has announced he will not return for the final rounds of the 250SX East championship.

In his sixth season in the pro ranks, the Monster Energy Pro Circuit rider was a favorite for the 250SX East crown as the 2021 Monster Energy Supercross series kicked off in Houston.

After taking second in the opening round and a sixth on the first ‘Super Tuesday’ of the year at the Houston residency, Forkner’s crash in qualifying practice at Houston 3 put a halt to his bid for the championship.

It was immediately apparent that the Oklahoma native was dealing with a shoulder injury and was later revealed he would have surgery immediately to plate the broken collarbone sustained in the crash.

While many thought he would return for the last few races of the season, Forkner and his team have decided to instead focus on preparing for the upcoming Lucas Oil Pro Motocross season.

The announcement comes on the same day Monster Energy Kawasaki 450 rider Adam Cianciarulo broke the news of his decision to also sit out the remaining Supercross rounds to prepare for the great outdoors.