Recovered from ankle injury and ready to race. 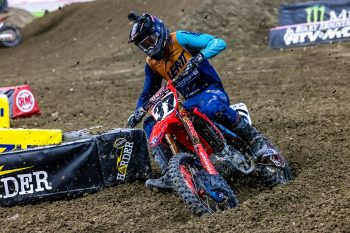 Benny Bloss will return to action this weekend in Atlanta following a crash that sidelined him for the previous two rounds in Arlington, the MotoConcepts rider recently stating starts will be a key to his success going forward.

With a best finish of 13th so far in the 2021 Monster Energy Supercross season, Bloss’ 450SX campaign has been marred by bad luck. Aside from luck, he says bad starts have been the main issue plaguing him this season.

“I’ve had kind of a string of bad luck,” Bloss explained. “Some crashes and then [at Arlington 1] I got something stuck in my sprocket and so it was kind of making the bike weird and I didn’t want to take any chances with it.

“I’m really struggling with my starts. I’ve tried pretty much everything. From first gear starts, second gear, different ways, foot up, foot down, that’s been a really bad part for me.

This week [Arlington 1] I started dead last and it’s just with the level of competition that we have this year in the 450 class, you’re not going to come from last to 10th, there’s just too many good guys.

“I think if I could just get my starts down it would be a kit easier to me, I feel like I’ve had some good speed it’s just I need to start up there.”

Injury following a qualifying crash cut his time in Arlington short, but the recent three-week break in the Supercross series has allowed him to recover, as he aims to line up for round 13 this Saturday at Atlanta Motor Speedway.

Apart from racing, Bloss and his wife recently welcomed their first child ahead of Arlington 1, something he says is one of the coolest experiences of his life so far.

“He came on Tuesday morning,” he said, “and we didn’t get out of the hospital until Thursday, so my sleep wasn’t exactly ideal headed into the weekend.

“It’s probably the coolest experience I’ve ever had in my life and it’s just super, super exciting.”