The British rider chats about his rookie 450SX season. 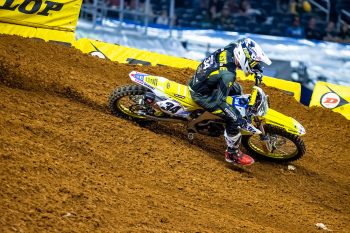 Twisted Tea HEP Suzuki rider Max Anstie shared his thoughts on how his debut season in the 450SX class is going in a recent Supercross round table, discussing the trials and tribulations of coming from MXGP’s to Supercross.

Anstie’s first season in the 450SX class of Monster Energy Supercross has been solid so far, the Brit making each main event since his debut at Orlando 2, with the best finish of 13th at Arlington 3.

The transition from MXGP’s to Supercross hasn’t been easy for him though. While he’s been getting laps in on the public Supercross tracks in California, he has no training facility to call home and the tracks he’s been riding are a quite different from what he see’s when he lines up for a main event.

He spoke to the media about what he’s been facing during his transition in a virtual round table following his third race of the season at Arlington 1.

“It’s a difficult one,” Anstie explained, “because on outdoors I’ve got a lot of experience with GP’s. I can kind of actually now realize when [Ryan] Villopoto goes to Europe or when guys go to Europe and race GP’s and you watch them struggle a little bit, I can understand that now because I’ve got such a feel and I know exactly what to do with the bike in those sort of situations.

“Whereas here, even [at Arlington 1] I hit the whoops and I was thinking every track that I’ve ridden has always had a set of whoops out of a turn, I haven’t actually hit a set of whoops with a bit of speed.

Anstie’s approach took him to his best finish of the season at Arlington 3, as he continues to progress as his season rolls on. One thing he says has been easier here than on the MXGP circuit is most definitely travel.

“Traveling in America,” he continued. “is a hell of a lot easier than traveling in Europe or worldwide you know? You can fly from California to Florida and there’s still Whole Foods. You can still go to Target you can still get your main food.

“Whereas you fly to Indonesia and you’ve got a five hour layover and you’re going to a random place and you learn to live off of just rice and tin [canned] tuna. Actually my team make fun of me all the time because that’s all I eat anyway at the track is rice and tuna, but that’s just because I’m so used to it from GP’s.

“But yeah when you’re traveling to these races, to Thailand to Russia to wherever, the traveling planning is a lot more – you can really make percentages if you travel at the right time for you’re sleeping and getting your work done.”

Anstie’s outlook for the remainder of the season is to just continue logging laps, which he’ll get to continue when the series returns this Saturday to kick off a three race residency at Atlanta Motor Speedway.

“I think I’m going to keep making progress, I’m here just to do my laps, build and take all the information that I can and learn, that’s what I’m here for.”