The Rocky Mountain ATV/MC KTM rider on new surroundings and what's holding him back. 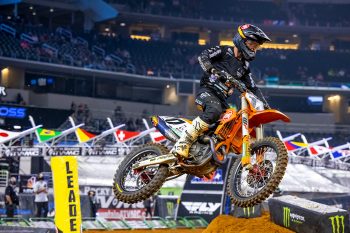 After Star Racing purchased the training facility he called home for years, Joey Savatgy spoke to the media about his move to the 83 Compound and what it’s done for him so far in a recent Supercross round table.

When you look at the 450SX results sheets from the 2021 Monster Energy Supercross season, it may seem as though it’s been an up-and-down season for the Rocky Mountain ATV/MC KTM rider, but Savatgy’s results don’t speak for the pace he’s had so far this season.

After being forced to switch up the riding facility he uses as a training ground, Savatgy says riding with the likes of Jason Anderson, Justin Bogle, and the Lawrence brothers has been a game-changer.

“For me I felt like it was time to make a change,” Savatgy said. “To have the opportunity to go down south, to be in clermont and to ride with those guys has been really helpful.

“As soon as Jason [Anderson] got down there, for me it was a game changer. It took a little while for things to catch up but having somebody around that is as good as they are, helps you whether you know it or not.

“You know on those days that you don’t really want to, not that you don’t want to do the work but you feel like you’re maxxed out, you know when someone’s there going faster, you always find that little bit more that you felt like you didn’t have.

“On top of that the vibe is really good, the group of people that we have is awesome. We have a good time but we also take it very serious and make sure to get our work done. All in all it’s been a good switch.”

In terms of results so far this season, Savatgy pointed to starts and heat races as two things that are holding him back from better finishes in his 2021 campaign.

“Honestly it’s really tough right now to get a bad start and do well,” he continued. “Obviously having a good heat race is I think honestly probably more important than even qualifying good. Obviously the field is cut in half so even if you qualify 15th or 18th, you still have a decent gate pick in the heat race.

“But if you come to the heat race and do well enough to get yourself an eighth-place gate pick or better [for the main event], you put yourself in a really good spot. My heat races this year have not been the greatest.

“My speed has been a little bit down, some of it is I’ve just been battling things and not being super comfortable, missing all of last year didn’t help and you forget, these guys are quick and they hang it out on the edge.

“Starts are huge and I think as long as I can get good starts and put myself in a good spot then yeah I think the results will come. It’s just a matter of putting it all together throughout the day.”

After a three-week break in action, Savatgy and the rest of the field will return to the track this Saturday, to kick off a three-race residency inside Atlanta Motor Speedway.