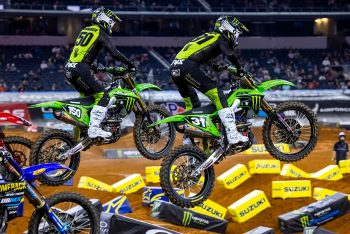 Monster Energy Pro Circuit Kawasaki’s Cameron McAdoo and Seth Hammaker raced to another double podium inside AT&T Stadium, with McAdoo earning his fourth podium finish this season in second and Hammaker with his second podium in third. As the series takes a short two week break, McAdoo sits second in the championship standings two points out of first and Hammaker in sixth. Teammate Jordon Smith went down in his heat and was unable to continue for the main event.

After a tough night on Tuesday, McAdoo was ready to prove he was capable of being at the front challenging for the win. He earned his fourth heat race win in five races, setting him up for a good main event. McAdoo shot out to a great start and settled into second. He pushed the entire race, coming across the line as the runner-up. His fourth podium put him in a good position in the championship, sitting just two points out of the lead.

“It’s good to get a good result, but every point counts and we need to win,” said McAdoo. “There are plenty of positives to take away from the race and we’ll take advantage of these two weeks off to come back out fighting for this championship in Atlanta.”

Like McAdoo, Hammaker wanted to use the final round in Arlington to redeem his Tuesday showing and he made it count. He got a decent start in the main event, but after coming together with another rider he had a little bit of damage to the bike. Hammaker wasn’t going to let that stop him from pushing towards the front and he went from sixth to third during the 15 minutes plus one lap race.

“It was a hectic first few laps and I was mostly just trying to find a good flow,” said Hammaker. “It was a tough track and with all things considered, I’m happy that we were able to make it back on the podium. I’m looking forward to finishing out the season strong after our break.”

**The next race takes place in Atlanta, Georgia, on Saturday, April 10, and will be broadcast LIVE at 3:00 p.m. ET on Peacock and NBC Sports.