What you should be watching for as 2021 season enters final stages.

The 2021 Monster Energy Supercross season is past the halfway point, with just five races to go. As the series takes a three-week hiatus, we thought it’d be timely to highlight the Top 10 topics to follow when the series gets back underway. 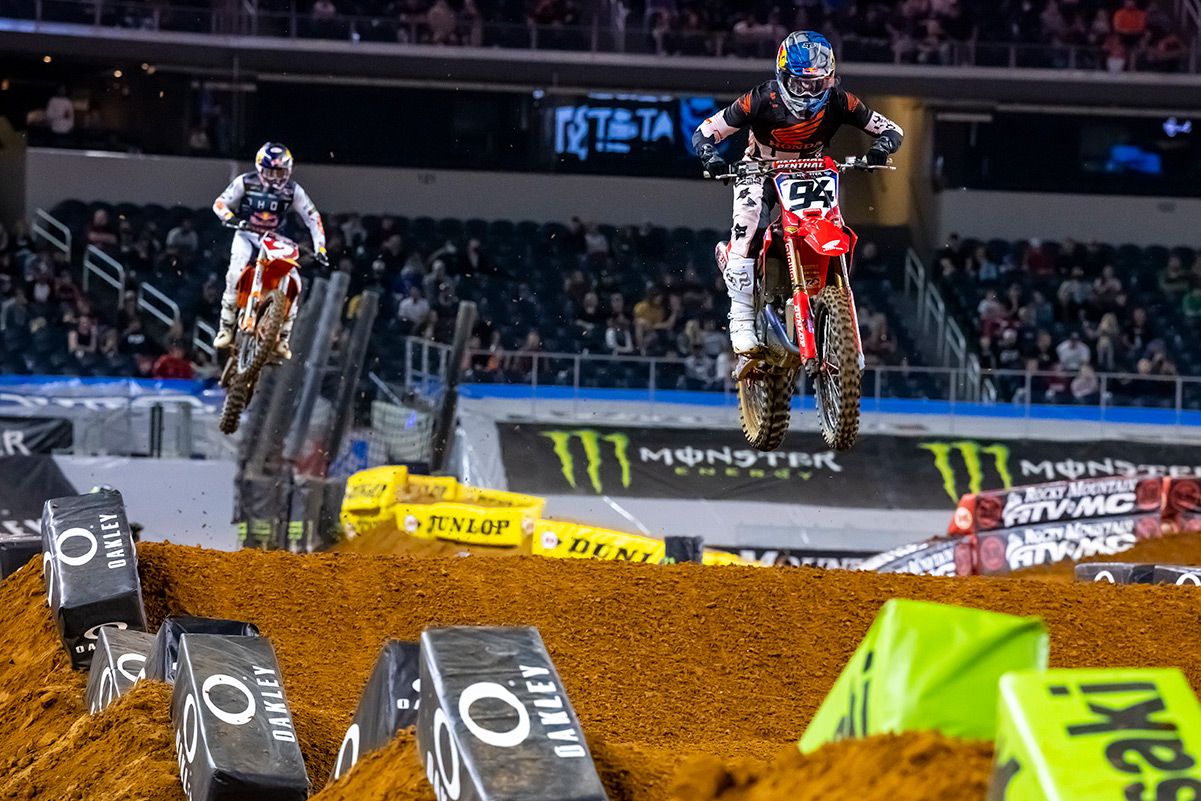 1. Cooper Webb vs Ken Roczen:
One of the bigger rivalries we’ve seen in the sport in recent years is brewing as the 450SX championship comes to a close. Webb is now 15 points ahead of Roczen, with just five rounds remaining on the schedule. Winning five of the last six races, it seems to be Webb’s to lose. Roczen meanwhile has been level-headed, remaining calm as he knows anything can happen in five races. The question now is, can Roczen find the pace to notch a few more wins and bring himself back into contention?

2. Barcia’s hunt for second win:
With a win at Houston 1, Justin Barcia has now won three season openers in a row. The catch is, those have been his only wins in the last three seasons. Barcia has been vocal about not wanting to be known as the ‘one and done’ winner and is hungry for that second win. He finished just over five seconds off of the lead at Arlington 3, proving he’s got the pace to take another victory by the end of the year.

3. The battle of Monster Energy Star Racing Yamaha:
Star Racing’s take over of the factory 450 effort for Yamaha was a huge move for the team. Not only did they take on the premier class program, it added three riders to their roster. Those three riders, Aaron Plessinger, Malcolm Stewart, and Dylan Ferrandis, have put up some impressive performances throughout the season. With all three riders sitting in the top 10 in the championship standings, it’s been interesting to follow the trio as they battle for the top spot on the team. Plessinger’s surge from Daytona forward has put him in the top spot so far, with Stewart just four points back.

4. Hunter Lawrence form:
After scoring back-to-back podiums and his first 250SX win, Lawrence secured the red-plate for one round round. The Australian’s hiccup at Arlington 3 and subsequent fifth place saw him lose the points lead, but he’s still well in contention for the championship, just six points out of the lead.

5. Residency sweep chance for Tomac:
After taking his fifth win at Daytona in round nine, Tomac tied Ricky Carmichael’s record. Nearly out of the championship race, Tomac’s going to need to stack wins in a hurry if he has any hope of defending his championship. Luckily for Tomac, the tracks for the next three rounds look quite similar to Daytona’s famous layouts and will be his best chance to sweep a residency for the year. 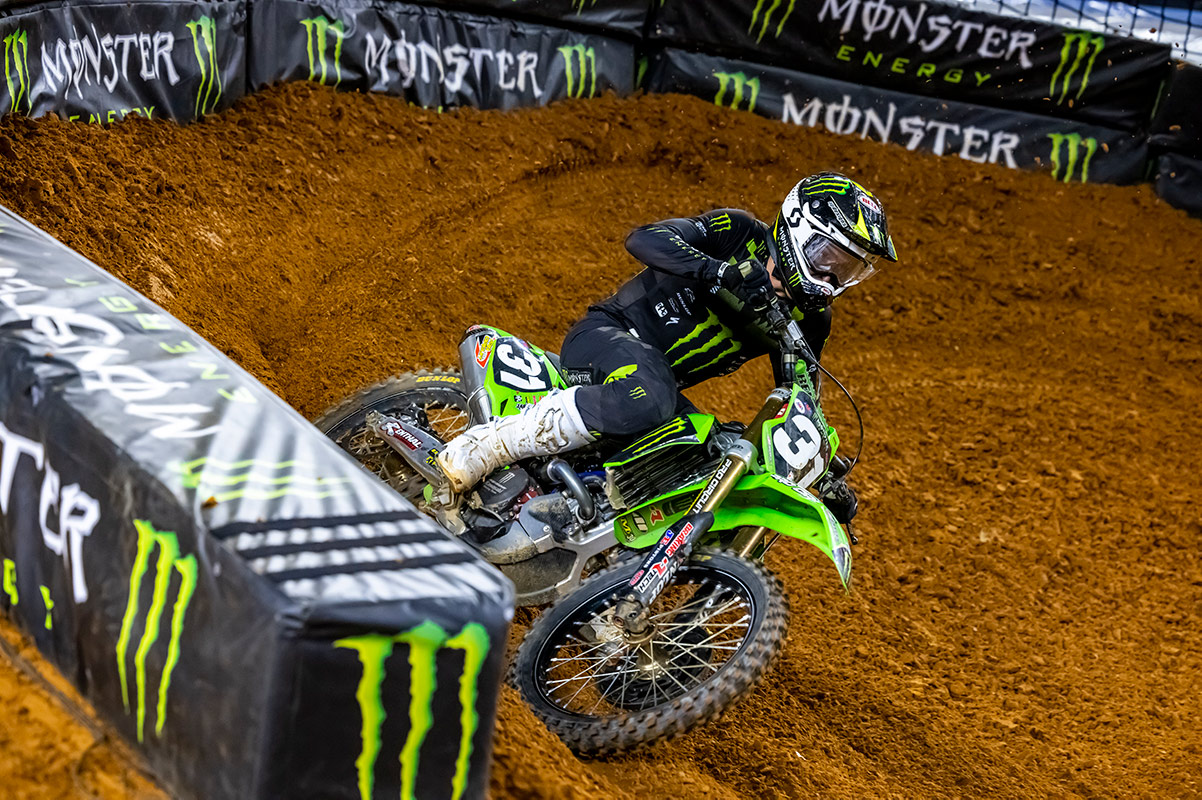 6. McAdoo’s title challenge:
McAdoo was flagged as a potential title contender for the 250SX West crown heading into the season, but many thought Justin Cooper could run away with the crown. Cooper’s dominant performance in the opening round looked ominous for McAdoo’s chances, but his win at the second round put him right back in the fight. Since then the two have had their share of ups and downs, leaving them just two points apart as the series heads into the final few rounds. McAdoo kept Cooper within reach through much of the Arlington 3 main event, making this title fight worthy of attention to as the series heads to Atlanta.

7. Sexton 450SX podium bid:
The speed that Sexton has shown in his rookie 450SX season is not evident in his results. He looked to be heading toward his first win at Houston 2, setting a blistering pace with the lead, but ultimately crashed out, sustaining an injury that kept him out for much of the season. Now with four races under his belt in his return, Sexton will surely be looking to grab a podium before the season’s out.

8. Breakout season of Swoll:
In a make-or-break year, Swoll has risen to the occasion so far. Taking his first career podium at Arlington 2 and finishing inside the top five in three of the first five rounds so far. His speed has been consistent and he’s currently tied for fourth overall in the championship standings, just 15 points back on the leader.

9. 250SX Showdown looms:
The curveball for both of the 250SX championships is the East/West shootout that is slated for Salt Lake City 2. With a combined main event that will reward points in both series, it’ll be crucial for championship implications. Another intriguing part of the showdown is that it’s the first time we’ll see the full field of 250 competitors go head to head in 2021 before they rejoin for the Pro Motocross championship.

10. Momentum key:
The final rounds of the season will be all-important for everyone. Why so? Because momentum going into the outdoor championship is key. For example, a rider like Zach Osborne could benefit from building momentum in the last few rounds in effort to defend his 450MX title this season. While this isn’t a newfound theory, it’ll be interesting to see who charges the last few rounds.