Return to Daytona ends prematurely after running inside top five. 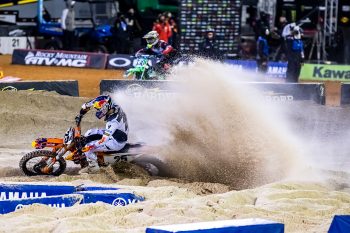 An unusual engine noise was the cause of Marvin Musquin’s DNF in his return to Daytona, after running as high as fifth place in the main event.

As the gate dropped for round nine of the 2021 Monster Energy Supercross season under the lights at Daytona International Speedway, Musquin looked to be in contention for a top-five, starting the race in fifth and maintaining a solid pace.

After a mistake saw him drop down the order, the Frenchman fought his way through the pack and looked to be ready to fight with title contenders Ken Roczen and Cooper Webb just ahead of him for a top-five as the race began to come to a close.

In the closing stages of the race though, Musquin was forced to pull into the mechanic’s area with an issue, which he later explained in a post-race press release.

“I made a mistake and got passed by two guys,” Musquin explained. “but I fought my way back up to Ken [Roczen] and Cooper [Webb], and unfortunately, I started hearing noise in the engine.”

“I didn’t know what was wrong and I couldn’t keep going and take risk with that without knowing what was going on, so, unfortunately, I had to DNF. It’s heartbreaking, I can’t believe it.”

The series now heads to Dallas for a residency that will see three rounds inside AT&T Stadium in Arlington, a venue where Musquin has put his Red Bull KTM on the podium in three consecutive races.