Third upon return a 250SX milestone for Brown 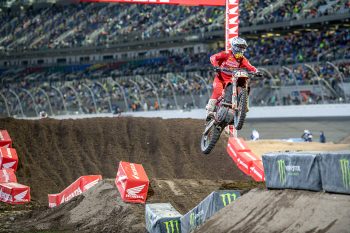 Pierce Brown notched his first career Supercross podium in his return to racing at Daytona following an off-season knee injury.

Brown’s off-season mishap and subsequent surgery on his ACL forced him to sit out the opening round of the 2021 250SX West championship in Orlando. The 18-year-old took to the track Saturday in Daytona to kick off his 2021 Monster Energy Supercross season.

The TLD Red Bull GasGas rider was clearly prepared on his return to the field, managing to find the podium with a third-place finish in his first main event of the year. Brown pointed out that with the highs and lows that came his way in the off-season, he wasn’t expecting a podium so soon.

“I had some highs and some lows during my downtime,” Brown explained, “and thought it would be a while before I was back up here, but first race back and a podium – this is awesome and I’m so stoked!”

After finishing third in his heat race, Brown’s main event start saw him cross the line in ninth after the first lap. He battled his way through the pack, getting himself into third in the closing quarter of the race, maintaining the position to the checkered flag, despite pressure from championship favorite Justin Cooper (Monster Energy Star Racing Yamaha).

“I had a really good start,” he continued. “I got shuffled back for the first couple of corners but I got into my pace, started making passes, and next thing I know I was in third. I saw the white flag coming and I knew Justin [Cooper] was right on me, so I knew I had to make it happen.”

Brown will look to carry the momentum from Daytona into Dallas this weekend when the series returns to action for the first of three rounds inside AT&T Stadium in Arlington.