Hard work at the test track beginning to pay off for Ohio native. 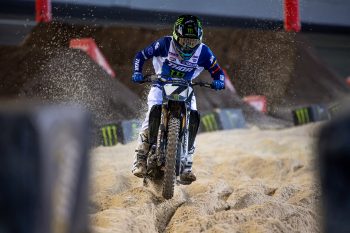 Two years after lining up for his first premier class main event in Monster Energy Supercross, Aaron Plessinger has arrived on a 450SX podium with his third-place finish at Daytona on Saturday.

After spending two years under the factory Yamaha banner, Star Racing took over as the flagship 450 effort for Yamaha, putting Plessinger in a familiar environment with a team he spent many years with throughout his career in the 250 class.

He says it’s the hard work during testing with the team that led to his first premier class podium on Saturday night at Daytona International Speedway.

“We’ve been putting in the work,” Plessinger explained. “We’ve been trying things left and right. I’ve been kind of the guinea pig with it, which I appreciate. I love trying new things especially if they work.”

“It was an awesome day from the get-go, I qualified eighth and the heat race went awesome. Starts were great all day and yeah, I loved it.”

“I wish I could have kept it up there at the end but Cooper [Webb] outplayed me. All I can ask for was a podium. It’s been two years since I’ve been on the 450 and this is my first podium, so it’s been a long time coming.”

Plessinger and the rest of the 450SX class will now prepare for a three-race residency in Dallas, as the series moves to AT&T Stadium in Arlington starting this Saturday, 13 March.