Red-plate holders lead the pack into the night program. 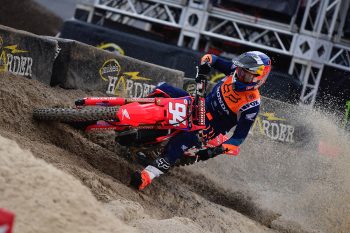 The current championship points leaders Ken Roczen and Justin Cooper topped the qualifying sessions at Daytona International Speedway, as the field is now set for round nine of the 2021 Monster Energy Supercross series.

A threat of rain in the forecast for Daytona International Speedway saw an abbreviated schedule put into place, leaving riders with just two sessions to get up to speed on the track, as the untimed practice sessions were canceled.

Fortunately, there was little rain that actually pushed through, leaving the track in perfect condition as qualifying got underway.

Team Honda HRC’s Roczen’s 1m08.019s lap was the benchmark at the top of the leaderboards in the 450SX class, ahead of Dylan Ferrandis (Monster Energy Star Racing Yamaha) who carried the momentum from Orlando where he had impressive pace despite his result.

After leading the opening qualifying session of the day, Eli Tomac (Monster Energy Kawasaki) logged a 1m08.260s to take the final spot in the top three. He’ll be looking to rebound as the gate drops this evening after a tough go at the first half of the season.

Cooper Webb (Red Bull KTM) took fourth, putting himself in a great position going into the night program, where he’ll continue to challenge in hopes of taking the red plate from Roczen. He was followed by his teammate Marvin Musquin who rounded out the top five with a 1m08.613s.

Sixth went to Chase Sexton (Team Honda HRC) who’s returning from injury after six rounds off due to injury, as Jason Anderson continued his run of solid form over the last few weeks, ending the session seventh.

The first rider in the 1m09s range was Aaron Plessinger (Monster Energy Star Racing Yamaha) who was followed closely by his teammate Malcolm Stewart. Justin Barcia’s(TLD Red Bull GasGas) 1m09.223s lap gave him the final spot in the top 10. 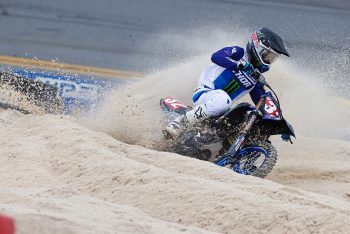 Justin Cooper has picked up where he left off in Orlando, leading both qualifying sessions in the 250SX West class to start the day. The points leader finished the second session with a 1m08.913s lap, followed by Monster Energy Pro Circuit Kawasaki’s Cameron McAdoo who was just over 0.500s back.

Rounding out the top three was Garrett Marchbanks (ClubMX Yamaha), completing a replica of the top three from the Orlando 2 main event. Fourth place went to Seth Hammaker (Monster Energy Pro Circuit Kawasaki) who finished just ahead of Hunter Lawrence took the final spot in the top five with a 1m10.486s.

Jordan Bailey was the first rider in the 1m11s range in sixth, followed by rookie’s Stilez Robertson in seventh and Ty Masterpool (GasGas) who logged a 1m11.397s.

Monster Energy Pro Circuit Kawasaki’s Jordon Smith returned to the track after a race-ending crash in Orlando which he escaped without any injuries. He’d finish in ninth on the afternoon.

The final spot in the top 10 went to Chris Blose (GasGas) while TLD Red Bull GasGas riders Ryan Sipes and Pierce Brown made their first appearances in supercross this season, taking 11th and 12th. Alex Martin (Yamaha) also returned to action following his crash on lap one at Orlando, in which he suffered a concussion, to take 14th. 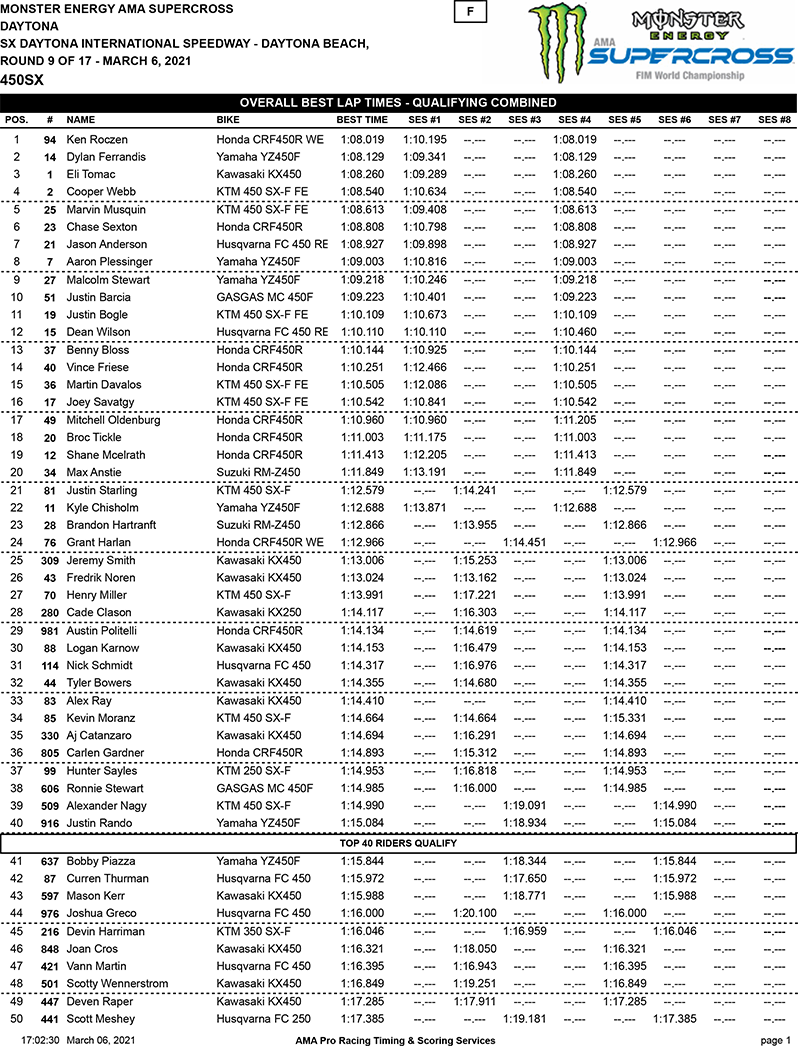 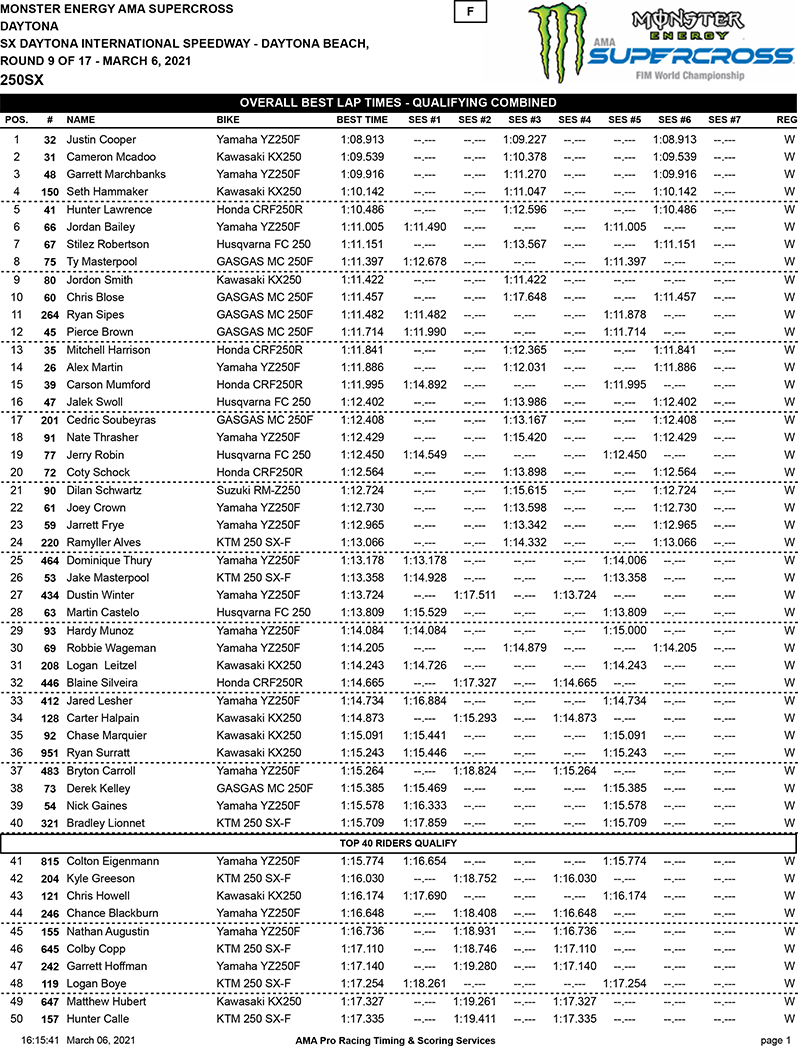