Rating riders who sit 10th through 15th in the 2021 points at halfway.

The 450SX class in the 2021 Monster Energy Supercross season has one of the deepest fields of talent we’ve seen in recent history. While the usual suspects from the last few years have taken over the top spots in the chase for the championship, the battles in the mid-pack have been tighter than ever. In this edition of Rated, we take a closer look at the riders who occupy spots 10 through 15 in the standings to recap how they’ve performed up to the halfway point of the season. 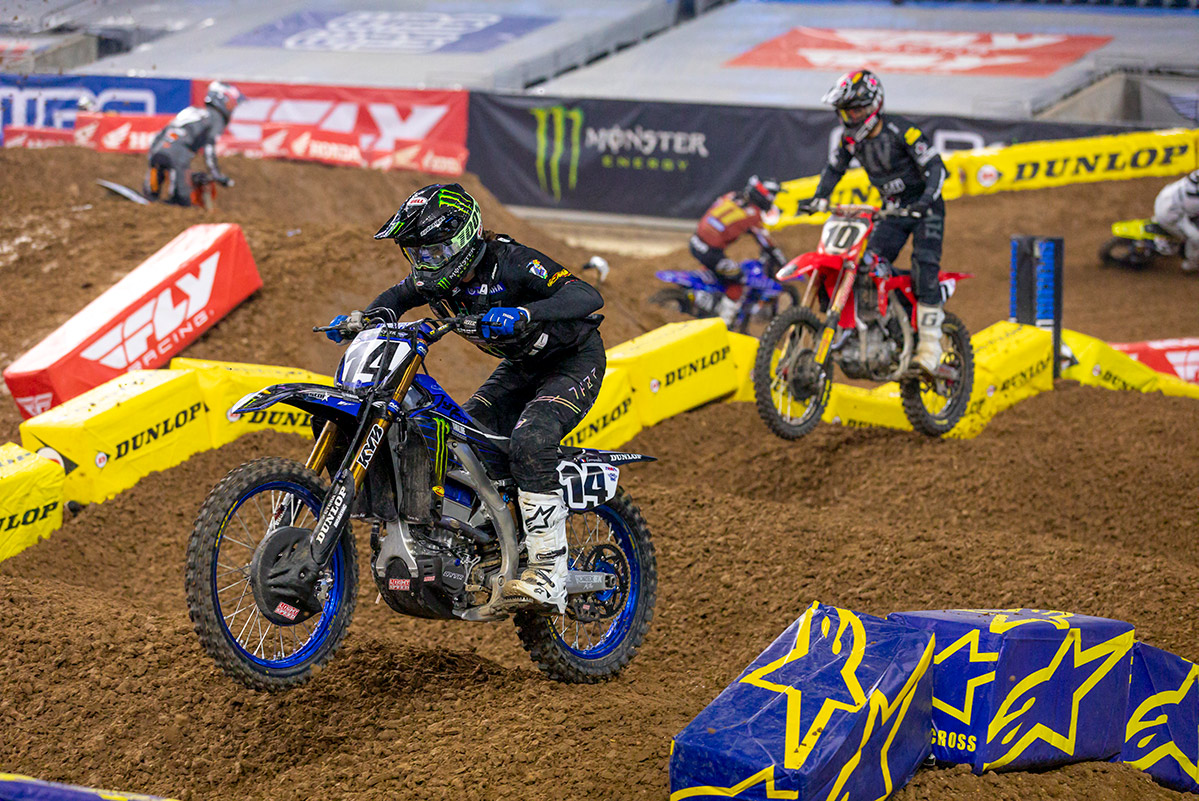 Rider: Dylan Ferrandis
Rating: B+
Rundown: Ferrandis’ rookie campaign in the 450SX class has been a bit of a rollercoaster. The Monster Energy Star Racing Yamaha rider was fresh off of both a 250SX West Supercross and 250MX Pro Motocross championship as he entered the premier class and so far has shown that he has some serious pace on the 450. Just two rounds in Ferrandis landed on the podium with a second-place at Houston 2 and has managed to finish inside the top 10 at five out of the first eight rounds. The lows of his first season in the class haven’t been so low when you look at it and he’s got some momentum coming into the second half of the season. On paper, his 22nd (DNF) from Orlando 1 and his 11th at Orlando 2 might look like a total loss, there were positives to be found from the latter of the two. A bent shifter forced the Frenchman to pull into the mechanic’s area in the final Orlando race, with him eventually pulling back on track right in front of the leaders. While it looked as though he’d end up going a lap down, Ferrandis managed to pull a gap between himself and the leaders and finish just off the top 10, without ever going a lap down. One would have to imagine he’ll look at that and carry his head high heading to Daytona and beyond, as he sits just 20 points back from fifth place in the championship.

Rider: Jason Anderson
Rating: B-
Rundown: The 2018 450SX champion didn’t have the best of starts to the 2021 season, kicking off the season with a 15th place at the opening round in Houston. The good news is he’s been on an uphill trajectory since his dismal result at the opener. He’s put himself inside the top 10 at every round since aside from the round he missed with a dislocated finger in Indianapolis. One thing he has yet to do is finish deeper inside the top five than a fifth place at Orlando 2, which is what leads us to the current rating. Hopefully, the Rockstar Energy Husqvarna rider will continue the momentum he had going in the last main event at Orlando where he recovered from a near-last place start to eventually pass reigning champion, Eli Tomac, for the final spot in the top five late in the race.

Rider: Justin Brayton
Rating: B-
Rundown: After a hot start to the season, Brayton has had a bit of a rough go through the last four rounds. Let’s start with the positives. He opened the season with three consecutive top 10s, one of those being a podium aboard his Muc-Off Honda inside NRG Stadium at Houston 2. In all three of those races he looked solid, showing solid pace and just how capable the bike underneath him was, factory or not. Since then though, the wheels have fallen off a bit, as he’s been unable to find the top 10 in the rounds that followed the worst of those rounds being a DNF at Indianapolis 2. Things got worse for Brayton just before round eight with a mid-week crash at the practice track forcing him to miss Orlando 2. He escaped with minor injuries and hopefully, the break in the action has allowed him to heal up and get back to the form we saw at the beginning of the season. 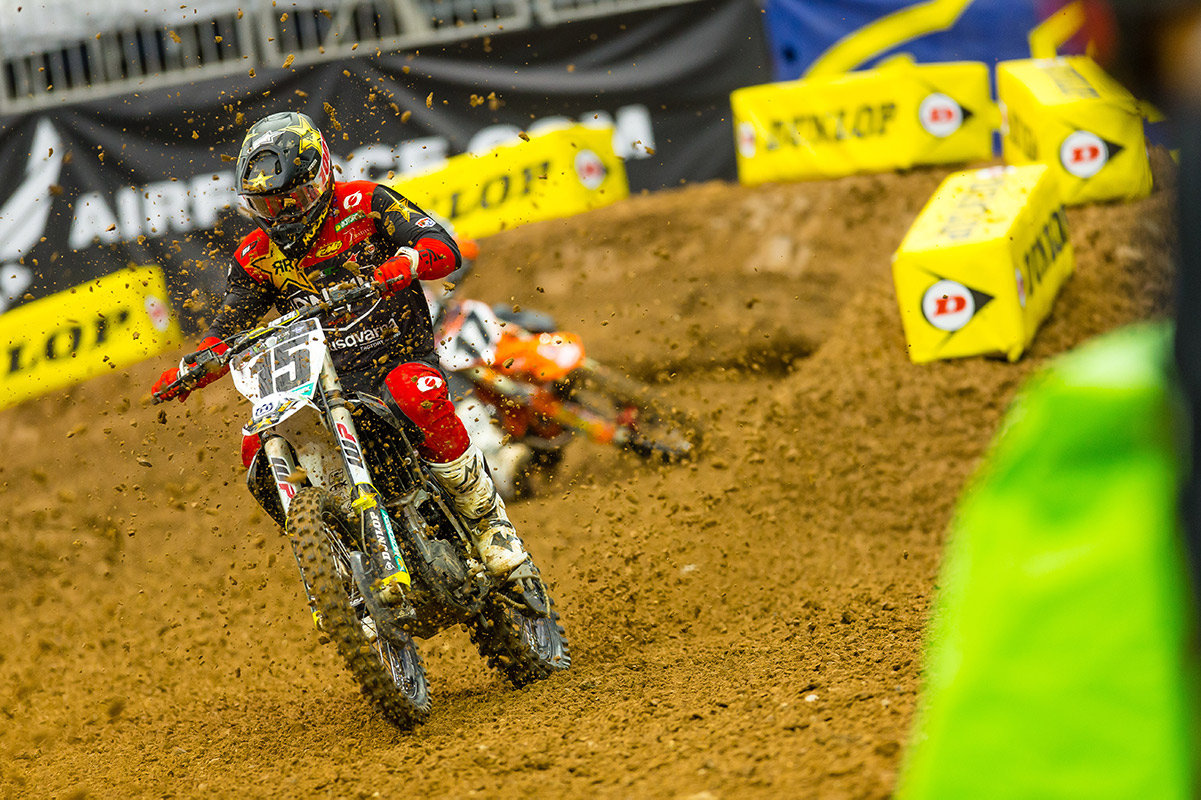 Rider: Joey Savatgy
Rating: C
Rundown: Savatgy’s season looked to be turning around with a trio of top tens in Indianapolis following a tough start in Houston, but his momentum didn’t quite carry over to Orlando for the last two rounds of the first half of the season. Things looked to be coming together for him at Orlando 1 with the Rocky Mountain ATV/MC rider running in sixth for a good portion of the race until a crash derailed his chances, dropping him outside the top 10 where he eventually finished 13th. He’s clearly shown he has the pace to be inside the top 10, it’s just a matter of time before it all clicks and he’s in there consistently.

Rider: Broc Tickle
Rating: C+
Rundown: Heading into the 2021 season, we’ve only seen Tickle in few Supercross races over the past few years. The well documented situation that kept him out of action has been resolved and we’ve finally got him back, this time aboard a Smartop Bullfrog Spas MotoConcepts Honda. While he has yet to break inside the top 10, he’s has a solid run of finishes and has been inching closer and closer as the halfway point closed in. A consistent top 10 guy during his season at Red Bull KTM in 2018 prior to being suspended, it was hard to gauge where Tickle would stack up with the depth of this year’s field. So far he’s done a solid job getting back up to speed and it will be interesting to see if he can become a consistent top 10 guy again going into the latter half of the season.

Rider: Dean Wilson
Rating: C
Rundown: Injury has been the story of Wilson’s season so far. The Rockstar Energy Husqvarna rider had a practice crash that resulted in a broken toe that sidelined him for all of the Indianapolis rounds. Early in the season, he looked solid, finishing just outside of the top 10 at all three rounds in Houston. He somehow managed to pick up where he left off in Orlando, even with the injury lingering he notched two 12th place finishes. He’ll be worth keeping an eye on going forward, as he’ll likely have healed up completely with the break and be ready to battle for top 10s in the back half of the season, plus he will finally be able to put that Ken Roczen blue flag incident behind him once and for all.