The first group of 2022 model motocross bikes have been unveiled by American Honda, the range of latest CRF450R and CRF450RWE (Works Edition) receiving ECU and suspension updates alongside a more affordable CRF450R-S, which is based upon the previous CRF platform.

Just limited updates have been made to the 2022 Honda CRF450R since it was all-new this year, receiving an updated ECU ‘for enhanced drivability, particularly in the lower rev ranges’ after it had received mixed reviews from media in production trim. This latest CRF450R maintains the features that were introduced for the current model, an engine with the focus on bottom-end and mid-range power, hydraulic clutch, Standard, Smooth and Aggressive ignition maps that are selectable via a handlebar-mounted switch, plus Honda Selectable Torque Control offering three levels of intervention and HRC Launch Control.

The handlebar clamps can be adjusted four ways in association with Renthal Fatbars, while riders will also benefit from black D.I.D. rims fitted with Dunlop Geomax MX33 tires and the slim bodywork, with a smooth junction of the radiator shroud and side panel, facilitates rider movement and cornering. 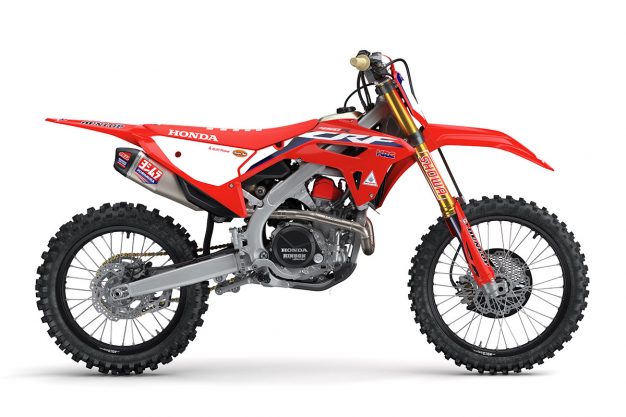 As well, the suspension valving has been revised for better hold-up and improved balanced, according to Honda, and once again the model’s theme continues to be based upon ‘Razor Sharp Cornering’ with three main areas of focus – power, handling and consistency. It will be available from May at an MSRP of $9599.

Once again there will also be a 2022 Honda CRF450RWE, the Works Edition based upon the standard model with updated ECU and suspension settings, but with a list of upgrades in line with those used at Team Honda HRC. Updates include a Hinson clutch basket and cover, Yoshimura full titanium exhaust, Twin Air air filter, Throttle Jockey Team Honda HRC graphics and Throttle Jockey seat cover. As it was this year, the 2020 specification CRF450R remains on the market at $8599, however, this time around it is under the 2022 Honda CRF450R-S model designation that will officially be made available in dealers from September. For more information on Honda products, go to powersports.honda.com.