Osborne suffers back injury before Orlando 2

The Rockstar Energy Husqvarna rider is expected to return at Daytona. 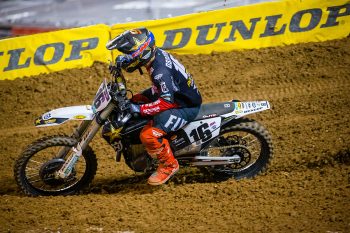 Rockstar Energy Husqvarna’s Zach Osborne announced he sustained a back injury prior to lining up for Orlando 2 with post-race exams confirming a bulging disc in his lumbar spine.

After a podium finish at the first of two Monster Energy Supercross rounds in Orlando, Osborne returned to Camping World Stadium on Saturday nursing injury, taking to Instagram to break the news nearly a week after the event.

“Last Tuesday prior to Orlando 2,” Osborne explained. “I got a weird sensation in my back after a big seat bounce, I tried to ride Wednesday a little and Thursday a little with no real improvement. I went into the weekend knowing it would be a slight struggle but it was a little more than I anticipated.”

Despite the injury, his pace seemed relatively unaffected, eventually finished eighth in the main event, securing valuable points in the championship. Following the race Osborne followed up with doctors, eventually getting to the bottom of the issue and outlining a plan for recovery and return to action.

“After some exams this week,” he continued, “I found out I have a bulging disc in my lumbar spine. I’ve done a lot of therapy this week and it’s coming back into a comfortable range so I’m hoping to be a little closer to normal by Daytona. Look forward to being back at 100% and getting back to having some fun at the races.”

With just over a week to continue recovery, he’ll return to action sitting seventh overall in the championship when the gate drops at Daytona Motor Speedway.