Red-plate holder moves on after fourth place at Orlando 2. 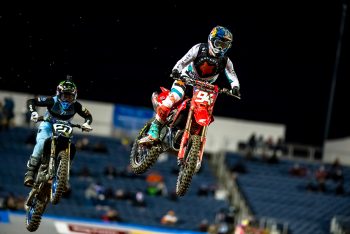 After a strong start to his 2021 Monster Energy Supercross campaign, Ken Roczen is shifting focus from Orlando to getting his first Daytona supercross win.

The current 450SX red plate holder has finished inside the top five at all eight rounds so far this season. Notching three wins and only missing the podium twice as he chases his first supercross title in the premier class.

At round 8, the Team Honda HRC rider recovered to finish fourth, after a tough start saw him enter the first turn in 22nd place. He broke down what went on at the start in a post-race press release.

“The 250 riders were racing,” Roczen explained. “As soon as they moved the tuff blocks, I noticed that my rut was actually very rough and had a big kicker in it. As the gate dropped, I fed my clutch and my front wheel just hit that kicker dead on and my front popped up and really messed me up.”

While he lost points to championship rival and eventual race winner Cooper Webb, Roczen is content with where he ended up in Orlando and is focusing on getting his first win at the infamous Daytona supercross.

“We did some damage control and came in fourth and I’m really looking forward to Daytona. I’ve always wanted to win that round, so I’m going to put all my focus on that.”

He’ll have two weeks to prepare, before kicking off the second half of the season at Daytona Motor Speedway on 6 March.