Tomac ’fought as hard as I could’ to claim sixth

The Monster Energy Kawasaki rider looks to rebound in Daytona. 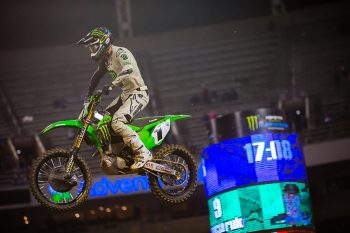 Reigning 450SX champion Eli Tomac fought to manage a sixth-place finish in the Orlando 2 main event, despite a top-five start in the race.

The Monster Energy Kawasaki rider put himself in a good position to return to the top three at the start of Saturday’s main event at Camping World Stadium, battling with Justin Barcia (TLD Red Bull GasGas) and Ken Roczen (Team Honda HRC) for much of the race inside the top five.

“Today was just not my day,” he explained. “In the main event, I had a decent start and was able to get into a good position inside the top five where I had a solid three-way battle going with [Justin] Barcia and Ken [Roczen]. I fought as hard as I could tonight, but it was only good enough for sixth place.”

While he hasn’t had a stellar start to his title defense, finishing the last three races off of the podium, the Colorado native has managed to keep himself in title contention with consistent top 10 finishes. He now sits third overall, just 31 points back from red-plate holder Roczen, as the series approaches the halfway point.

“We have the next weekend off from racing, so we will regroup and come out swinging at my favorite place to race, Daytona.”

Tomac will be a favorite to win as the series takes to the track at Daytona Motor Speedway on 6 March, a venue where he’s been notoriously fast.