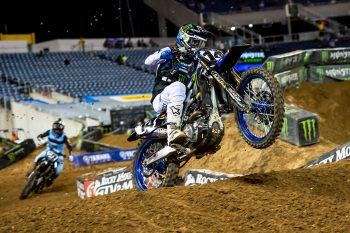 Dylan Ferrandis (Monster Energy Star Racing Yamaha) was denied a better finish after having to pull into the pits to fix an issue with his shifter during round eight of the 2021 Monster Energy Supercross series in Orlando.

The second of two rounds inside Camping World Stadium started off great for Ferrandis, topping the opening 450SX class qualifying session before ultimately finishing the afternoon by qualifying third overall.

Things took a turn in the night program for the 450SX class rookie. After a decent start in his heat race, an aggressive move late in the race by his teammate put him on the ground, leaving him to barely make the main in eighth place.

In the main event, things got even more frustrating for the two-time 250SX champion. After battling his way inside of the top 10, Ferrandis caught a tough block, causing damage to his shifter that resulted in him having to pull into the mechanic’s area to repair it. By the time the issue was resolved, he pulled out just in front of the leaders.

In the laps that followed Ferrandis showed great pace, eventually pulling away from the leaders and avoiding going a lap down. He was able to work his way up to 11th after all was said and done, a result he was not pleased with.

“I am not happy,” Ferrandis said following the race. “But I gave everything I had to come back after hitting the tough block and losing a lot of time in the race. I’m happy to have the weekend off to do more work and get ready for Daytona.”

Ferrandis now sits 10th in the championship standings after finishing all but three races inside the top 10 so far during his rookie campaign. The series now has an off weekend before returning to action at Daytona Motor Speedway on 6 March for round 9 of the championship.