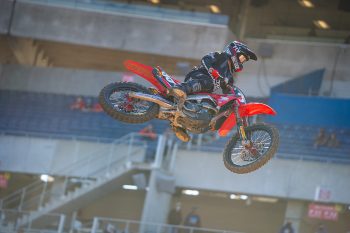 Round eight of the FIM World Supercross Championship proved a busy night for the Muc-Off Honda Racing team.

Mitchell Harrison’s debut for the team on the CRF250R resulted in a missed opportunity for a strong finish. After a crash whilst battling for 6th, the young rider ultimately finished 14th.

“This is on me; I was impatient and I crashed trying to make a pass. My times in the final were okay but I struggled in some areas of the track. I am glad we have two weeks until Daytona and I am thankful I didn’t hurt myself in the crash.” Harrison said.

This event also marked Harrison’s first race back to Supercross since April 2019 and he is looking forward to rebounding in Daytona.

“I know what I need to work on, it was frustrating because I rode tight and nervous. I have already put this race behind me and am focused on redemption at the next round.” Harrison finished.

The team’s 250 East Coast rider, Mitchell Oldenburg took on the 450 class as he stepped in for an injured Justin Brayton. Oldenburg looked confident early, setting lap times inside the top 20. Unfortunately, his starts let him down and he didn’t make the final.

“We were fast enough to be in the final, but I didn’t capitalise on my speed. My start in the Heat race wasn’t where it needed to be and I battled for 11th. In the LCQ (Last Chance Qualifier) I came together with another rider on the first turn and had to make my way back from 15th. It was super sketchy and I could only manage a 6th. In all though it was a great experience and I hope to do it again at some point.” Oldenburg remarked.

Although Justin Brayton was side-lined, the Muc-Off Honda 450 rider was busier than ever; partaking in several media requests which included commentary on the Supercross broadcast Race-Day Live, as well as podcasts and videos.

“It was a full-on day, I can’t believe how much happens behind the scenes while we are out there racing. I just want to thank the people at Feld for having me, it was fun, but I can’t wait to get back to racing,” said an exhausted Brayton.