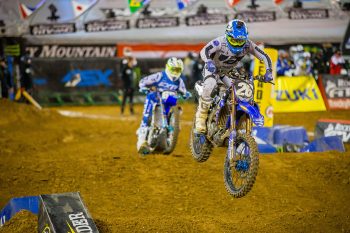 A crushing first lap incident in the opening round of 250SX West ruled Alex Martin out of Orlando 2 with a concussion, but he’s expected to be fit to continue at Daytona following a two-week break in Monster Energy Supercross.

Martin had signed to the Manluk Rock River Yamaha Merge Racing team for the 2021 campaign and entered the series as a podium threat, however, that ended before the first main event of the year almost began.

It was a mixed start to the championship in Florida for the 31-year-old Martin, qualifying in eighth position and then claiming fourth in heat one prior to the disastrous 250SX West main event. He was left with a concussion and assisted off-track by the Alpinestars medical crew, before later returning to his pit at Camping World Stadium.

The elder Martin brother’s incident came almost succession with Jeremy Martin (Monster Energy Star Racing Yamaha), who crashed out moments earlier and is understood to have suffered a shoulder injury. Star Racing has confirmed that he has had an MRI this week and is awaiting results.