Shoulder recovery not quite at 100 percent in 250SX West opener. 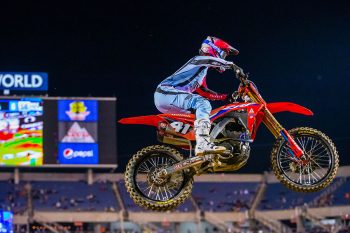 A fifth-place finish in the opening round of 250SX West marked a solid start to Monster Energy Supercross for Hunter Lawrence, despite lacking strength in his shoulder through the Orlando 2 main event.

Lawrence entered the season confident that his health wasn’t a problem, however, he admitted post-race that he’s yet to build to 100 percent after experiencing ongoing shoulder problems last year.

Still, the Team Honda HRC rider managed to deliver a consistent effort in qualifying fifth, finishing third in his heat race and then pressing on to fifth in the main event. Those results left him content at the conclusion of the opener.

“My Supercross season debut was pretty good – I’m pretty happy with it,” Lawrence recalled. “We checked off a lot of the goals we had set during the pre-season, with the limited time we had coming back from my shoulder recovery. That held me back a little bit to be honest – the strength was a big issue – but cardio and fitness have been great and I’m feeling really good.

“We just finished the sixth week on the bike, so I can’t complain. My starts were good until [the] restart. I put in some good, hard laps and was able to charge all the way back up to fifth from a bad start, so I’m content with the night. I got a solid one on the board and I’m looking forward to gaining more strength in my shoulder and coming back swinging at Daytona in two weeks.”

A renowned Lucas Oil Pro Motocross title threat when at full fitness, it’s expected that Lawrence could factor into the podium mix and stand a chance at victory when the Supercross season continues following a weekend off at Daytona on Saturday, 6 March.