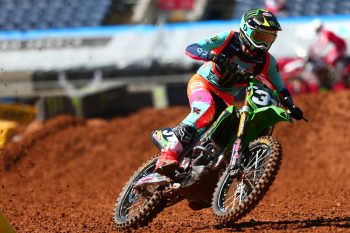 Round 8 of the Monster Energy® AMA Supercross, an FIM World Championship kicked off a new championship in Orlando, Florida on Saturday as the 250SX Western Regional Championship got underway. Cameron McAdoo, Jordon Smith, and Seth Hammaker, aboard their new KX™250 motorcycles, made their 2021 season debut under the prestigious Monster Energy/Pro Circuit/Kawasaki awning. McAdoo led the charge for the team with his career best second place finish, while Hammaker had an impressive night with a sixth place finish in his first career 250SX Main Event. Teammate Jordon Smith unfortunately suffered a crash in the whoops, while running down the leader that ultimately ended his night early. In the 450SX class, Monster Energy Kawasaki rider Eli Tomac earned a sixth place finish, while teammate Adam Cianciarulo finished in 20th place after sustaining a crash.

The excitement of the new 250SX Western Regional championship began on Saturday morning when the No. 150 KX250 machine of Hammaker qualified second overall out of the 250SX B qualifying group. His veteran teammates of Smith and McAdoo qualified out of the 250SX A group and their combined times were fast enough for fourth and sixth place heading into the night show.

The entire Monster Energy/Pro Circuit/Kawasaki squad lined up for the first 250SX heat race of the night and as the gate dropped all three KX250 machines rocketed out the gate and came sweeping around the first turn. It was Hammaker nailing the holeshot in his first career heat race and led for the first three laps of the race. Right behind him was another battle as his teammates McAdoo and Smith were hot on his heels jockeying for position. McAdoo would eventually find a clean place to pass his rookie teammate and lead the remaining six laps to take the first 250SX heat race win of the night with Hammaker close behind in second, while Smith suffered a minor crash that ultimately forced him to finish in fifth place.

As the gate dropped for the 250SX Main Event multiple riders went down on the first lap causing the red-flag to come out, sending the rest of the field back to the start gate. As the gate dropped on the restart, it was the No. 80 KX250 of Smith who rocketed out of the gate nearly missing out on the holeshot with his teammates close behind. Unfortunately for Smith, he crashed at the end of the whoops in the opening laps, ultimately ending his night. The No. 31 of McAdoo made quick work of the competition in the opening laps, and by lap three he settled into second place where he would eventually finish. The rookie sensation Hammaker rode a smart and consistent race without taking any major risks in his professional debut and at one point climbed as high as fourth place in the main event but contact with a competitor would send him to the ground briefly and he would ultimately finish in sixth place.

“It feels really good to start off the season on the podium and shows that all the hard work we have been putting in this off-season has paid off. It was a bit of a hectic day out there with all the carnage going on around us and having that restart in the main event. I am happy with this second place, but I also feel like I could have been on that top step tonight. I know where I can improve and will spend the next two weeks doing that before we head to Daytona.”
– Cameron McAdoo

“My day started out well as I qualified second. I would be lying to you if I told you that I wasn’t nervous lining up for my first pro race tonight. It was awesome when I got the holeshot in the heat race and was able to lead some laps. Once Cameron (McAdoo) got by me, I just wanted to learn from him and see where I could be faster on the track. The main event was pretty wild, and I had a good spot on the restart, but I got some help from another rider who took me out before the finish line jump, so I had my work cut out for me and was able to get back up to sixth. All in all, it was a great first day of getting my feet wet in the class and now have a point where we can build off of. I can’t thank the entire Monster Energy/Pro Circuit/Kawasaki team enough for believing in me and giving me this incredible opportunity to chase my dreams.”
– Seth Hammaker

“Not exactly the result I was hoping for today. Coming into the season, I had been dealing with a thumb injury that has affected my ability to grip the handlebars at times and unfortunately, I paid the price for that tonight. Overall, I was really happy with my riding. I qualified fourth, got fifth in the heat race and was in a great position at the front of the pack in the main event after the restart, but the whoops tonight were eating up a ton of riders and my hand slipped off the bars when I was skimming through them and it just slammed me to the ground. I am just bruised and battered, but I will take the next two weeks to let my body rest so I can come swinging in Daytona.”
– Jordon Smith

In the 450SX class, Monster Energy Kawasaki riders Tomac and Cianciarulo took on the familiar Orlando supercross track as weather conditions prevented the series from changing the layout during the week. It was the No. 1 machine of Tomac who clocked the fifth-fastest time in overall qualifying aboard his KX™450 with his teammate Cianciarulo right behind him sixth.

Assigned to the first 450SX heat race of the night, Cianciarulo found himself in second place behind the current 450SX championship points leader from start to finish and earned the third gate pick heading into the main event. Tomac lined up for the second 450SX heat race of the night and had his work cut out for him after starting outside of the top-10 in the opening laps, but the defending champ would climb back into qualifying position with a seventh place result.

When the gate dropped for the main event, the No. 9 KX450 of Cianciarulo launched out to a first place start where he would lead the first 10 laps of the 25 lap race. Meanwhile his teammate Tomac started out in seventh on the opening laps before moving into fifth where he would find himself in a challenging three-way battle with fellow title contenders and eventually finished in sixth place. As the main event progressed, the local Florida-native rider Cianciarulo engaged in a battle for first position where he ultimately relinquished the position but determined to make a pass back for the lead, Cianciarulo began studying where his opponent was faster on the track. Unfortunately, his night would come to a halt after a mis-timed jump entering the whoops sent the sophomore 450SX rider over the handlebars and ultimately ended his night of racing.

“Today was just not my day. The track conditions were rough at the start, but I had no issues finding traction and qualified in fifth aboard my KX450. In my heat race, I got a terrible jump out of the gate and this track was extremely difficult to pass on, I had to settle for seventh going into the main event. In the main event, I had a decent start and was able to get into a good position inside the top-5 where I had a solid three-way battle going with (Justin) Barcia and Ken (Roczen). I fought as hard as I could tonight, but it was only good enough for sixth place. We have the next weekend off from racing, so we will regroup and come out swinging at my favorite place to race, Daytona.”
– Eli Tomac

“Well, today certainly didn’t go the way we would have liked it too. We had some great momentum all day long. I qualified in sixth, finished second in the heat, and in the main event, I got such a great jump out the gate on my KX450 and was able to just lead some solid laps. Once Cooper (Webb) got by me, I was able to see some lines where he was a touch quicker than me and felt like he wasn’t getting away from me, but as I began to look for lines to try and make a pass back, a lapper threw off my whoop section and I miscalculated my jump into the whoops that resulted in me going down. It was not the way I wanted to end the night, but I can’t thank the Monster Energy Kawasaki team enough for their support on the good days and the bad days.”
– Adam Cianciarulo