Barcia able to overcome practice hit for another podium

The New Yorker is injury-free and looking to regroup before Daytona. 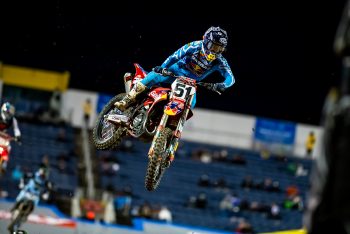 TLD Red Bull GasGas leader Justin Barcia was able to recover and secure a podium on Saturday in Orlando following a qualifying crash that ended his session early.

Barcia’s third podium of the 2021 Monster Energy Supercross season did not come easy. After a solid opening practice session, he slammed the ground in the first round of qualifying.

“Honestly, it was just a weird morning for me,” Barcia said following the main event. “First practice felt good and then I had that crash. It was just a freak crash, I landed on the finish line and probably grabbed too much front brake. It kind of tucked, then caught and fully tucked with my front wheel and I just went flying.”

Barcia returned for the second qualifier to finish 18th overall for the afternoon. After finding his way to fifth in the heat race to kick-off his evening, he eventually landed third in the main event despite pressure from Eli Tomac (Monster Energy Kawasaki) and Ken Roczen (Team Honda HRC).

“The pressure was definitely intense,” Barcia added. “The first half of the race I wasn’t getting through the whoops very well, I was just jumping them but it wasn’t happening for me. I went to skimming and I kind of broke him [Tomac] a little bit, which was cool, but then Kenny [Roczen] came – it was a double whammy for me. Once I started skimming the whoops, I kind of closed on Marv [Marvin Musquin] a little bit, but I was just a little too far off.”

Barcia’s bounce-back performance on Saturday puts him in fourth place overall in the 450SX championship standings. With a weekend off before the series returns for Daytona, Barcia’s looking forward to testing with the GasGas team following improvements made on the weekend.

“We’re working on the bike,” he explained. “I wasn’t able to test this week, but looking to kind of regroup and do some testing before Daytona and get the bike a little bit better for certain conditions. All in all, the team did a really good job today.

“We made an adjustment before the main event and it was positive, for sure. [I’m] definitely gonna keep getting good starts and keep putting myself in a good position – [I’d] definitely like to get back up there.”