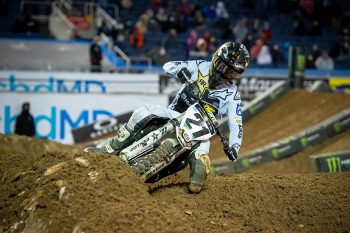 Rockstar Energy Husqvarna Factory Racing’s Jason Anderson made big strides on Saturday for Round 8 of the 2021 AMA Supercross World Championship, earning pole position, a heat-race win and a season-best fifth-place finish in the 450SX Main Event. Additionally, team rider Jalek Swoll secured an impressive fourth-place finish at the opening round of the 250SX Regional Championship in Orlando, Florida.

Anderson was strong all day, beginning with an impressive run in qualifying to top the highly talented 450SX division. He got off to a good start in Heat 2, assuming the second-place position early on. Working his way up to the lead battle, Anderson made his move on the final lap to overtake the lead and capture his first heat-race win of the season. In the Main Event, he started off in 13th and diligently worked his way through the field. Sitting in a solid sixth, Anderson came on strong in the final laps to secure a top-five finish at Round 8.

“My night was a lot better,” Anderson said. “I had a good practice and ended up P1, had a good battle in the heat race and got first in that. In the Main Event, I kind of had a bad start and worked my way up to fifth. I’m getting better and feeling better, so hopefully we’ll have an even better weekend in Daytona.”

Coming off an impressive podium finish at the last round, Osborne had high hopes of keeping his momentum rolling in Orlando. However, he suffered a slight back injury during the final practice session of the day and he struggled with it throughout the night. In 450SX Heat 2, he got off to a sixth-place start and passed into the top-five early on. He kept a steady pace for the remaining laps to secure a fifth-place transfer into the Main Event. In the main, Osborne didn’t have the best start as he came through the opening lap in 11th place but he put his head down and charged up to eighth, where he finished for the night.

“It was a little bit of a tough night for me,” Osborne said. “I kind of tweaked my back in the last practice and I really struggled with it tonight. I had a mediocre start and an eighth-place finish, which is not really anything to write home about but I’ll get it sorted and be ready for Daytona.”

Team rider Dean Wilson continues to battle his way back from a toe injury this season. Wilson didn’t get the best start in 450SX Heat 1 as he rounded the opening lap in 14th. He fought his way up to 10th and put on a strong charge in the final laps but he missed the final transfer by only one spot. He redeemed himself in the LCQ, securing his second-straight LCQ win and a spot in the Main Event. He got shuffled back off the start in the main, where he was forced to come back from 18th on the opening lap. Making a valiant charge up to 11th late in the race, Wilson had a top-10 finish within grasp before it slipped away in the chaos of the final laps and he ultimately finished 12th.

“In the Main Event, I was all over 10th and I got a little bit traumatized from the blue flags and I thought the guy behind me was the leader so I let him by, which put me back to 12th,” Wilson said. “It’s disappointing but I’m looking forward to these next couple weeks to really heal up and get my body healthy. It’s tough to try and race injured but we’ll be back at Daytona.”

The 250SX Western Regional Championship got underway on Saturday with two fresh faces on the starting line. Jalek Swoll qualified ninth in the opening round, where he lined up alongside his teammate Stilez Robertson in 250SX Heat 2. Swoll settled into a top-five position early on before getting passed by a class front-runner and dropping back to sixth. He continued to battle in the mix for the rest of the race, ultimately finishing sixth in the heat. In the Main Event, Swoll began just outside the top-10 but the race was red flagged due to a pileup off the start. Upon the restart, Swoll shot off the line to capture a third-place start and he raced inside the top-three for the first seven laps before getting passed for fourth. From there, he kept a strong pace to ultimately earn a career-best fourth-place finish.

“It was a pretty decent night,” Swoll said. “The heat race was a little hectic and I got shuffled back a bit and finished sixth. That didn’t set me up for a very good gate pick in the Main Event but I made the best of it. I felt like toward the end of the moto I started coming around but by that point it was kind of too late. I’m a little disappointed but we’ll be back next weekend.”

Rookie Stilez Robertson made his supercross debut on Saturday with a solid performance throughout the day. In 250SX Heat 2, Robertson got off to a fourth-place start and he maintained a steady pace to carry an impressive fourth-place transfer into his first-ever 250SX Main Event. In the main, Robertson got tangled up in a multi-rider pileup off the start and the race ultimately got red-flagged. Robertson, despite having a banged up bike and body, lined up for the restart but he didn’t fare so well as he came through the first lap in the last-place position. He did his best to move through the pack but it proved to be difficult following the carnage he sustained early on, ultimately finishing 18th in his debut.

“We had a smooth start to the day with seventh in qualifying and fourth in the heat race,” Robertson said. “In the main, I got a decent start about 10th through the first jump but Jeremy Martin rolled and I thought he was going to jump and I ended up landing on him. I crashed and bent my bike up but I still gave it a go in the main and just tried to salvage what we could, so not too bad thanks to the team.”